Friday Fright Night of the Demon: Casting the Runes 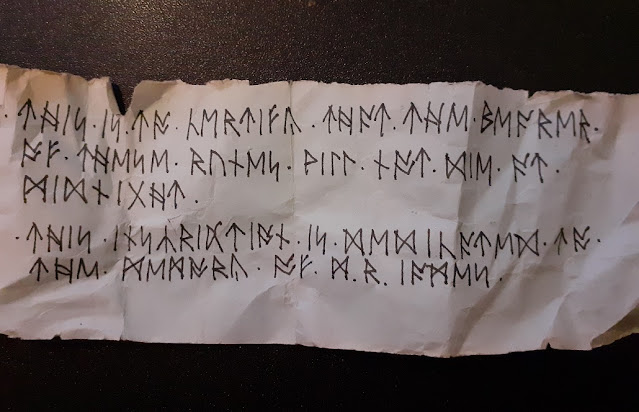 There’s a great Friday Fright Night meme going about this month – masterminded by Curt Evans at The Passing Tramp, and with great work by Kate Jackson at Cross-Examining Crime, and thanks to Bev for the logo.

I’ve done a couple of posts (Lord Dunsany and Ghostylocks and the Three John Dickson Carrs) and when I was doing some blog visiting came across Christine Poulson talking about scary stories, and particularly MR James, and that decided me as to what my next one would be...

MR James’s ghost stories are superb, really beautifully crafted and very unnerving. There’s Whistle And I’ll Come To You My Lad (made into a marvellous BBC TV production a while back). There’s The Mezzotint – a picture changing itself is, ridiculously, a highly unsettling notion for me. And then there’s this one, Casting the Runes. This story and I have history together.

When I was around 15 I went out babysitting to a new (and lovely) family. The parents had been very vague about when they would be back - this was before the days they could have texted me: back then people went out with no intention of contacting the babysitter, and most of the time no way of the babysitter contacting them. I settled in late in the evening to watch a film on TV, in my last innocent moments hoping they wouldn’t spoil it by coming home before it finished. The film was Jacques Tourneur’s Night of the Demon, from 1957, and it pinned me to my seat. It was the most deliciously terrifying thing I had ever seen, and it left me gasping. When it finished, the unfamiliar house was dark and creaking, and the heating had gone off, and I couldn’t move, even to switch on more lights. It felt like I was the only person left alive in the world. There was no sign of my employers and it got later and later...  The couple finally arrived back well after 2am, having had a great time, apologizing and happy and cheery, lighting up the house, horrified it was so cold for me, pressing loads of money into my hand. The night is fixed in my mind forever.

It set me off on a yearslong quest to watch as many Jacques Tourneur films as I could. (What I didn’t have then was the Wikipedia entry on Night of the Demon which is very interesting, and explains the well-known disagreements over whether the titular demon should have been shown in the film.) I also investigated the story on which it was based, and on to all MR James’s other stories – and with thanks to EW who gave me a collection of them.

Casting the Runes is short, and intricate, absolutely stuffed with plot and odd incidents, including an unexpectedly fear-inducing tramride. I imagine it breaks every rule of creative writing classes, and is strangely structured. Two characters have the same name – they are brothers, but still. There is a long hilarious description of a desperate children’s party: ‘several of the smaller children had to be taken out’. Then: ‘a sort of dry rustling noise which sent the children nearly mad’ – a most authentic MR James moment.

Then the creepy tale really gets going, moving from one person to another – which is fitting really, as the key to it is a piece of parchment with some runes (ie ancient writing) on it.

Amid all the brilliant atmospherics, the sinister settings, the creepy people, the disappearing words – the central point is that whoever is in possession of the runes will die at a certain time. So there is the most perfect plotline of people trying to pass it to one another, and trying to avoid it, as time runs out. ‘You’re It.’

I introduced film and story to my now-husband, and so we had a splendid time every so often passing the runes to each other (just a faked up piece of paper at first), we amused ourselves hugely with thinking of inventive ways to do that. ‘Oh gosh can you just take a look at this for me?’ ‘Hey, I’ve got something here I think you’ll be so interested in...’ At a summer school I met an academic who could read and write runes, so I told her this story, and she offered to write out some runes for me to use in our cheery games. That’s them above, I still have the piece of paper more than 30 years later. When she’d finished I asked her what the message said, and she looked solemnly at me and said ‘I’m not going to tell you. Much better if you don’t know.’ MR James would highly approve I think. If anyone can read them, and would be able to tell me what it says – keep it to yourself.**

And now I have passed them on to YOU.

** OK, strictly speaking, it is not that hard to work out what it says. If you dare.