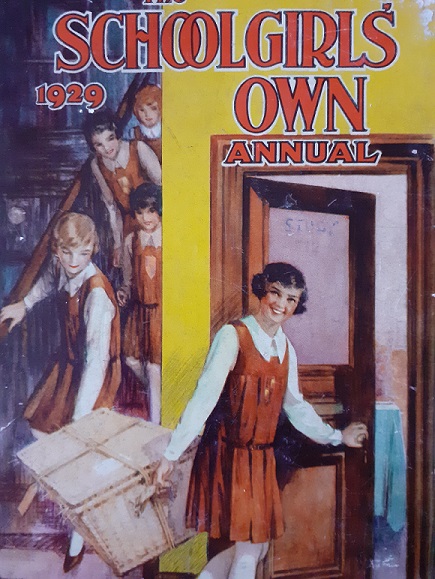 As young people go back to school, here’s a topic for the ages.

I recently did a blogpost on a book by Ursula Orange called Begin Again, (and thank you again Dean St Press) and we looked at the lives of young women in the 1930s, and clothes of the time. But there was a little flashback incident in the book that also hit home – we are big on Clothes Panics on the blog, but this book has a wonderful story from the subset that you would call School Uniform Panics.

My friend Lucy Fisher, in her book Witch Way Now?, mentions the famous Eleanor Roosevelt remark that ‘no-one can make you feel inferior without your permission’. But as Lucy and narrator Anna truly say, ‘Eleanor doesn’t go to our school’. The idea of being at school without the proper uniform is awful, and even the most grownup person must still have the shivers at the thought.

The story in the Ursula Orange book is excellent:

On the day before Henrietta, aged thirteen, went to St. Ethelburga’s, a frightful thing occurred. The shop sent the wrong kind of flannel blouses and there was no time to send them back. It seemed that Henrietta would be forced to appear at her new school, even to travel to her new school, in the wrong kind of blouse. How with such an appalling handicap was she to avoid the frightful blemish of conspicuousness, the worst sin in the whole gamut of a new girl’s crimes?

Everyone tells her it will be fine – the correct blouses will arrive within a week – she can manage till then surely? Henrietta is devastated. But she has an older sister Sylvia, who went to the same school some years before. As Henrietta is in bed grimly considering the prospects -

Sylvia, very grown-up in an evening dress, came up….“I’ve been talking to mummy,” [she says] casually, “and I thought if you’d like it too, I might drive you up to town tomorrow in the car to meet the school train that way. It would mean starting rather earlier, but it might be rather more fun than the train. Also we could go round by the shop and change those blouses. You could put on the right one straight away in the shop. I mean it would save all the bother of sending them back and that sort of things wouldn’t it?”

“Oh, it would, wouldn’t it?” said Henrietta, great waves of thankfulness and rapture breaking over her. “You are an angel, Sylvia.”

And then Sylvia claims to be going to travel up to town anyway (even though it is clear she has no experience of driving in London and finds the idea terrifying) and sits on the bed and chats gently to Henrietta about school and how she will find it. 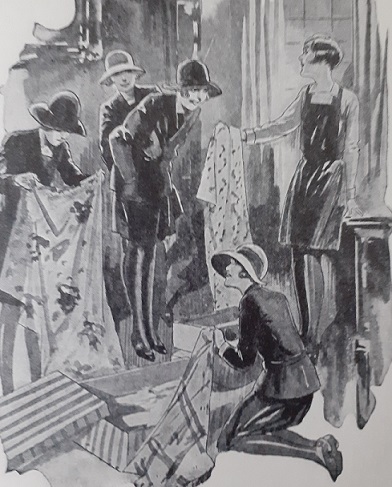 'Look what the new girl's brought! Not proper uniform AT ALL'

Not all stories end so happily. In Antonia Forest’s Attic Term (1976), the girls have been allowed to bring their own supper dresses to boarding school. But Nicola and Lawrie Marlow still have only their old uniform dresses – they are the last in a line of sisters and their mother thinks they should ‘get the wear’ out of all the uniform saved up for them. An elaborate plotline follows, where Nicola tries to find an outfit from a charity shop: harmless, you might think, but many things follow from this.

In the Anthony Powell Dance to the Music of Time series, there is something mysteriously wrong with Widmerpool’s overcoat, it’s not quite right: this is in the first book, A Question of Upbringing, at a school which is plainly Eton. If ever tempted to feel sorry for Widmerpool, Powell always gives you a steer in the other direction, but still – not an easy thing to be at a top school in the wrong coat.

I know that school uniforms are going to be a popular topic here because after a recent mention of the Chalet School on the blog (talking about a John Banville book, as anyone might guess) I got into a blissful Twitter discussion of many aspects of the Chalet School, but hugely about the uniform – as many of us fans agreed, we couldn’t remember what happened last week or what we went upstairs for, but we could tell you the details of life at the Chalet School and the different colours of the different versions of the school outfit. 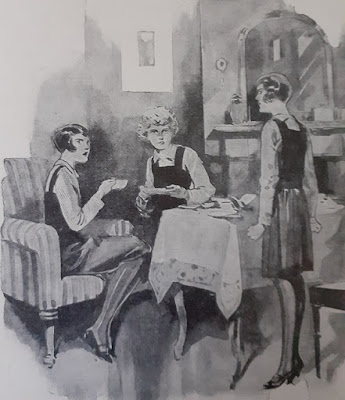 Showdown in the study: the wrong shirt?

My friend Deborah Machin was one of my earliest blog supporters – I always say that she used to send me encouraging messages & suggestions when I didn’t know if anyone was reading the blog at all. Last year she recommended a marvellous book called Mollie’s Choice by Helen Barber. It’s a school story written now, but set in the 1920s, and I absolutely loved it: Deb was (as she always is) right. It is set in a very recognizable Durham in the North East of England: a place both Deb and I know well – I was at university there. The school that Mollie attends is also very recognizable, apparently, very much an actual school there – though it is entirely fictional, and Helen Barber (who also writes Chalet School continuation books…) is writing now. It is not a posh or exclusive boarding-school: Mollie gets a scholarship there from an ‘ordinary’ home: she has to lodge with a family in term-time. The book is full of details of life, it is a truly wholly imagined world. It is very much in the mode of traditional boarding school stories, though you would never mistake it for a book from 50 years ago. I have tried and tried to work out why I think that, and who exactly it is aimed at, and I’m not sure. But it is a marvellous book, highly enjoyable and very unusual.

And there is a hilarious scene where Mollie can’t find her school beret, and – ever attentive to the rules – can’t imagine how she is going to get home without wearing it. She is caught between two rules: must wear a hat, and must have left the school on time. (She is convinced she will be locked in overnight, starving.) It is a true uniform panic, and beautifully done. Spoiler: she ends up walking home under an umbrella even though it is  not raining.

Helen Barber writes a fascinating afterword to the book, about the school – which she attended many years after Mollie – and how she came to write it. I think I must now read some of her Chalet School books. And any fan of traditional school stories would enjoy Mollie’s Choice.

While book-shopping in the Charing Cross Rd last year with fellow GA fans on the way to the Bodies in the Library conference, I found a book by star crime writer Michael Gilbert – but not a murder story. It’s called Prep School, and is an anthology of real-life recollections from boys who went to these schools in the first two-thirds of the 20th century. There is a whole chapter on clothes, in which various famous men, the great and the good, remember in excruciating detail how their ‘darling mother’ sent them to school with no shirts, or only short trousers (the darling mother here was blog love-hate object Vita Sackville-West), or dressed as Little Lord Fauntleroy, or wearing a girl’s sailor blouse. The victims all claim it was character-forming. ‘I was blamed and given a bad mark… so later I handed a ‘bad mark’ [to a fellow-pupil], somewhere in the region of his right eye.’ But actually it just makes for very hard reading. For me the whole book just makes you even less able to understand why the upper classes thought it was a good idea to send their offspring to these places. Gilbert himself wrote The Night of the Twelfth a heart-stopping and engrossing thriller set in a boys’ school, one of my favourites of his books.

And finally, on a personal note…

A good few years ago, at exactly this time of year, my family arrived back in England from the USA, in time for the children to start their new school. Because of a mixup, the school uniform hadn’t arrived in time, and I thought my two children would have to go to their new school in their ‘own clothes’, which the school of course said was perfectly fine.

A good friend had promised to introduce me to her friends, whom I didn’t know at all. On the evening in question – and I can still see them – these strangers walked into the room carrying items of uniform: the mutual friend had told them of my problem and they had all sorted out stuff from their own children, apologizing to me ‘It’s a bit faded’ ‘it’s missing a button.’ You will not be surprised to know that all these years on they are all amongst my closest friends still. Thank you across the years – you saved the day.

Pictures from the 1920s schoolgirl annual in the top picture.