V for Victory by Lissa Evans


published 2020
(will be released at the end of August)

I actually don’t know why her publishers don’t have me writing publicity for Lissa Evans’ books: I am her biggest fan (others may dispute and claim the role).

A writer who is clear-sighted and forensic in her examination of the emotions, but has a good heart, is the combination I most like in an author. (Like Lissa Evans, as it might be.)

I read her and think. Yes, that’s what people are like, not how they are in other books.

Charming (though totally unsentimental) and heart-breaking, and laugh out loud funny.

And every word of those would apply to her new book.

And anyway, anyone who read her previous books, Crooked Heart, and Old Baggage, will only have to hear of the existence of this book to want to read it.

Crooked Heart told the story of Vee and her evacuee Noel in the days of WW2. There were hints about Noel’s backstory, and then Old Baggage went back in time to tell us the wonderful story of Mattie, the aging suffragette, and how she lived out the time between the granting of the vote to women, and the runup to WW2. The girls’ club! The Flea! The house on Hampstead Heath! Old Baggage was a world to live in, I described it as ‘unforgettable and fabulous’.

Now we go forward again, to the final dreary days of WW2, with Vee and Noel in the Hampstead house, getting by with some lodgers, and just wishing it was all over. Vee and Noel are two of the finest characters in modern fiction, and the relationship between them is so believable, so nuanced, so funny. They are a stand-up standout double act.

Of course life isn’t easy, and there is rationing, and bombs falling, and dreary aspects of life. It should be over-familiar from other books, but it isn’t – Lissa brings her own magic to it. I loved every second of it and read it in just about one sitting. (And then couldn’t stop myself from doing that thing that must be so infuriating to Lissa: I said ‘but you are going to write more about them? A followup? I want to know what happens to them...’ She was patient but negative I’m afraid... ) 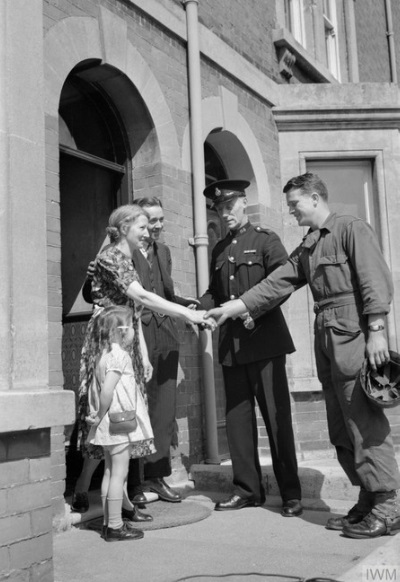 The subtlety with which she writes is marvellous – the unveiling of character is remarkable and seamless – two men in particular are introduced to us and then become more and more real, and we see their secrets and hidden aspects.

Lissa – whom I now know after meeting her online - is one of my favourite contemporary writers. And I am going to read all three books again, as a trilogy.

She is also a great source of recommendations for me and for the blog – her name has come up many times over the years. We both love books set on the home front of WW2, she for research and me for interest, and because I can ransack the Imperial War Museum's wonderful collection of photos of the era. I can get lost for hours in their photos. In the next few days I will be posting on yet another book she recommended about the homefront days…

Top pictures are from an entrancing series  called a day in the life of a wartime housewife: everyday life in London, England, 1941, in which a Vee-like cheery lady does a lot of dreary tasks with a smile on her face. And of course much earlier in the war. Vee would have said ‘how much will you pay me to take the photos?’ and ‘well do I HAVE to look happy?’ and ‘You’ll have to give me  more clothes coupons so I can get a new dress for them.’


Second picture shows a US Serviceman come to lodge with an English family in 1944.