The Fancy by Monica Dickens 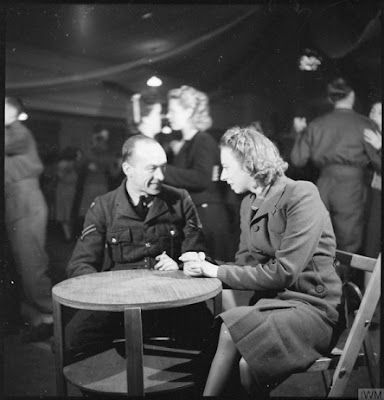 My friend Lissa Evans (her most recent book, V for Victory was just on the blog) recommended to me Monica Dickens’ The Fancy - her recommendations are always guaranteed winners, and this is  a most interesting slice-of-life book.  It centres on a London munitions factory, and follows the lives of a number of the women, and the man who supervises them – Edward has a work life, a not terribly satisfactory marriage, and a burning interest in breeding rabbits. Half of which must be used for meat to justify the feed; the rest may be shown for prizes –The Fancy of the title.

The young women have a variety of setups at home, none of them wonderful, but all too realistic.

The detail is amazing, and fascinating, and probably could only have been written by someone who was there – it is like a historical document. There are people living in tube stations, there are bombed out houses, shops where you queue for rations. Yes, familiar from many other books, but as with Lissa, Dickens brings a great touch to it.

She is very good on everyday life, including clothes:

The worst thing about getting up early was that you never knew what to wear. Clothes that seemed suitable at six in the morning were all wrong by six at night. She put on a jersey and a pair of linen dungarees. They were old, but they had faded to a blue that was attractive with her red jacket.

Sheila falls in love with a most unsatisfactory man, David, and you long to shake her and tell her not to put up with him. But again the detail is wholly believable, and we’ve all known a couple like them. The scene where she has to get him out of their flat because her mother is arriving unexpectedly is hilarious and echoes down the years.

There is poor Wendy, who lives with her mother and father. Dad is a complete domestic tyrant who makes their lives a misery, but even there Dickens shows how this is fallout from the previous war. This is the 1940s: there is no diagnosis of PTSD, no therapy or help, not even acceptance that this is what the problem is. 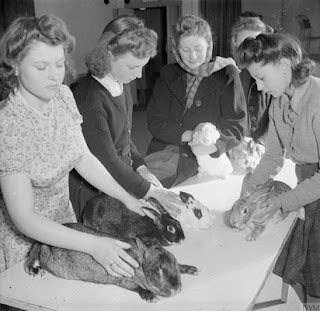 Occasionally there was too much detail of the lives of rabbits, and descriptions of rabbit shows. But as a picture of life The Fancy was incredibly real and made you live in the world. And I love a book that makes it clear that people’s lives were changing, and relationships could be casual and short-lived, people slept together (without the clichés about ‘making the most before the bombs fall’) and lived in sin, a marriage could just peter out and another arrangement might happen... Everyone wanted to win the war, and knew that 'we' were the right side, but it wasn't the only thing in their lives. 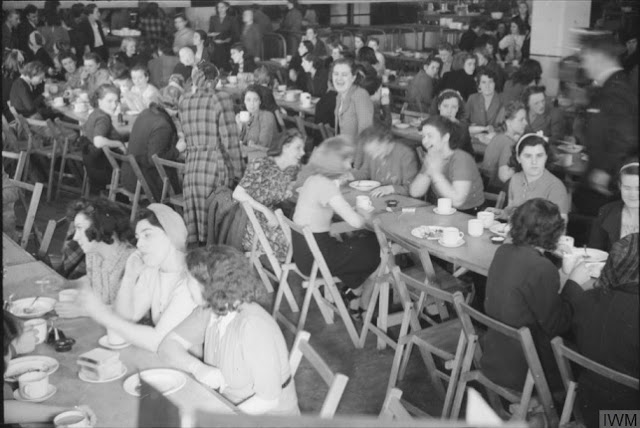 This picture is a canteen for factory workers from the Imperial War Museum collection. What do you think the people in the book thought about the canteen food? Other than the war reference, this passage resonates down the years for every single communal eating situation ever, certainly in the UK, from schools to the armed forces to prisons to factories, including the person who is too embarrassed to say they like the food:

“What I want to know is, are the Shop Stewards aware that the food in the canteen is disgusting, inadequate and not fit for ’uman consumption and that the price charged for it may be called, in plain words, profiteering?” Murmurs broke out. This was interesting. Some of the murmurs were approving and Wendy wondered whether perhaps she was wrong in thinking the canteen lunches good.

My favourite line in the book was (SPOILER) before we find
out that David is an awful person. He and Sheila are regularly on the same tube train, and when they finally get talking, he ends by saying see you next Tuesday then adds ‘And I say—wear that red jacket.’

That summed up life when you are young and full of possibility, when you have a great red jacket, when you might meet a young man, when you are not thinking about the war, you are thinking about romance, and the sun is shining and you walk down London streets in all their grey dusty beauty with a life ahead of you...

(Mind you, just to lower the tone, I also loved Edward’s ‘insane desire to dash to the ground the vegetable dish with the two compartments that held too much for one person and not enough for two’.)

There are several other books by Monica Dickens on the blog.

Top picture is also from the Imperial War Museum - chatting at a dance.

The rabbits in the picture were owned by a girls' club in Northamptonshire, although in the book the rabbit-breeding was very male-dominated. (The corresponding boys' club is pictured playing chess and doing PE.) From the IWM again, of course.


Factory girl in a red jacket from the Library of Congress.