Sing For Your Supper by Pamela Frankau 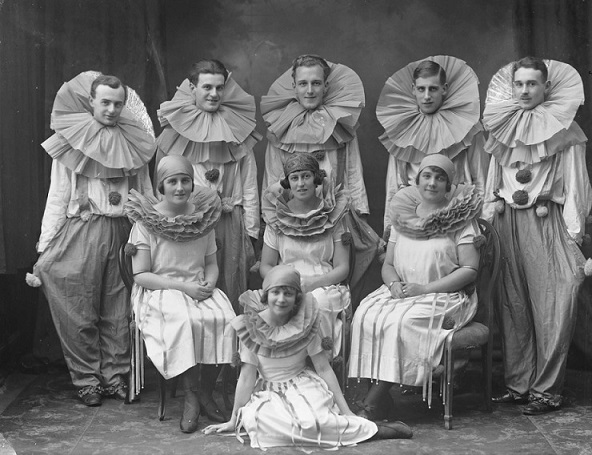 [Excerpt from the book, which is set in 1926. A seaside entertainment show]

Behind the pink plushy curtains, Tubby Whittington and Susie had begun to play Here We Are on their two pianos.

The front lights went out: the curtains parted.Tubby and Susie were playing with their backs to each other as usual, but newly dressed from head to foot in silver satin, with pale blue ruffles and pom-poms, pale blue skull-caps. The midnight blue backcloth carried silver cut-outs of moons and stars.
Everybody on.

comments: Usually on this blog the book, and a description of clothes, comes first. Very occasionally I find a photo that I love so much that I actively look for some reason to feature it. (And I do have a Pinterest board called Looking for the Right Book, which shows off some absolute crackers. Their day will come, I WILL find the right books.)

This post is somewhere in between: I read Sing for Your Supper and might have chosen not to blog on it, but I knew I had this wonderful picture up my sleeve. It’s an Irish entertainment troupe from 1924 from the National Library of Ireland – I previously used it  for Angela Carter’s Wise Children, and said then: ‘don’t you just have to stare at it’. I never get tired of looking at it.

The book is about a theatrical family: it starts with the children Gerald, Sarah and Thomas coming from their separate schools to meet up with their old Nanny: then they all head down to Devon to join their (widowed) father whose concert party has a season at a seaside resort. It is clear there is something up, as they are travelling First Class, and will be staying in a nice house. Usually there is no money… Has their father found a new rich backer?

So we get the story of the family through the summer, with all kinds of revelations and excitements. I liked it enough to carry on reading, but it seemed too much assembled from the elements of other books – very much a cross between Daphne du Maurier and Noel Streatfeild (see labels below for links to endless other posts), but without the magic of either. It read rather as if she was writing for what we would now call Young Adults, then every so often remembered it was a grown-up book, and put in something a bit racy (by the standards of 1963, not either 1926 or 2020). There was far too much of people’s dreams and important thoughts – multiple characters to follow should keep the action brisk.

There was also the usual class consciousness and snobbery, and some anti-Semitism which would have been dreadful if the book had been written in 1926, but was unforgiveable for 1963. And again, Frankau kept putting in details to show she had done her research: a dress was ‘much too short, like all this year’s dresses’. Someone wants to change the subject so ponders possible topics: ‘the coal-strike: the Prince of Wales: Sir Alan Cobham: Suzanne Lenglen turning professional.’

Seriously? Looked at the newspapers for that week did we? I thought this over-research, and ridiculous subsequent sentences, was typical of more modern books, so there’s a bit of historical detail for me and my historical novel about someone writing a historical novel. It seemed amateurish in the extreme, although Frankau was  a very experienced and successful novelist by this time.

But - I find it hard to resist any book about theatrical families, I just love the idea of them, if not always the execution. And this one was readable, and I wanted to know what was going to happen – Frankau set up good situations. And there were some funny moments and recognizable views: Blanche, the rather prim nanny, excuses a divorce with this: ‘It was her private conviction and consolation that though English marriages were made in Heaven, American marriages were made in America and didn’t, therefore, count.’

This book is the first of a trilogy. I would quite like to know where all the characters will end up, but probably not enough to actually read the books.

I have read several of her other books – The Willow Cabin (apparently her most successful novel) is absolutely marvellous. It is also well worth looking up her varied and intriguing life on Wikipedia.