It was an unusually warm spring day. She removed the jacket she was wearing over a sleeveless dress and felt the sun on her arms and face. It was a new dress, her best dress, navy blue with white polka dots. 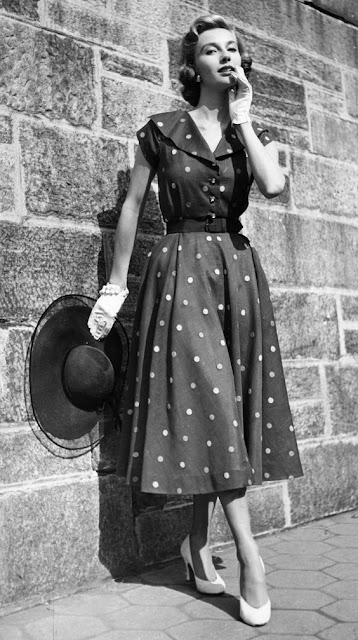 There were two dress shops in the town and Coral went to the better one, proclaimed so even by its name, Dalrymple’s Better Dresses…

[Mrs Henderson the dress shop owner] ‘I’ve got a lavender silk that would look beautiful on you. Take off your coat and hat and let me get a good look at you.’

Coral removed her hat and coat.

‘Just throw them on the pouf my dear,’ the woman said.

‘The pouf! The tuffet!’ the woman pointed to this so-called piece of furniture and watched as Coral lay her shabby coat and tired hat upon its elegant tufted surface. 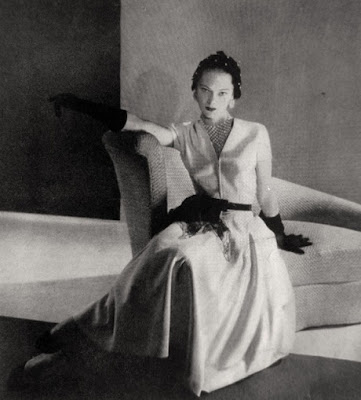 ‘All right, now turn around. All the way round. Lovely. You have a very nice figure – a bit of a tummy but a girdle will take care of that. And your chestnut hair is just right for the lavender. It will bring out the sheen. Add an egg to your shampoo for sheen. It comes in fawn, too, but I think the lavender is better for you.’

comments: The extracts and dresses above are in the wrong order – the navy dress comes late on in the book, lavender silk is near the beginning. I have reversed them because I wanted to show off that splendid top photo, which is from Harper’s Bazaar: it is particularly treasured by me, because pictures of polka-dot-patterned dresses are very hard to find. As soon as I read of this one in the book, I groaned because I wanted to feature it, but knew it would be difficult. This has been my observation in all the years of the blog: such dresses are very popular and commonplace in real life, but in vintage photos very rare. If you do find such a dress, it will usually be white with dark spots, rarely the other way round. I have idly wondered if spots are difficult to photograph? But I don’t know: it’s a mystery.

I first discovered this fact looking for an illo for this blogpost: I 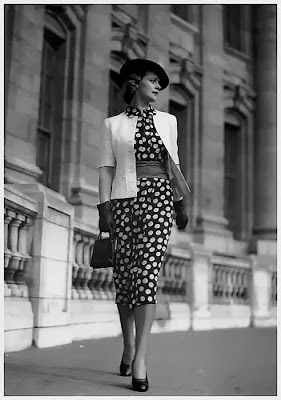 found one on Kristine’s photostream, and it’s gorgeous, but it is from the 1930s so is out of time for both that book and for the one under discussion now. (last time I just gave up the struggle)

There is this one, from Clover’s The Vintage Tumblr, used for a Peter Dickinson book set in an alternate history so era didn’t matter. It is from 1949, so should’ve been ideal, except that you could never in a million years imagine the Coral Glynn of this book disporting herself like this. 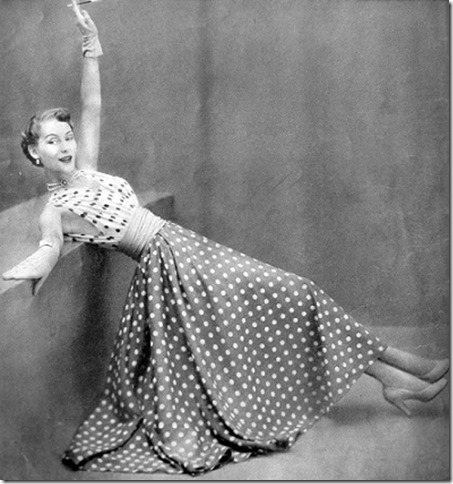 She is a most unusual heroine, and perhaps protagonist is a better word. The reader does end up rooting for her, but she is a strange and not particularly appealing woman. It is 1950: she is a private nurse who goes to work in a big country house, looking after a dying woman. The surroundings are not sympathetic, the weather is awful, times are hard. When her patient dies, she drearily contemplates her future, how she will have to find a new job – she has no friends or family. But then a different possibility opens up for her…

SLIGHT SPOILER, THOUGH USED IN THE PUBLICITY FOR THE BOOK, AND COMES EARLY ON

The son of the dead woman, an Army Major wounded in WW2, asks her to marry him, and she accepts. He is apparently offering a platonic marriage for their mutual benefit. The lavender silk dress above is to be her wedding dress – she initially asks for black because of the recent death of his mother, but the shocked dress shop owner convinces her that that is not necessary.

Strange random events impinge on the plans, and we find out more and more about Coral’s past life, some of it quite murky. How exactly are things going to go wrong?

There is a grim, nervy atmosphere to the novel, and the reader is never sure where it is going next. But it is also very funny at times, and full of great descriptions and memorable characters and phrases.

One character has a room which looks like the bedroom of a dead boy, ‘left untouched in memory’.

The Major says of his soon-to-be-dead mother: ‘I don’t think she ever met a person she liked. Including my father of course. What a wretched woman. It’s all I can do to stop myself rushing upstairs and holding a pillow against her face.’

As she was dressed in her nurse’s uniform, there could be little doubt as to her occupation, unless she had become theatrically inclined, but she let this idiocy of his pass.


The description of the wedding is hilarious, with a disastrous celebratory meal, a random difficult mother determined to sing a song, glasses too full to drink from, and a visit from the police. There are some wonderful conversations, funny and affecting and realistic all at the same time. And (it’s the law with books set in 1950) endless class differences and snobberies and shibboleths to catch Coral out, like the ‘pouf’ above. She is sometimes too blank a person, and it was difficult to know what to make of her – but this reader certainly wanted to know what would happen to her.

The book felt like a weird mashup of Barbara Pym and Sarah Waters, as if they had contributed alternate chapters.

I came across Coral Glynn on Simon Thomas’s Stuck in a Book blog (though it has taken me two years to catch up with him), and his review is highly recommended. I was inspired to track down a copy a) because I always like books that have the name of the female protagonist – there is something mysterious and inviting about them, but b) because I absolutely loved another book by Peter Cameron, the 2002 The City of Your Final Destination, which I read 15 years ago, long pre-blog. It is set in Uruguay in the household of a famous writer, and couldn’t be more different. I did like this one, though not as much, and Cameron is a marvellous writer: I would like to read something else by him.

I don’t think Coral Glynn was ever published in the UK, surprisingly given that it is set here.

Spot dress from Harper’s Bazaar fashion photos of the 1950s.