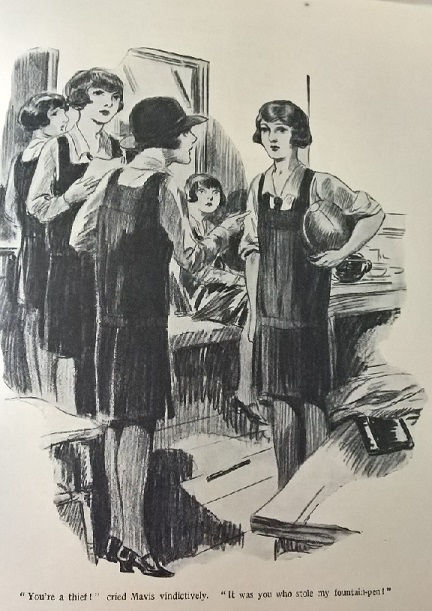 Look at the picture above and read the caption.


“You’re a thief!” cried Mavis vindictively. “It was who you stole my fountain pen!”

If your heart thrills to this evidence of major crime, raised voices and passionate accusations, the school hat worn indoors, the prospect of pupils being sent to coventry, and serious detection to come – then this post is for you. (If your heart doesn’t thrill, then perhaps you don’t have one.)

Earlier this year I did a blogpost on schoolgirl detectives in books and comics. I said then that this was the post I was born to write, and it a) resonated with many other fans of both school and detective stories and b) has led to even more excitements. 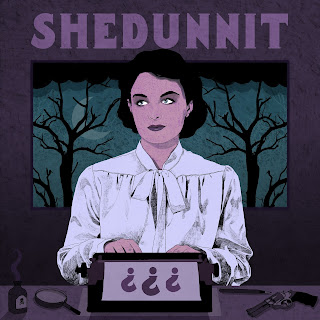 Caroline Crampton’s podcast Shedunnit is already a must-listen for any fan of Golden Age detective fiction, and this week her episode is about, yes, schoolgirl detectives and other books set in academic institutions. She says herself, it was the episode she has been dying to make. And she asked me to be a guest, and there I am giving my important views on this vital topic. Also featured is Robin Stevens, who is the author of the Murder Most Unladylike book series. And every possible book in the genre (and some you wouldn’t have thought of) is featured.

Caroline’s Shedunnit website is here with links and instructions to reach the podcast, or else look for it where you normally listen to podcasts. It really is a great episode, and that is a completely objective view. Full of fascinating questions and considerations of what makes crime at school such a good topic. And, as in the top picture,  a fountain pen crime features in depth.

Incidentally – if Caroline ever asks you to be a guest on Shedunnit (and for many of my readers this would be quite possible) do accept: she has superb editing and interviewing skills and does her very best to make her guests sound intelligent and interesting (ahem). This is the second time I have featured – first time was the Queer Clues episode – and it was a most enjoyable experience. 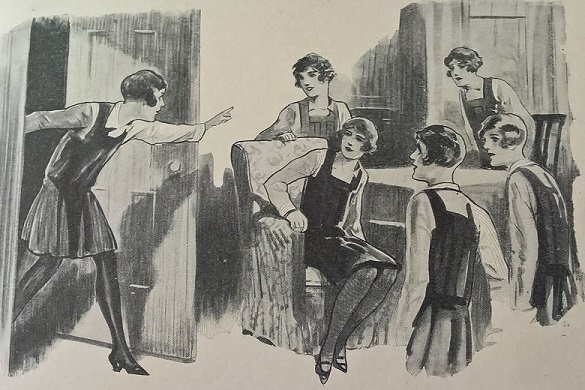 
So by happy chance, one of my favourite modern crime writers has now moved into this area too. Elly Griffiths is revered round here for her Dr Ruth Galloway mysteries, much featured on the blog, but we love all her books. This one is aimed at Young Adults and is

and has just been published, and I do hope is the first of a series. It is firmly set in 1936, and the first line is ‘As soon as she saw the school, Justice Jones knew that it had potential for murder.’

Justice has all the usual problems settling into her new school: the dormy captain is mean to her, the food is terrible (the shepherd’s pie ‘tasted as if it were made of actual shepherds’) - and one of the maids may have been murdered. There is plenty going on, and I enjoyed it immensely. This is an early paragraph:


Eva was a small, sandy-haired girl. She was dressed in a brown blazer with gold trim. Under this she had a brown skirt, yellow-and-white striped shirt and long brown socks. But Justice did not think that she was actually insane; this was the school uniform. Justice had hers in her bag but she hadn’t dared try it on yet.

And there is surely a reference back to the revered Agatha Christie’s Cat Among the Pigeons in the choice of one of the victims – let’s just say that certain roles in a school are more dangerous than others.

I kept wondering if one of the pupils is going to turn out to be Ruth Galloway's mother.

Tremendous fun and recommended to anyone who enjoys schoolgirl detective stories.

Pictures from a schoolgirl annual of 1931, despite what appears to be an ipad on the bench in the top one.