Twelve Girls in the Garden by Shane Martin

[Professor Challis is looking round the garden of the title, with a young woman called Polly]

She was a slim and singularly attractive girl, wearing a red handkerchief knotted at the neck of a black fisherman’s-knit jersey, and blue jeans rolled up a turn or two above soft moccasins. Her black hair was cropped short. In the deliberately smart casualness of her clothing as much as in her air of assurance and of a half-suppressed quality of vitality and intelligence there was something one associated with those new forms of young life which moved around art classes and schools of drama and youth hostels on the Continent. 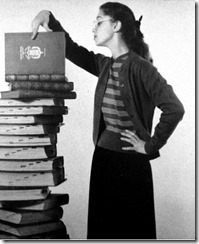 The blue jeans, he was glad to see, had been dispensed with. A French shirt of thin horizontal stripes worn beneath a severe charcoal-grey suit was her only concession now to the world where colours were bright, Bechet was as big a word as Bach, everyone read Strindberg, and nobody had ever heard of Professor Ronald Challis.

commentary: Now this was an unexpected fascinator (in the sense of enjoyable book, rather than the usual blog meaning of disputed headwear). Barb over at Leaves and Pages recommended it: both author and book were completely new to me, and I think it really is an obscure title.

The story has a distinguished academic wandering round London to begin with, and latching onto the story of a lost sculptor, funny business in the art world, agents and young women and, yes, 12 quasi-classical statues of women in a city garden in Chelsea. Our Professor Challis, an archaeologist, then travels on the Orient Express (always a great addition to any crime story) and has various encounters. He reaches Athens, where all the main characters are gathering, wandering around, disappearing and re-appearing. There is (of course) a lonely villa where people turn up unexpectedly, there is a taxi driver who seems to be ‘taking the long way round’, there are dramatic arguments and fights, and trips to ever more lonely islands and farmhouses.

It was a good plot, and interesting: it bore resemblances to the Delano Ames books and to Emma Lathen’s When in Greece – I love the way The American School in Athens always pops up in such books, rather as the American Express Office plays a key role when transatlantic visitors hit Paris in the same era.

Challis is rather patronizing about the young people, but I still liked his descriptions of their clothes and parties:

The women appeared to be dressed-up rather than dressed: the dernier cri seemed to be very large gypsy ear-rings and very tight, masculine-looking trousers. Several of the men, perhaps in response to this challenge, had beards. It was ironic that English anthropologists spent so much time travelling to the islands of Melanesia when this fertile field of tribal research lay at their very doorsteps. 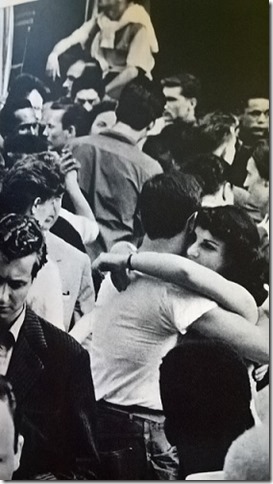 And I loved a diplomat’s worries about a hospital on the island of Kos:


It’s perfectly sanitary I suppose, but it’s rather page 64 of the Golden Bough and three spits for the evil eye. Hardly Helen Sorelle’s dish of tea, I should have thought.

The charming, if very judgemental, academics and the Bohemian artists also brought to mind one of my all-time favourite crime books: Thus Was Adonis Murdered by Sarah Caudwell.

I loved the settings, particularly London in the late 1950s, and the cheeriness and jokes: the author had a very lively style, he seemed an excellent, very confident, writer. So then here’s Leaves and Pages, who felt much as I did about the book, doing some investigation:


Turns out that Shane Martin is the pseudonym of Australian journalist-writer George H. Johnston, whose fictionalized autobiography My Brother Jack is something of a classic of Australian literature. Moving to the Greek island of Hydra in the 1950s with his wife, the equally talented writer Charmaine Clift, and their four young children, Johnston took to writing “pot boilers” in between his more serious literary attempts, five such light novels under the name Shane Martin, of which Twelve Girls in the Garden is apparently the easiest to find – the rest having dropped out of sight, being virtually invisible on all of the usual used book sites.

This is very disappointing, as Barb says, because I would love to read more of him. And then, she linked to this absolutely fascinating webpage, telling more about Johnston and Clift, and their connection with, unexpectedly, the singer-songwriter Leonard Cohen.

It’s a shame this writer isn’t better known: I would love to see him and his books revived and re-issued. This one is fairly easy to find, and I do recommend it.

The woman in the suit is from Vogue via the Clover Vintage tumbler, the other pictures from my collection.