Our theme for October is:

-with a subhead of Masks and Masquerade. So this is 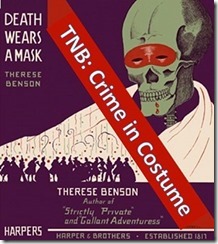 partially inspired by, but not by any means confined to, Halloween and is NOT meant to pre-empt any possible separate topic of theatrical mysteries. (The negotiations on details of topic among the Tuesday-Night-ers would put the UN to shame. And don’t start us on fascinators.)


Thanks to Bev for the usual great logo, and to Kate for yet again volunteering to collect the links – see them over at her Cross-Examining Crime blog.


I was vaguely wondering what I might do in this category, when my first subject came fully-formed: If there is one thing I love in a book, any book, it is a fancy dress party. So:

WHY IS THE FANCY DRESS BALL SO IMPORTANT IN PROPER CRIME FICTION?
I will start with The Case of the Four Friends by JC Masterman – he was Provost of Worcester (which I always think sounds like a prize-winning dog or horse) and this is a real Oxford Don’s Delight from 1956 – slightly out of era for GA, but very much in the right mode.

The key action of the book takes place at and after the New Year’s Eve ball, and the author has a character explain why the aftermath of the drunken celebration is the ideal setting for any number of crimes, up to and including a murder: 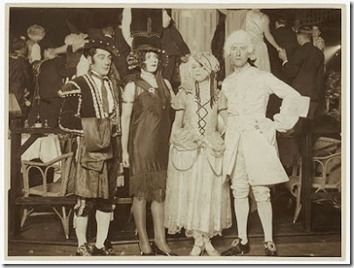 Is that shape in the corner of the Moroccan bar a Barbary pirate of is it Henry VIII? Is that not an inebriated Charles II trying door after door? And what is that – that dim shadow that seemed to flit down the corridor? Was it only a figment of the imagination or was it Harlequin… searching for the room of Columbine, or Mary Queen of Scots? Yes, if you have ever been the last survivor of a fancy dress ball you will have some conception of the meaning of the word chaos.

There’s a party it would be fun to attend. And reading that makes you think there should be more crime stories set at fancy dress parties.

Next choice is The Idol House of Astarte, one of Agatha Christie’s Miss Marple stories, first published in 1932.

Diana Ashley’s suggestion of a fancy-dress party that evening was received with general favour. The usual laughing and whispering and frenzied secret sewing took place, and when we all made our appearance for dinner there were the usual outcries of merriment… Richard Haydon called himself a Phoenician sailor, and his cousin was a brigand chief…. 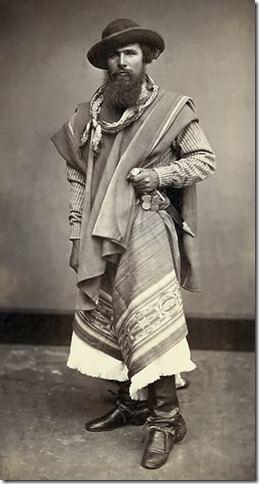 There is a crime. Miss Marple says ‘one looks at the facts and disregards all that atmosphere of heathen goddesses which I don’t think is very nice.’ As I said back in a blogpost, I think the last 7 words were put in by Christie just because they are funny: Marple isn’t taken in by these things, but she is far from prim and prissy, and is totally unshockable. The fancy dress theme is well done, a clue tucked in there along with the vision of the Neolithic hut dwellers ‘explaining the sudden lack of hearth-rugs.’ 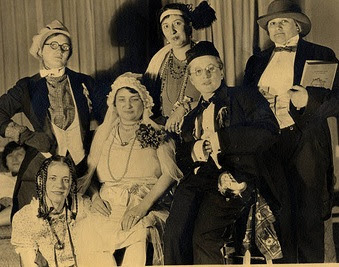 
‘Why are masks de rigueur, Marguerite?’ he inquired.
‘You mean we ought just to have had dominoes with them? I know, but I specially wanted a fancy-dress ball, and masks are such fun that I thought we might have them too.’
‘Your brother doesn’t wear one, I notice,’ remarked the sheikh, nodding to where Fountain, an imposing Cardinal Wolsey, stood talking to Mme de Pompadour.
‘No, because he’s the host. Shall I find you a partner, Mephistopheles?’
Amberley was watching a girl at the other side of the ballroom. ‘Will you introduce me to the contadina?’ he asked.

I said back then:
The first couple of lines of this extract could almost come from one of Ms Heyer’s regency romances, where much is made of dominoes (experienced readers know these are cloaks) and masks…On first reading, Clothes in Books (so snobbish!) vaguely assumed that a contadina was some kind of Italian contessa, but it is revealed later that it means peasant-girl, countrywoman.

The fancy-dress party is rather wasted, in this book – the biggest crime regarding the event is gate-crashing, a terrible etiquette howler. 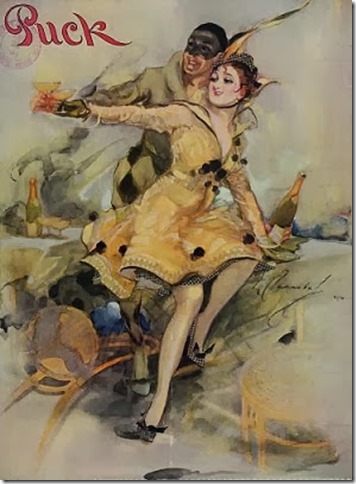 One of the best uses of costume, character and crime comes in a GK Chesterton Fr Brown story – the Flying Stars, from The Innocence of Fr Brown. The young people at a Xmas house party are getting ready to create an entertainment:


As always happens, the invention grew wilder and wilder through the very tameness of the bourgeois conventions from which it had to create. The columbine looked charming in an outstanding skirt that strangely resembled the large lamp-shade in the drawing-room. The clown and pantaloon made themselves white with flour from the cook, and red with rouge from some other domestic, who remained (like all true Christian benefactors) anonymous. The harlequin, already clad in silver paper out of cigar boxes, was, with difficulty, prevented from smashing the old Victorian lustre chandeliers, that he might cover himself with resplendent crystals.

- and the amateur theatricals are used to great effect in the commission of a crime.  This particular story has a charming and touching ending.

This post is quite long enough, even though I can think of several more examples. And I’m hoping readers will add instances of murderous fancy dress parties in the comments…