Posted by Clothes In Books on October 17, 2016
Clothes in Books is back from its holidays! I have been in Italy, and by happy chance have read a book partly set in Florence…

started appearing as a magazine serial in 1871, published as a book later 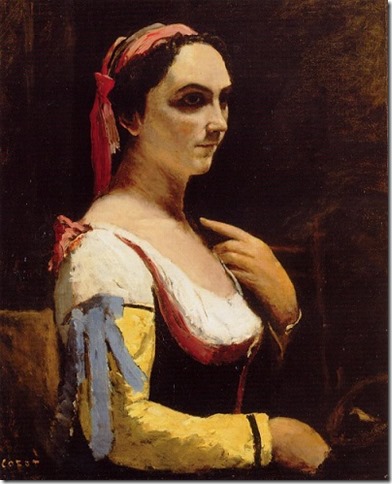 [Ronald and Dora have moved to Florence after their unfortunate marriage, and have no money]

Among those who eagerly sought Ronald's society was the pretty coquette, the Countess Rosali, an English lady who had married the Count Rosali, a Florentine noble of great wealth. No-one in Florence was half so popular as the fair countess. Among the dark, glowing beauties of sunny Italy she was like a bright sunbeam… She loved bright colors, and everything else that was gay and brilliant.

The countess did not rest until Ronald had been introduced to her, and then she would know his wife.

No day passed without some amusement at [her] villa--picnic, excursion, soiree, dance, or, what its fair mistress preferred, private theatricals and charades.

"Help me," she said one morning, as Ronald and Dora, in compliance with her urgent invitation, came to spend the day at the villa--"help me; I want to do something that will surprise everyone. There are some great English people coming to Florence--one of your heiresses, who is at the same time a beauty. We must have some grand charades or tableaus. What would you advise? Think of something original that will take Florence by surprise." 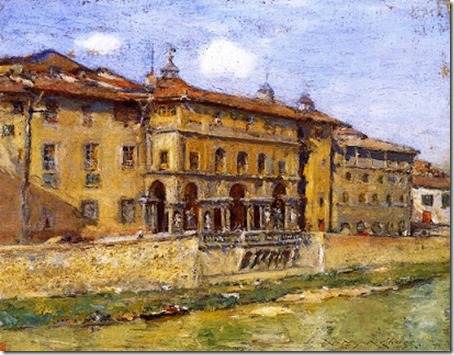 “He doesn’t amount to much,” said Ames… “His stuff is nearly as bad as ‘Dora Thorne’.”
Carrie felt this as a personal reproof. She read Dora Thorne, or had a great deal in the past. It seemed only fair to her, but she supposed that people thought it very fine. Now this clear-eyed, fine-headed youth, who looked something like a student to her, made fun of it. It was poor to him, not worth reading. She looked down, and for the first time felt the pain of not understanding.

I went to look up Dora Thorne, partly to understand the odd phrasing of the reference. So – it was the name of this author’s most famous book, and became so famous that later books by Charlotte M Brame (particularly in the USA) were actually described as being by Dora Thorne. Confusingly, the author also published under the name Bertha Clay (a sort of short anagram of Charlotte Mary Brame). ‘Dora Thorne’ seemed, as above, to become shorthand for a certain kind of book – and indeed one that could not be more different from Dreiser’s work.

Dora is almost a minor character in the book, strangely – she is important, but doesn’t appear much, and never seems to have much of a character. She is the daughter of the lodge-keeper at the great estate of Earlescourt: the current Lord’s only son, Ronald, falls in love with her and marries her. Her childhood sweetheart is very put out:


"I have a little account to settle with you, my young lordling," said Ralph, angrily. "Doves never mate with eagles; if you want to marry, choose one of your own class, and leave Dora Thorne to me."


And Ronald’s father is so angry that he disowns him – says he will never see him again. I thought the whole book was going to be about this romance, but all this is dispatched very quickly – this is most definitely a story that keeps the pace up.

The young couple head off to Florence (perhaps I was the important and beautiful heiress who was about to turn up? I will leave it to you to decide if this was the case). Slowly their marriage falls apart – she is, as his father said, ignorant and apparently unteachable, and also becomes very jealous of his friendship with a beautiful woman of his own class (how unreasonable of her). By the time they have twin daughters, Ronald is ready to fling her off:


“I never wish to look upon her face again. I see nothing but dishonor there. My love died a violent death ten minutes since. The woman so dead to all delicacy, all honor as to listen and suspect will never more be wife of mine.”

There is plenty more incident and plot to go – I’m going to have to save it for another blog entry. This despite the fact that the writing style is pretty dire (did you guess from these extracts?) and the morals and judgements in the book are doubtful. I thought the story might be aimed at working young women who hoped to marry a Duke one day, and that Dora would be an object lesson in goodness and worth in the lower classes – but far from it. There’s no particular favour shown to poor Dora, rather she is dismissed for climbing out of her station.

What will become of them all? You can wait for my next entry on the book, or you can find out for yourself: the book is available free online, for example here at Project Gutenberg.

The lady above – with ‘the grandeur of an Italian Renaissance noblewoman’ - is Italian Woman with Yellow Sleeve by Jean-Baptiste-Camille Corot – painted around 1870, the date of the book, and found at the Athenaeum website.

The view of Florence is by William Merritt Chase from the same source.