Today Will Be Different by Maria Semple 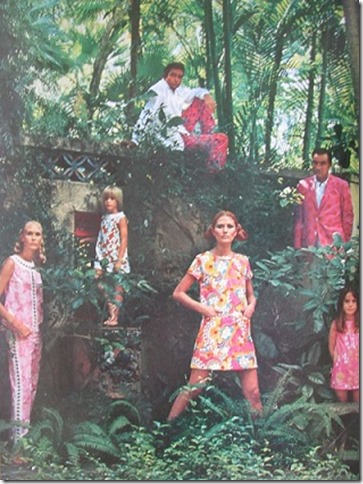 The mansion door swung open courtesy of a courtly black man in tails with white hair and white gloves. He was Mister, the husband of Taffy. Both uniformed servants to two generations of Fannings, and hopefully a third, now that Bucky had returned from New York with, of all things, a bride. 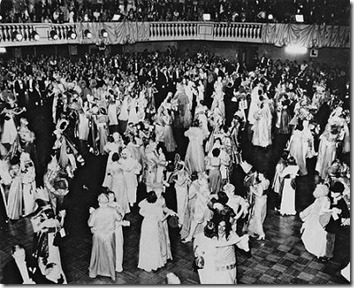 Eleanor and Joe entered. The living room was aswish with ballgowns and tails. Just as an “Oh”” was about to escape Eleanor’s mouth –

she’d worn flats and a knee-length dress she had no time to iron – a mint julep was thrust into her palm. The shock of the frosty silver tumbler slapped Eleanor’s face into a smile.


“Eleanor! Joe!” It was Ivy wearing a pleated 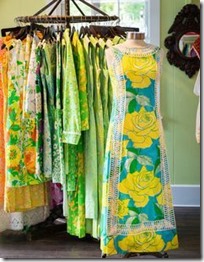 chiffon gown, lime with orange flowers and sleeves that hung like calla lilies. She gave it a twirl. “1972 Lilly Pulitzer! It belonged to Bucky’s mother. Did you know that if you admire something, the person has to give it to you? That’s the Southern way.”


commentary: Many of my UK readers may not know what a Lilly Pulitzer dress is, so it is my pleasure to introduce the brand to them. When a fashion magazine described a style as ‘Lilly Pulitzer on acid’, a friend (in America) said ‘how could you tell?’ so I looked up the whole business and saw what she meant. LP is famed for her wild, brightly-coloured prints, striking and startling to the eye – particularly as they are very upmarket in the US, worn by women whom you might more expect to be in beige cashmere. Lilly had married into the Pulitzer family (yes that one), and was making money by selling oranges and juice at a roadside stand in the family orange groves in Florida. This was a messy business, so she designed a dress in a splashy print that wouldn’t show the stains, and her customers wanted to buy the dress too, and you can guess the rest.

None of this, no little bit, is a very UK way of carrying on, for a variety of reasons.) 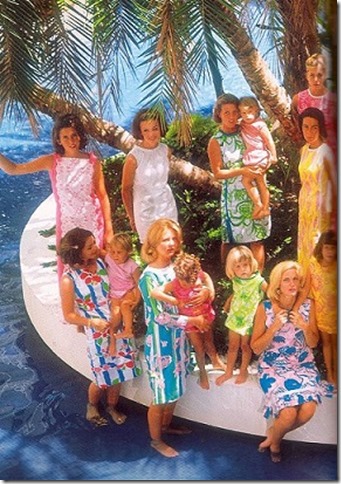 So that’s Lilly. Now to Maria Semple, an author I love to bits. Her Where d’you Go Bernadette was one of my favourite books of 2012, and I also enjoyed her This One is Mine. The new book, like Bernadette, is set in Seattle, and part of my enjoyment is recognizing so much about the place, from the simple geography and settings to the kind of people she describes. The schoolkids will go to Wild Waves, the pedestrians will not cross the road without a WALK sign, no matter how empty of cars the road is. And there’s this:


… the epidemic of haggard women in their 40s trapped in playgrounds, slumped on boingy lady bugs, unconsciously pouring Tupperware containers of Cheerios down their own throats, sporting maternity jeans two years after giving birth and pushing swings with skunk stripes down the center of their hair.

Was the sight of us so terrifying that the entire next generation of college-educated woman declared “Anything but that!” and forsook careers altogether to pop out children in their 20s? Looking at the [school] moms, the answer would be: apparently.
I hope it works out for them.

Eleanor is a classic Semple heroine – glorious, deeply sympathetic, but also annoying, quite wicked, and mad as a box of frogs. The book follows her through the one day of the title (with frequent and extended flashbacks) via various farcical events and childcare challenges. She meets a poet and an artist, she goes to her child’s school, she worries about her husband.

Her clever confident comments on life include this:


My friend Merrill told me that on the first date, a guy without realizing it will tell you why the relationship will ultimately fail. He’ll say he doesn’t want kids, or he’s not the type to settle down, or he’s in a fight with his mother.


Every person has it in them to be either the Competent Traveller or the Helpless Traveller.

There are great observations, and glimpses of darkness and sadness. Eleanor at one point explains her husband’s odd behaviour with a brilliant invented story – I so wanted it to be true. I laughed a lot, and read the whole thing in a couple of hours, which fits well with its all taking place on one day.

Tucked away in the book is the astonishing true fact that the tenth President of the USA, John Tyler, was born in 1790, was president in the 1840s, and has grandsons living today. (By means of having children into his 60s).