Children in Crime: The Worst School in the World?

this week with some schoolgirls & teachers in jeopardy…

We are the informal group of crime fiction fans and bloggers choosing a topic each month to discuss in posts on Tuesdays.

Our theme for September is:


Thanks to Bev, as ever, for the excellent logo. Kate at Cross-Examining Crime has kindly offered to collect the links for the various pieces.

The Week 1 links are here, along with Kate’s own piece.

If anyone wants to join in, just send a link to one of us or post it in the comments below.

Last week I looked at killer-child classic The Bad Seed by William March, with a very small child who is in the frame and should be in the dock. This week the children are schoolgirls at a highly unusual school in this Ethel Lina White book. She did groups of people really well – but they weren’t much like anyone else’s, and this is one very weird school…

[It’s the last day of term: Caroline is a PE teacher.]

“Well, I must give the wretched girls a last hockey practice."

It was a cold grey day with a bite of north-east wind which pinched faces and nipped fingers. When Caroline reached the field, she found the girls standing together in a forlorn huddle, grumbling about the weather.

"Do you good," declared Caroline. "Jean, you play centre-forward— Mary, goal——" She broke off at the sound of a noisy burst of coughing behind her. "Who's the crooner?" she asked.

"Me," replied a muffled voice. Caroline swung round and saw Flora Baumgarten—— the fat intelligent pupil. Her face was flushed and her eyes were streaming, as though she were in the grip of a heavy cold. "Idiot," stormed Caroline. "What possessed you to come out in this wind? You ought to be in bed."

[She sends Flora back into the school.] 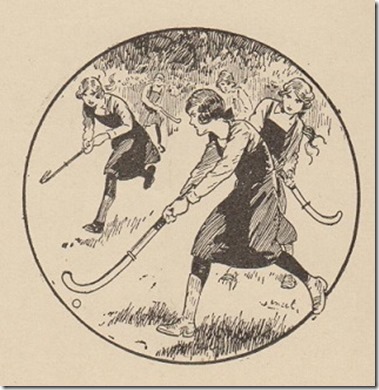 After Flora had gone, Caroline tried to forget the incident. She had stopped the game to give a demonstration of passing on the left wing, when she heard a laugh. "Flora's come back, Miss Watts," a girl told her. Caroline turned and gazed with horrified eyes at the over-developed form— ludicrous in shorts and sweater— stumbling slowly down the field.

commentary: Caroline is a classic White heroine – independent, decisive, unafraid, and about to get into real danger. The first half of the book takes place in a girls’ school, Abbey School, a posh fee-paying place which is having some problems. She is warned before she goes there, taking up a post at short notice:


"I know from personal experience that these places can he hotbeds of jealousy and scandal."

- and worse: the reason there is a vacancy is because a teacher died suddenly **.

It is not a rigorously academic school:


"Its main line is social. To quote from an advertisement, we train the girls 'to become beautiful ladies.' …Girls must have the proper preparation for the life they are to lead. Our pupils are society girls. Never a term without a title.”

- but the young ladies will be prepared for life in some unexpected ways. The Matron is a terrifying figure, a truly wonderful villain with some amazing clothes: ‘a tailored dinner-suit with a frilled white shirt’, ‘As she swaggered on to the field, wearing breeches and a polo jersey…’, ‘An ancient bath-robe of orange towelling was open to display creased purple pyjamas.. her hair was set with metal clips and she wore a rubber chin- strap with perfect unconcern’. 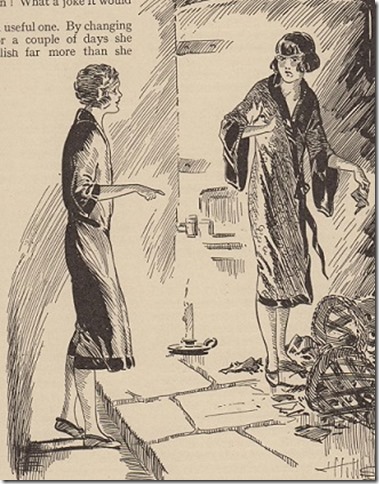 Matron has drinks parties to which she invites the senior girls – those with titles anyway – and she shows them life in other ways:

"I know I've been criticised for taking girls into a cocktail bar at Plume. But it would be a fine advertisement for the school if they got tight at their first party."

Exactly what we all want from our daughters’ education.

And, as it turns out, the hideous Matron can also turn her hand to being a medium when a séance is called for – and this is one way she keeps the headmistress under her thumb.

When someone dies, Caroline has evidence that the Matron is to blame – though through laziness and negligence rather than something more sinister: too much time spent ‘stretched on the divan, smoking’. As Caroline travels back to school by coach after the Christmas break, someone is going to try to get hold of the vital piece of evidence from her luggage. The story changes gear dramatically, and turns into the regular White trope of a young woman amongst a gang of passengers – who can she trust? Who is the villain? We have a little more info than Caroline, but White handles her groups well, and we don’t quite know when the danger level has been turned up, or is receding – as ever, it is cleverly done.

By now the school and the schoolgirls have little to do with it – this is very much a book of two halves. Both are excellent in their own way, though the transition is slightly awkward. But the school itself is quite splendid – completely outrageous, verging on St Trinian’s territory, and tremendous fun.

Abbey School is truly the worst school in the world.

Flora is the only one of the schoolgirls to have a real character, and it is interesting that White always refers to her as fat Flora, but this never sounds offensive or mean-spirited: it is not fat-shaming.

** One sideline intrigued me: the games mistress who died before Caroline arrived had ‘strained her heart getting her Bergman Osterberg Dip.’ I looked this up, thinking she was perfecting a difficult gymnastic move, but now I deduce it means her B-O Diploma. Marina Bergman Osterberg was a ‘Swedish-born physical education instructor and women's suffrage advocate who spent most of her working life in Britain’ – that’s according to her Wikipedia page, which is well worth a read. Now frankly it all sounds a lot like Leys teacher training college in the revered Miss Pym Disposes by Jospehine Tey, with its Swedish instructor and women going out to teach. I think the dead games mistress might have been the unfortunate Rouse if she’d managed to survive Leys instead of dying there – she was doomed to be murdered sooner or later…. (Miss Pym is much featured on the blog, and will be the topic of the chapter I have contributed to a forthcoming book edited by Curtis Evans.)

John at Pretty Sinister Books took a thorough look at The Third Eye here and has a lot more detail of the plot and atmosphere, and Curt at Passing Tramp similarly gives it a good going-over here – these two blogposts would very much complement my tangential view of the book for anyone interested.

The pictures are from a girls' annual from a few years before the date of the book.

Plenty more Ethel Lina White all over the blog, and plenty more books set in schools – click on the labels below.