Dress Down Sunday: While She Sleeps by Ethel Lina White 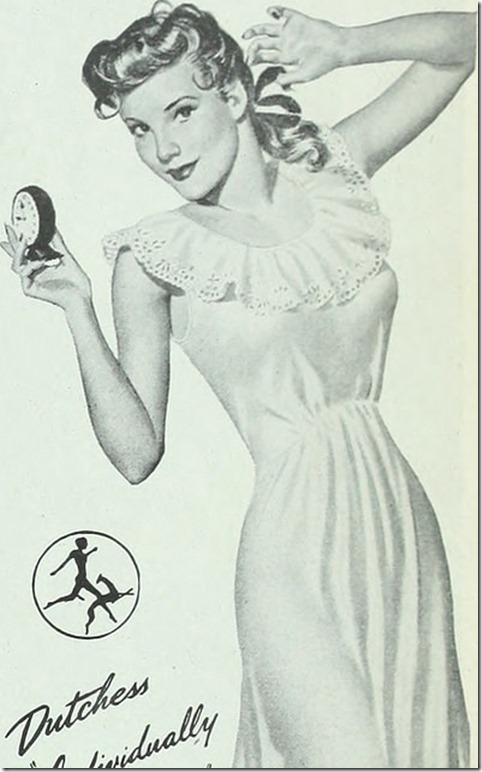 Miss Loveapple awoke with a smile. She had slept well; her digestion was good— her conscience clear; and she had not an enemy in the world. There was nothing to warn her that, within the next hour, she would be selected as a victim to be murdered. As she threw aside the sheets and sat up in bed, she looked beautiful. Just as every dog has his day, every woman has her hour. Since Miss Loveapple's dress allowance was shaved to the limit, she triumphed when she was in undress.

Her low sleeveless nightdress revealed the whiteness of her skin which had not been exposed to the sun. Her fair hair fell over her shoulders in thick plaits. As she stretched out her arms in a yawn, she seemed to be welcoming the gift of life. It was a blue windy day in late summer. The sun shone brightly upon her toilet table, striking through the cut-glass trinket set in rainbow gleams. She could hear the welcome rattle of china which told her that the maid was mounting the stairs with her early tea and the Times.


commentary: I’ve been absolutely loving my trundle through the works of Ethel Lina White, and this wasn’t the book to change that – I enjoyed it immensely, despite its having some features that I think might drive other readers up the wall.

The passage above is the opening of the book: Miss Loveapple is in danger of being murdered. The book then follows her own activities – which are lightweight and low-key, though important to her – and in parallel slowly reveals a dastardly plot which has put her in deadly danger. This is, frankly, all ludicrous, but it is also terrific fun. There is a trope that Miss L never has a clue what is going on, and she alternately avoids and invites danger without knowing what she is doing, but has a constant refrain in her own head about how lucky or unlucky she is – and of course this doesn’t match up with the reality. I found this very very entertaining.

The plot IS all over the place – as is her wont, White throws in everything: a village fete, a visiting Lady, a trip to Switzerland, a subplot concerning jewel theft, a possibility of rat poison, a borrowed attache case, a dark tour of Paris and an opium den. White always likes train journeys, and there is an excellent one here - across Europe - and she also likes older ladies of great integrity who save the day.

AND, best of all, she always describes the clothes – and often gives them a role to play in the plot.

Miss L (we never find out her true first name) has an unlikely clothes foible:


Whether she worked in the house or garden, Miss Loveapple's official wear was shorts. These were ready-made and possessed the discretion of the Boy Scout pattern, rather than the frankness of a bathing belle model. All the same, she paid tribute to local susceptibilities by buttoning a grey flannel skirt over them before she went into the village.

-- but then is horrified by another woman’s choices:


The morning she came down to breakfast wearing navy blue trousers, Miss Loveapple could not control her indignation. 'I never saw a more disgusting spectacle,' she declared to Olivia Furse. I'd rather go naked than wear trousers.' To vindicate her outraged modesty, she went up to her room and cut two inches off her Boy Scout shorts.

The combination of the shorts, and an ill-fated black satin suit, change the way people look at her on holiday, and have their effect on the plot.

Meanwhile there are two women telling fortunes: one wears ‘an artistic gown of nasturtium-hued velvet and a long string of amber beads.’ The other ‘wore a huddle of black draperies and her head and face were covered by a wine-red veil, under which gleamed a metallic-gold mask, slitted for eyes and lips.’ 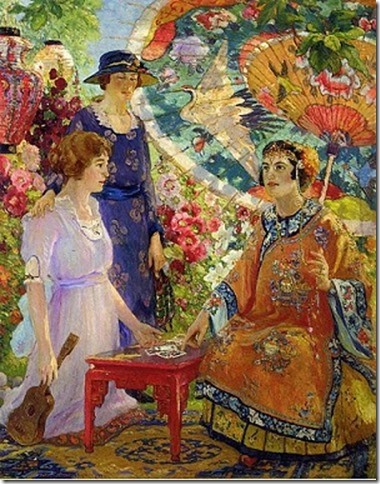 And more: a woman in ‘black georgette, trimmed with monkey-fur, and high-heeled toeless sandals’ (you can tell she’s a bad lot). An evening outfit of ‘a white Ottoman silk coatee worn over the black satin skirt of her suit’. A house-pyjama-suit and ‘a full-skirted house-coat, pale yellow in colour and patterned with brilliant flowers.’

I honestly don’t think this book would be to everyone’s taste, but I loved it. Miss Loveapple reminded me of Jane Austen’s Emma (one lives in Highfield, one Hartfield), and while you wouldn’t compare the two authors’ literary skills, their heroines are equally enjoyable.

The nightdress is from the Ladies Home Journal of the era.

The fortune teller is by Colin Campbell Cooper from the 1920s.