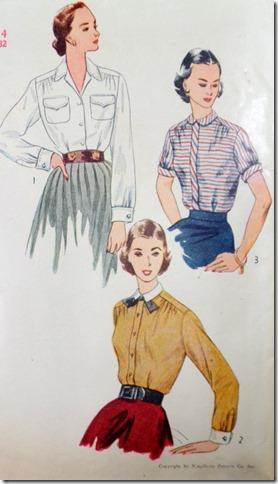 The door opened and he had his daily moment of pleasure at having a beautiful secretary. ‘Morning, Lil,’ he said….

She turned away from the window. She was dressed in a sugar-pink and white striped shirt and a plain dark blue skirt. Bond smiled into her grey eyes. ‘I only call you Lil on Mondays,’ he said. ‘Miss Ponsonby the rest of the week. But I’ll never call you Loelia. It sounds like somebody in an indecent limerick. Any messages?’

Miss Moneypenny, M.’ s private secretary, looked up from her typewriter and smiled at him. They liked each other and she knew that Bond admired her looks. She was wearing the same model shirt as his own secretary, but with blue stripes. ‘New uniform, Penny?’ said Bond. She laughed. ‘Loelia and I share the same little woman,’ she said. ‘We tossed and I got blue.’ A snort came through the open door of the adjoining room. The Chief of Staff, a man of about Bond’s age, came out, a sardonic grin on his pale, overworked face.

Gala Brand had stubbed out her breakfast cigarette, swallowed the remains of her coffee, left her bedroom and walked across to the site, looking very much the private secretary in a spotless white shirt and dark blue pleated skirt.

commentary: And on to the third James Bond book, where we see a lot more of what you might call his routine daily life.

A question arises: why does James Bond need a secretary? What does she do all day? Hers is a senior role, as secretarial (and women’s) posts go: she is a Principal Secretary. But why? Presumably she types up reports at the end of a case, and makes occasional appointments for him, but apart from that… In this book Bond’s routine work includes practising with firearms and reading important reports, for example:


Possible points of concealment on trains. No. II. Germany.

Don’t need a secretary for that. Her main role in Moonraker is to obtain emergency supplies of Benzedrine (which I was surprised to find is an amphetamine) for Bond and have it delivered to him in a gambling club.

He has been called in by M for a personal matter: Sir Hugo Drax is a leading businessman and national hero who has invented a splendid rocket for the UK. He is very wealthy. So why does he cheat at cards? Bond goes to the exclusive gambling club Blades (cue plenty of descriptive writing, and the charm of smoked salmon being seen as an extreme luxury item) and sorts him out in a riveting game of bridge. But then circumstances intervene, and he is suddenly called on to look at security at Drax’s massive complex in Kent. Dutiful, though slightly embarrassed, he heads off there:


A genuine admiration for the man gradually developed in him and overshadowed much of his previous dislike. He felt more than ever inclined to forget the Blades affair now that he was faced with the other Drax, the creator and inspired leader of a remarkable enterprise.

I don’t think it is a spoiler at this stage to say that Drax is not all he seems – if you have ever read a Bond book or seen a Bond film you know that. In a previous entry, I commented on how odd it was that Bond was so far behind the reader in what he knows – it is even more pointed in this case. Of course it’s hard now to imagine what it was like to read the book when it was very new. Did the plot and the writing really suggest that Drax was going to turn out to be the hero? Bond continues to believe in him for a long time. It’s not clear what the reader is meant to think.

More to come on this book in a second entry.

Picture is a sewing pattern of the era.