Clothes probably don’t make the man, but they can tell us a lot about him. If the man is a man in fiction his clothes will tell us something of his role as well as of his character. We expect the hero of a Western to dress differently from the villain in a fairly specific way. Bond is nowhere as stylized as that, but a handy reference-point can be set up by noticing that, sartorially,  he is pitched midway between the dandyism of [John] Steed [of the TV programme The Avengers] and the reach-me-down anonymity of [Inspector Charles] Barlow [of TV programmes Z Cars & Softly Softly]. Sea Island cotton shirt, tropical worsted trousers, black leather sandals for relaxing, dark blue alpaca suit with thin black knotted tie for ordinary purposes, Hong Kong pyjamas – clothes we should like to wear (unlike Barlow’s) and would dare to (unlike Steed’s).

Bond as dresser, then, takes us in the direction of wish-fulfilment without losing contact with what we commonly regard as real or likely. This indicates his role as a contemporary hero. To keep to the middle road between fantasy and realism is what we ask of any really powerful fantasy-figure, such as Bond is. 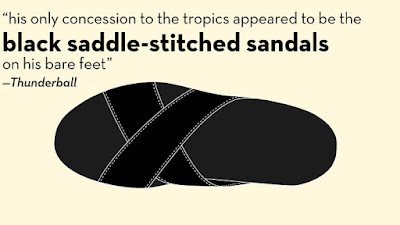 commentary: Who would have thought that either Kingsley Amis or James Bond would be explaining the purpose of the Clothes in Books blog so well?

After my recent delight in a collection of Ian Fleming’s letters, I was tempted by this book which I first read many many years ago, at a time when I probably didn’t know who Kingsley Amis was. It stood up very well – although very much of its time, it is a fascinating and very funny and clever read. Amis has just the right attitude – his analyses are clever, and he brings his considerable intellect to bear on the subject, while showing that he is a real fan. He looks at various topics – the women (of course), the guns, the attitudes and patriotism in the service, the casinos, the Shertel-Sachsenberg System. He pokes gentle fun at some of Fleming’s writing, but never in a superior way.

I liked this description:
When the frogman’s suit arrives for Bond in Live and Let Die, I can join with him in blessing the efficiency of M’s ‘Q’ branch, whereas I know full well that, given post-war standards of British workmanship, the thing would either choke him or take him straight to the bottom.
And he goes on to say:
Whatever any given new Bond may contain, it will not contain bitter protests or biting satire or even witty commentary about the state of the nation. We can get all that at home.

The Dossier has some knowledge of the early films, but is very much based on the books, and has confirmed me in my view that one project for 2016 must be to re-read all the Bond novels. There is a useful chart at the end of the Amis book, with categories such as ‘villain’s project’, ‘minor villains’, and ‘highlights’ for each of the books, along with helpful verdicts such as ‘M at his most unspeakable’ and ‘masterly handling of implausible material.’ I can see I will have the Dossier at hand throughout my reading plan.

Time again to praise the wonderful website, The Suits of James Bond. The pictures are from a page showing ‘what the literary James Bond’s clothes may have looked like’, but you really really should go over to the page itself to see everything Amis described above. Kudos to creator Matt Spaiser, a graphic designer located in New York, who created this irresistible site.
Ian Fleming James Bond James Bond Dossier Kingsley Amis sandals