Dress Down Sunday: The Best Fancy Dress This Year 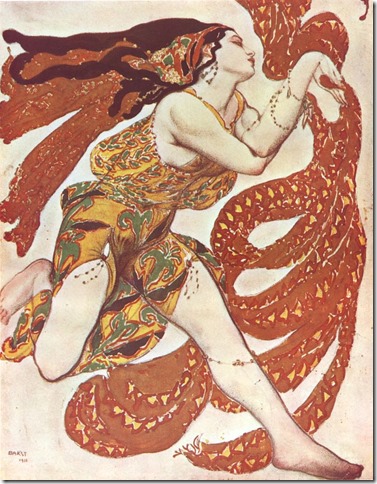 [Babbacombes store is holding a fancy dress ball for employees. Dulcie is planning her costume:]


There had been a picture of a chorus girl dressed as a bacchante. In the photograph the girl had worn some strips of chiffon which seemed to be attached nowhere and showed masses of leg. Dulcie schemed a dress on the same lines, a dress made of bits of coloured chiffon which would fall in to a little short ragged skirt when she stood still, but which any man who was a man would discover could be lifted by the flick of a finger to show almost invisible shell-pink trunks. 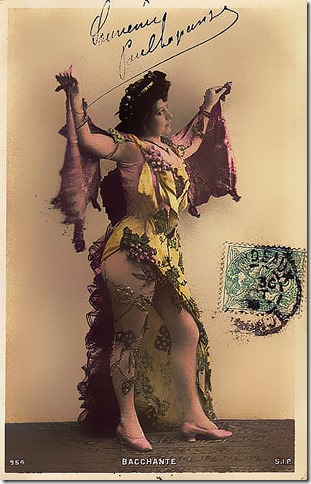 [At the ball, her partners are very appreciative of Dulcie’s costume]

“Let me go” said Dulcie. “You’re pulling up my skirt.”

The thought of pulling up Dulcie’s skirt elevated the already over-excited Joe. With a whoop he lifted Dulcie on to the bar.

Two other men came in to have a drink. Seeing Dulcie and her legs, they came over to join the fun… In a few minutes the party was going. Dulcie squealed delightedly and kicked up her legs, while the four men pulled at her chiffon skirts, pretending to lift the pieces.


commentary:  Never has 'looking at what goes on under the clothes' been a more literal description of the book extract.

See earlier entry for more about the plot of this book, a light romance by 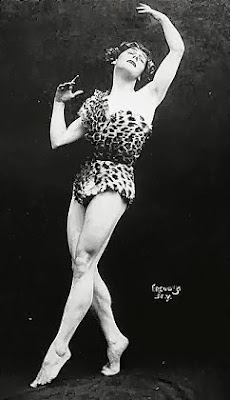 Streatfeild under a pseudonym.

I loved Babbacombe's anyway, and always love a fancy dress party, and this scene is wonderful just because it is so hilarious, and so vulgar, and so vivid, and somehow satisfyingly defies your expectations of what a 30s works ball would be like.

The costume also features a leopardskin top (over one shoulder, under the other....) so that seemed enough reason to pull out this picture again, a great blog favourite and source of past misunderstanding.

This is naughty Dulcie, the visiting cousin who thinks she is better than her host family, and is undoubtedly a bit of a go-er, and not very nice. (Did some Dulcie get across Noel S in her childhood? – it’s also the name of the wrong’un in her book Wintle’s Wonders). When she shows the family this outfit before leaving for the ball, and they tell her it is not decent, we are told that the heart-rending Edward, who needs an operation on his eyes, ‘felt his loss of sight more acutely than usual.’ I bet. ‘Not decent! What’s she got on?’ he says.

Goody-goody Beth, the heroine, meanwhile comes as a Quaker maiden in a dress which presumably covers her from neck to wrist to ankles, just in case you hadn’t got the point. You want to cheer on partygirl Dulcie, but Streatfeild blocks every avenue: Dulcie is horrible.

The clothes in the book are tremendous: Dulcie’s choices are flash and vulgar, while Beth has innate good taste. There is a black satin dress with a fake gold leather trim – ‘Dulcie looked common in it, but Girda [to whom she has lent it] looked frightful.’ 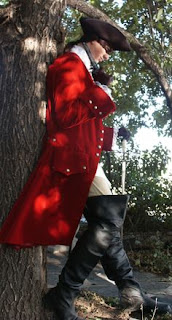 And I am completely mesmerized and fascinated by this: Dulcie is one of the team operating the lifts (elevators) in the store, and her uniform consists of ‘tricorne hat, many-collared coat, breeches and top boots’, and ‘represented glamour in Babbacombe’s.’ How I wish I could find a picture. She sounds like the principal boy in Dick Whittington.

BREAKING NEWS: My friend Bill, from the Mysteries and More website, has an unexpected eye for fashion, and often comes up with excellent responses and suggestions to Clothes in Books items. He is particularly harsh on any young woman who thinks she is dressed for practicality or cold weather but doesn't live up to his rigorous Saskatchewan standards - 'that hat wouldn't last a minute in a Canadian storm' he will say. And he has come up with this picture, above, to give an idea what the lift operatives wore. I think we can all agree that the customers at Babbacombe's would be more than happy with this as they zoomed up and down from Inexpensive Millinery to Cooked Meats.


‘All the girls in Babbacombe’s wore green – a dark green in any material. [They had bought] a model going cheap in heavy moss-coloured cloth… an amusing yet simple garment that suited Beth’s colouring.’

There is not a great deal of resemblance between Noel Streatfeild and Colm Toibin, but the department store – under the control of a family – was very similar to that in the recently blogged Brooklyn.

You would guess that Streatfeild did her time as a junior in a Gowns department – I was startled by how much her description of the job resonated with me, from a brief period when I worked as a junior in a dress shop many many years ago. (Though not quite reaching back to when the book was published.)

Bacchantes - the top one is a theatrical costume by Bakst -  from Wikimedia Commons. Green dress from NYPL.