The Story of a New Name by Elena Ferrante 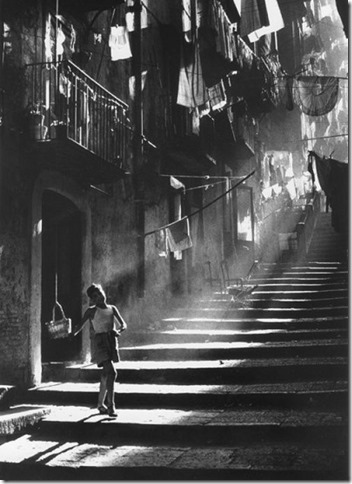 One Sunday – on Sundays Stefano slept until noon – we were going out for a walk and she pressed me to go to the Bar Solara. When she appeared on the new street, still white with lime, I was astonished. She was extravagantly dressed and made up: she was neither the shabby Lila of long ago nor the Jackie Kennedy of the glossy magazines but, based on the films we liked, maybe Jennifer Jones in Duel in the Sun, maybe Ava Gardner in The Sun Also Rises.

Walking next to her I felt embarrassment and also a sense of danger. It seemed to me that she was risking not only gossip but ridicule, and that both reflected on me, a sort of colorless but loyal puppy who served as her escort.

Everything about her – the hair, the earrings, the close-fitting blouse, the tight skirt, the way she walked – was unsuitable for the gray streets of the neighbourhood. Male gazes, at the sight of her, seemed to start, as if offended. The women, especially the old ones, didn’t limit themselves to bewildered expressions: some stopped on the edge of the sidewalk and stood watching her, with a laugh that was both amused and uneasy…. 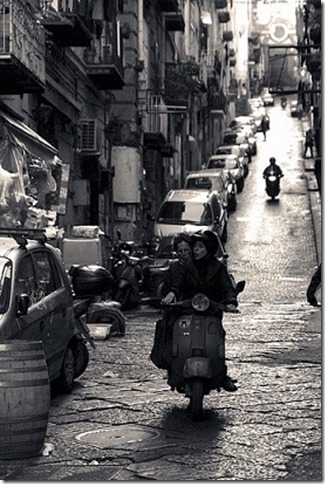 observations: The fourth book in this series came out last week, to enormous excitement amongst those who have discovered #FerrranteFever. This is the second book in the series - in my blogpost on the first one, My Brilliant Friend, I described some of the interest and mystery surrounding the writer.

As I predicted, I liked this one even more than the first as Lila and Lenu grow up. The complex families of the neighbourhood are still quite hard to follow – I keep having to look up who everyone is in the very helpful list at the beginning. But the characters do take up residence in your mind, and their lives become very real. Ferrante shows the circumspection of their world (the girls have never been in a lift, they have never been to the theatre) and the way they are ruled by poverty and violence, and rules of honour and shame. She is very good on the female experience, and I would say her writing about women’s lives is unlike anything I have ever read, but she also shows that the men too are trapped just as much by the system and the rules and obligations.

There is some question about Ferrante’s background, which I cannot comment on. The books do not give me a clear picture of Naples - the poverty and the neighbourhood could easily be in another big city - so perhaps there is something in the rumour that she is not from Naples at all. But I do NOT believe the suggestion that she is actually a man. The section in which Lenu describes how, as a young woman, she has to be clever enough for her boyfriend, but not to have read books he hasn’t or she will be frowned on, is all too convincing. And then follows the dreadful scene where she proudly brings her crush and her friend together. Nino has told Lenu he is too busy reading important things to read fiction, but suddenly he is all over Lila and her Beckett and is asking to borrow the book (which is Lenu’s in the first place)… I felt the pangs as if it were happening to me.

Lila gets married young and disastrously: Lenu goes on to an education, but she fears she lacks the contacts and the knowhow to get on in life, and she explains her fears beautifully. She can learn all she wants from books, but she cannot gain an understanding of how the world works that comes naturally to her better-off fellow-students.

I liked this book very much, and am really looking forward to the next one. But I do have to say something about the translation, which I touched on in my earlier post.

Here are three consecutive lines in the book:


She invited me to lunch the next day, Holy Friday.

That was not the only invitation I had, the days were full. Soon afterward Pasquale called me from the courtyard and, as if I were descending from an Olympus instead of from my parents’ dark house, wanted to expound to me his ideas about women…

It’s called Good Friday, not Holy Friday, in English: there should either be a different punctuation mark or a conjunction in the second sentence: and what on earth is that ‘an’ doing before Olympus in the third? This kind of clunkiness recurs throughout the book. The sentence beginning ‘Male gazes’ in the extract above is terrible, and to take another line at random, how about this:


‘You’ll see, that garbage will sell even better than the preceding.’

It reads as though the translation was done by someone for whom English is not the mother tongue.

I would not be so exercised by this except for the fact that the translator is head of the copy department at the New Yorker, not some beginner doing a translation for love.

And Ferrante deserves better for her glinting, glittering paragraphs.

The photos above are of Naples in the right era. There is a lovely description of two couples racing around on Lambrettas – but I think that’s a Vespa in the lower picture.