Agatha Christie was born on September 15th, 1890, so to celebrate her 125th anniversary we’re doing a week of entries* on her books, her life, and a book that influenced her….


I was not as powerful a swimmer as Archie, so it took me longer to get out to the reef. I had lost sight of him by that time, but I presumed he was shooting into shore in a negligent manner as others were doing. So I arranged myself on my board and waited for a wave. The wave came. It was the wrong wave. In next to no time I and my board were flung asunder. First of all the wave, having taken me in a violent down-ward dip, jolted me badly in the middle. When I arrived on the surface of the water again, gasping for breath, having swallowed quarts of salt water, I saw my board floating about half a mile away from me, going into shore. I myself had a laborious swim after it. It was retrieved for me by a young American, who greeted me with the words: ‘Say, sister, if I were you I wouldn’t come out surfing today. You take a nasty chance if you do. You take this board and get right into shore now.’ I followed his advice.

Before long Archie rejoined me. He too had been parted from his board. Being a stronger swimmer, though, he had got hold of it rather more quickly. He made one or two more trials, and succeeded in getting one good run. By that time we were bruised, scratched and completely exhausted. We returned our surf-boards, crawled up the beach, went up to our rooms, and fell exhausted on our beds. We slept for about four hours, but were still exhausted when we awoke. I said doubtfully to Archie: ‘I suppose there is a great deal of pleasure in surfing?’

The second time I took the water, a catastrophe 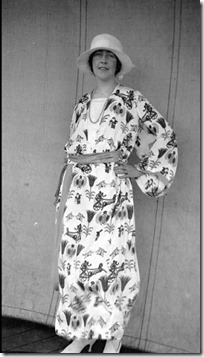 occurred. My handsome silk bathing dress, covering me from shoulder to ankle was more or less torn from me by the force of the waves. Almost nude, I made for my beach wrap. I had immediately to visit the hotel shop and provide myself with a wonderful, skimpy, emerald green wool bathing dress, which was the joy of my life, and in which I thought I looked remarkably well. Archie thought I did too. 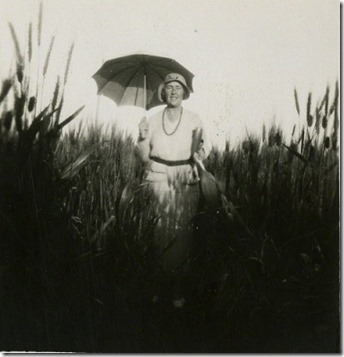 Previous entry on the autobiography is here - the book is highly recommended to anyone with an interest in Christie, or just in upper middle class life in the UK during the 20th century.

observations: It’s not just bathing suits – Christie has a big interest in clothes. She describes many of them in the book, and also describes how her mother and grandmothers were always buying lengths of material and decorations and stashing them away. When Christie’s mother died, she had to clear a house which was by now full of the belongings from two generations of the family, including trunks full of fabric, and this difficult task contributed to her meltdown, and the breakdown of her marriage, at this time.

Her parents’ background was rather odd – her mother had married her aunt’s stepson, the aunt being her own adoptive mother - so there was a very limited number of close relatives.

Christie is so sensible and interesting, and has such a knowledge of human life and relations, such a metaphorical twinkle in her eye. It comes as a shock when every so often she goes in for old-people’s-grump – no-one knows how to flirt anymore (really?), no-one is pretty anymore, no-one believes in good anymore.

Her relationship with her daughter seems awkward – but the mind also boggles at the happy young couple's going away for nine months without Rosalind, a toddler at the time. This is the round-the-world trip above, that features in both the autobiography and The Man in the Brown Suit (blogpost to come).

She buys and sells and rents property all the time. In her early married days there is no feeling that buying somewhere might be better than renting – she pulls out of a house purchase when a nicer rental flat comes up – but later on that all changes. At one point she owns 8 houses. The most beautiful is Greenway, the big white house on the River Dart in Devon. She said it was the most beautiful place in the world, and she may be right.

After her first marriage to Archie broke down she married archaeologist Max Mallowan: this seems to have been a very happy relationship. (Though there’s an intriguing moment in Sunday’s book, Death in the Clouds: a random anecdote about an Englishman who leaves a sick wife behind, abroad, because he has to go to work. This is something that had happened to Agatha and Max a few years previously…)

There are Agatha Christie entries all over the blog…. Click on the label below.

All the photographs of Agatha Christie, above and in previous entry,  are used with the kind permission of the Christie Archive Trust. There is a small but wonderful exhibition of her personal photos which has now left London and moved, appropriately enough, to Torquay.