Agatha Christie was born on September 15th, 1890, so to celebrate her 125th anniversary there’s going to be a week of entries on her books, her life, and a book that influenced her….

An Autobiography by Agatha Christie 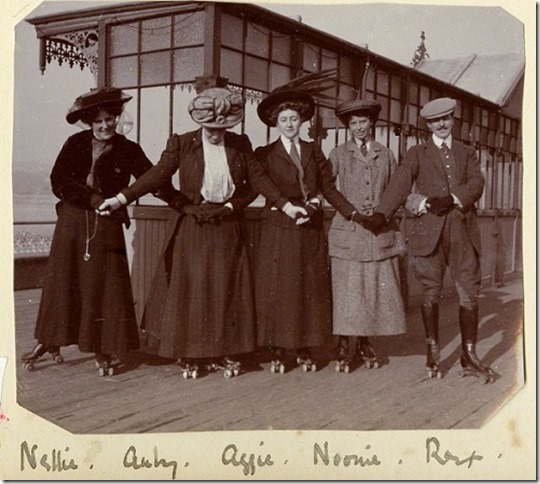 I discovered a new sport and new friends. Roller-skating on the pier was a pastime much in vogue. The surface of the pier was extremely rough, and you fell down a good deal, but it was great fun. There was a kind of concert-room at the end of the pier, not used in winter of course, and this was opened as a kind of indoor rink….

In describing my life I am struck by the way it sounds as though I and everybody else were extremely rich. Nowadays you certainly would have to be rich to do the same things, but in point of fact nearly all my friends came from homes of moderate income…

Girls had usually not more than three evening dresses, and they had to last you for some years. Your hats you painted with a shilling bottle of hat paint every season. We walked to parties, tennis parties and garden parties, though for evening dances in the country we would of course hire a cab… 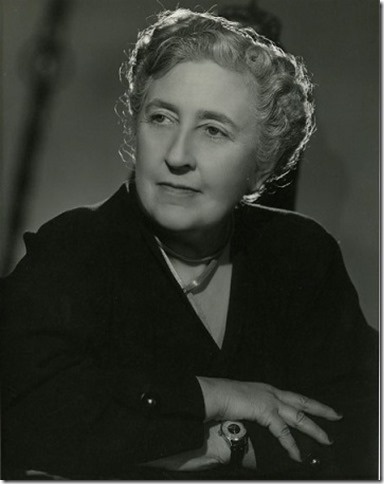 observations: Agatha is in the middle of the top photo above. She is with her friends the Lucy family. At one point she was semi-engaged to Reggie Lucy – might he be the chap on the right, is that what the scribble says? Their understanding foundered when she met Archibald Christie, whom she married in 1914.

Christie wrote her autobiography between about 1950 and 1966, to be published after her death, and it reads like that – as if she wrote a section now and again when she thought of it, roughly chronological but with diversions off into her view on this or that, or following a train of thought or action that gets out of synch. Then the whole thing has been put together without much in the way of editing. All that said, it is a tremendous read, I absolutely love it. It has a relaxed, chatty tone, and is full of the details that made her murder stories a) convincing and b) treasure troves of sociological documents. It would never have been printed if she wasn’t who she was, but it has endless fascination in matters unrelated to her writing. But still, you would also say that she has an eye and an ear for the telling detail, the key phrase, the important moment. This made her detective stories work, but also makes this such a great picture of a certain kind of upper middle class English life, long gone.

As she describes above, who spent money on what is always riveting, and at times you (and even she) are amazed at how a penniless couple with no jobs and no money can afford to keep servants. The question of saving money with the hat paint, above, comes up in her books, and Clothes in Books looked at the whole business here, in an entry on her Murder is Easy.

She has a nice self-deprecating air, along with a sense of her own worth. After quoting an early attempt at a poem she says “Could anything be more suggestive of a complete lack of literary talent?”

She gives away perhaps more than she intends to about her relations with her 1st husband, her 2nd husband, her mother and her daughter.

There is a very funny part where her post-deb daughter says she is interested in photography: Agatha is delighted. What an interesting and useful skill, especially in an archaeologists’ family. But Rosalind roars with laughter at this: she wants to be a model, being photographed in bathing-dresses. Agatha is horrified, and vetoes the plan (while going on to study photography herself.)

The books she wrote as Mary Westmacott, when read together with this book, are hugely autobiographical: many details are identical, leaving you to make whatever conclusions you want about the rest of them. (Several Westmacotts have been on the blog – including this one on the question of snoods – a discussion with a daughter repeated almost word for word in the autobiog.)

Laura Thompson’s biography of Christie can be speculative at times, and very much relies on the Westmacott books, but is a fascinating and helpful read.

Robert Barnard’s book on Agatha Christie is marvellous, and Martin Edwards’ recent Golden Age of Murder is another invaluable resource.

There are Agatha Christie entries all over the blog…. Click on the label below.

The photographs of Agatha Christie are used with the kind permission of the Christie Archive Trust. There is a small but wonderful exhibition of her personal photos – Agatha Christie: Unfinished Portrait - which has now left London and moved, appropriately enough, to Torquay.