Book of 1980: Dead Side of the Mike by Simon Brett 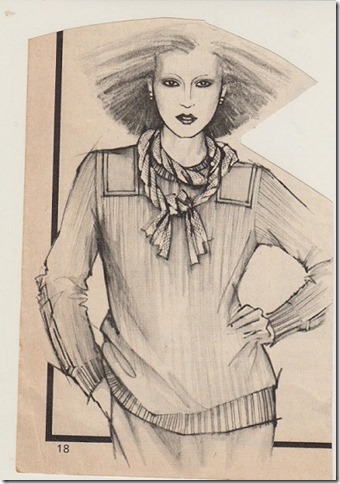 [Actor Charles Paris is drinking in the BBC bar with his friend Mark, a radio producer]


Charles shielded his cargo of drinks back to Mark, negotiating the rare stepping-stones of carpet through a maelstrom of handbags, briefcases and legs. Mark, predictably, was talking to a girl.

She was short, probably not more than five foot three, and dark. Centre-parted black hair, well cut, framed an olive face dominated by enormous brown eyes. Once you saw the eyes you didn’t notice the rest of her. Charles was vaguely aware of a boyish body in trim cord trousers and Guernsey sweater, but he was mesmerised by the eyes.

She was talking animatedly as he approached. ‘But come on, of course it’s a political issue. No education is apolitical. None of it’s pure information...’ 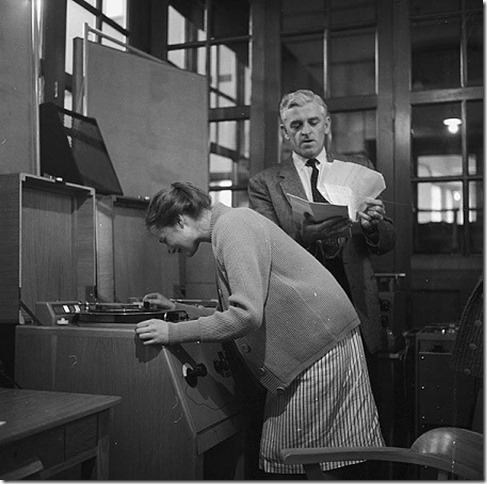 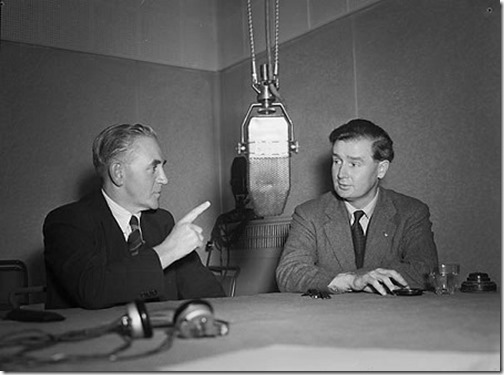 observations: Every month, Rich at Past Offences suggests a year, and bloggers pick a book from that year and write a post on it: Rich then does a round up over at his blog. This is the Crime of the Century meme. (Click here to read last month's post, 1987, with a title I am proud to say came from my contribution.)

Most months kind Karen Meek of the Eurocrime website does a list of possible titles for the chosen year – I’m sure we don’t thank her enough for this, and when I met her recently I was anxious to stress how much appreciated her list was. I certainly look out for it every month. This time I was determined to find a book from my existing bookshelves, and there it was: high up the alphabetical list, and a book I read when it first came out.

The Charles Paris mysteries were clever and witty – Paris was an older, not-very-successful actor who fell into a crime story from time to time, usually in a theatrical setting. One of the running jokes is that Paris thinks back to the various roles in his past, and the text appends a line of terrible review:


The Glaswegian voice was one had first used in a Thirty Minute Theatre (‘Is competence the highest we can hope for now in a television play?’ – The Financial Times)

Simon Brett is now a full-time and very prolific writer, but he worked in radio for a good while, and this book has such a feel for the BBC in those days – I worked at the BBC and at other radio organizations at the time and can vouch for the complete authenticity of the background detail, onto which a wild criminal plot has been imposed. The descriptions of BBC meetings and the BBC Club/Bar are very good, and show that nothing much has changed since – they would fit right into the modern BBC satire W1A.

The crime story, on the other hand, is a complete farrago, involving, of all things, criminals being given their instructions via a series of records on a Radio 2 programme. This is possibly the least likely plot turn I have come across this year.
But am I complaining? I am not. And this is why:

I am an old radio hand of so many years that I think ‘Yeah, go on, radio IS that important, the cost of producing radio programmes and paying the music unions at the time is a VERY VITAL matter, well worth the ludicrous array of crimes committed, the violence and death surrounding it. Radio IS glamorous, and exciting, and a bit louche, and of course wicked career criminals are going to be attracted to it. There could easily be Godfather-like gangs and gentlemanly lowlifes. They were lucky that some of us stayed incorrupt, we were people of high principle doing key jobs.’ Who is going to argue with me over that?

As a 1980 book – I was surprised by a mention of ‘energy conservationists’ discouraging too much aimless driving. And it hit home to me: someone dies in an editing suite, and all modern radio people, much younger than I, would not understand why there were razor blades there, all very handy for the criminal. Children, that’s what we used to edit tape in a pre-digital age.

So great fun for anyone I think – lots of good jokes, and Paris is always annoying yet entertaining. I liked his lawyer friend Gerald defending himself when Charles used the word ‘soliciting’:


‘Charles, soliciting is what loose women do in small rooms, extorting money from and denying satisfaction to the ignorant and the innocent. Whereas what I do…’
‘Yes?’

And, as I say, special opportunities for anyone who worked in radio. The Programme as Broadcast lists (showing what music was played) assume a huge importance in the plot, and I was suddenly taken back to arguing with the person making the list for me one time: ‘there must be another piece of music you haven’t put down’ she kept saying. The reason was that the 1st piece, and item on the list, was:

and she was reading it as

and she wanted to know what was really the 1st piece, what came before the Also? This would be a VITAL CLUE in this book.

So full marks for entertainment and nostalgia.

One young woman comes to a meeting


dressed in a man’s pin-striped suit, shirt and tie ‘as a protest against the sexist bias of the assembly.’ 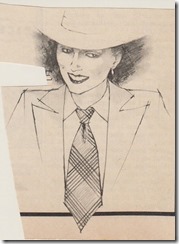 -- and there are subtle points here about the clothes. In theory it didn’t matter what you wore at the Beeb at that time, but in this book it is clear that women doing professional jobs are going to wear duller clothes than giggling young things in short skirts – this is VERY much 1980.

The two clothes pictures are from contemporary fashion magazines, the radio pictures from the National Library of Wales, showing BBC regional radio in the 1950s. Grams script and mike – none changed much in the next 20 years.

If you’ve made it this far, here’s a bit of blog news: I will be on holiday for ten days or so, and will not be blogging or blog-visiting or answering emails. Look forward to seeing you all again in mid-August.