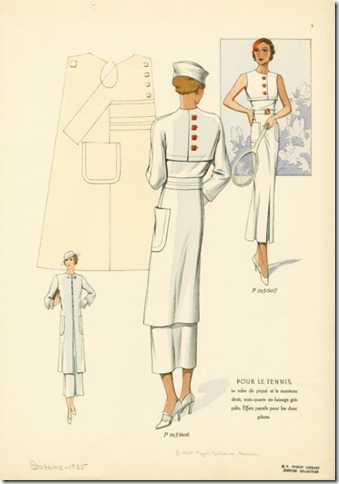 [Joan] wore a sleeveless white tennis-frock and silver slave-bangles on her brown arms.

[Julia] carried four racquets under her arm, and was complete in a short, white, sleeveless tennis frock, and eye-shade.

[Ada] wore a sleeveless white frock of cheap crêpe-de-Chine, silk stockings of the shade known as ‘muddy water’, and silver slave-bangles on her shapely arms.

Miss Asprey’s party really seemed an omen of happier days. There were no refusals… Joan Brook, who welcomed every distraction, was in excellent spirits. When Ada brought her cucumber sandwiches, she welcomed her with a friendly smile, for Joan was fortunate in having no sense of social values.

“Ada,” she said, “I dare you to copy my new dress. I don’t want to be wiped out by you again.” Ada did not attempt to contradict the obvious fact of her superior beauty, but she did her best to make her voice sound convincing. “Well, miss, they do say there’s some that prefer dark girls.”

observations: What a delight this was: I first became aware of it over at Rich Westwood’s Past Offences, and he told me that it was ‘quite clothesy #justsaying’. It’s about poison pen letters – always a favourite theme of mine, with a whole weekful of books and analysis on the blog last year.

I found it tense and intriguing: we are introduced to a village that seems picture perfect, with lovely happy inhabitants. So that can’t be true, can it? Once the letters start coming, everything falls apart. White has a very melodramatic way of personifying the Fear (as in the title) which got a bit much, but she was very good at building an atmosphere, and showing apparently calm characters, then slowly revealing the neuroses and worries below. It’s all a bit like the Mapp and Lucia books gone disastrously, criminally wrong.

The Rector asks Ada, who is respectful and polite but has hidden depths, where she is off out to: she virtuously replies that she is going to see her new baby brother. The Rector says to the doctor that he hadn’t realized there was a new baby in the family ‘how old is he?’


“About twenty-six,” replied the doctor. “He’s the Squire’s new chauffeur.”
The Rector laughed heartily at himself. “Fell for it, didn’t I? She took me up the garden.”


There is a woman who didn’t marry her beloved – her parents say ‘I sometimes wonder if we were wise when we wouldn’t let Vivian marry young Belson. After all, he was killed in the War’ – the point being (in case you suspected a nicer regret) that they wouldn’t have had to mix with his plainly lower-class family after all. Vivian herself has a quite different regret – that she didn’t sleep with him before he died – and this sketchy and pale character (often compared disparagingly with the main young woman in the book) suddenly comes to life for one scene.

There is a splendid line for Curtis Evans and his Passing Tramp blog: a woman says she can’t go out and leave the house empty ‘


accepting the current fiction that any unprotected woman could foil the felony of the most brutal tramp, by merely sitting in her own drawing room.

And on top of all this, White tells you what everyone is wearing, and also traces how the beautiful maid, Ada, copies the clothes of the other women. l liked Joan challenging her with this, above, so have made sure that the new dress - the black and white one -  would look better on her than on Ada (who is blonde).

Miss Mack has a best frock in ‘printed reseda-green foulard’ - I had never heard of this but it is a real colour and you can see a sample of it on this colour chart page. It is something like the colour of this dress to the right:

Though a print foulard would look more like this one below:

There is a lady novelist who sounds like a cross between Dorothy L Sayers and Margery Allingham (in appearance and manner, not in her writing) who wears ‘an infantile Buster Brown blouse adorned with wide collar and ribbon bow’ – Buster Brown was a cartoon character who wore this distinctive collar. 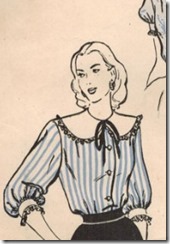 I could have done with more explanation at the end – some of the plot strands seemed unresolved – but overall this was a really good read. Up till now I had only read White’s The Wheel Spins/The Lady Vanishes, but I will certainly look out for more.
All the big pictures are from the NYPL, a collection of 1930s fashion illustrations.