Dress Down Sunday: She Won’t Need Them Now

the book:  Except The Dying by Maureen Jennings 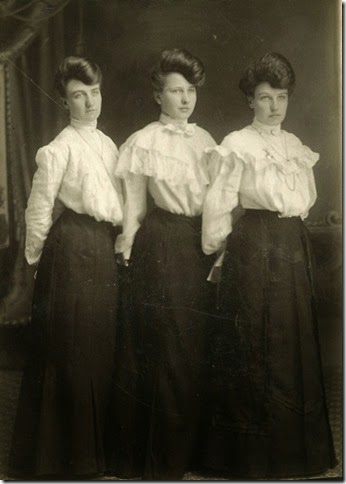 They started with the boots, which looked new. They tried to hurry but their fingers were already stiff and clumsy with cold and the buttons were troublesome. The second boot was particularly difficult. She was curled up on her side against the fence and the leather had fastened to the earth in an icy bond. It took both of them to get it off, one holding on to the frozen leg, by now stiff as stone, the other tugging until the boot came away. Next was the waist, a decent black sateen, but in their haste they pulled on her arm too sharply and they heard the bone snap as the elbow dislocated. “Be more respectful,” said the younger one.

They removed the felt hat next. The pink velvet flowers around the brim were crushed by the weight of the head and dusted with snow light as sugar. The skirt came off easily, as did the woollen stockings. There were no gloves and, disappointingly, there was no jewellery to speak of … One of them started to pull out the wooden combs that pinned up the girl’s hair. “No, don’t,” said the other. “She won’t need them now,” her companion replied. In the darkness their breath came from their mouths like smoke.

The corpse was clad now only in white flannel drawers and chemise, the blue-grey skin of legs and arms blending with the snow where she lay. They considered leaving her, considered stopping at the final indignity, but the cloth of the undergarments was good and they had gone this far. 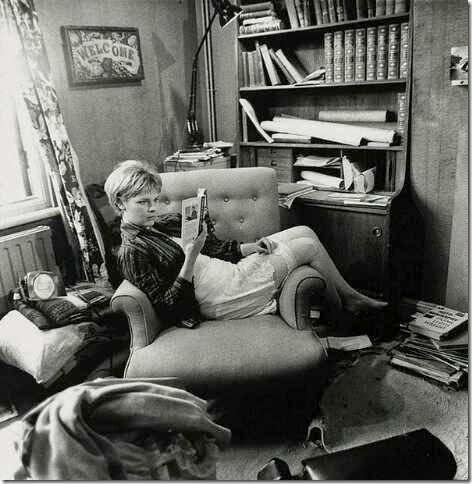 observations: This extract starts with the first words of the first of seven novels about William Murdoch, a detective in 1890s Toronto. It might almost have been designed to make it into Clothes In Books, and on Dress Down Sunday too. But we can’t quite accuse Maureen Jennings of that, when she was writing more than a decade before CiB started.

It is soon obvious that the person being stripped is deceased, but it’s relevant to the plot later on who’s doing the disrobing, so I won’t go into that. Her “waist” in this context means a blouse. Her outside clothes would have looked much like those of the three ladies with the spectacular quiffs: it’s surprising to see that hairdo in 1902 (although, no doubt someone will correct that statement in the Comments…) but as far as I can tell that’s when the photo was taken. The connection with the surprising shot of a young [Dame] Judi Dench in old-fashioned possibly-woollen stockings is a bit more tenuous; but the photo had to be used some time. No excuse too weak.

If you’ve seen the Canadian TV show Murdoch Mysteries, you’ll know that the detective is a devout Catholic - problematic in a society and police force dominated by Protestants and Masons - and has a bluff northern English boss called Brackenreid and a faithful constable called Crabtree. These are all true in the books too, but the similarities pretty much end there. Brackenreid is a rough diamond in the show, whereas in the books he’s just rough, there are few redeeming features visible most of the time. The Crabtree of the TV show has a big heart and is over-enthusiastic, but he’s shrewd and clever and imaginative and often points Murdoch in the right direction without getting much credit. In the books he’s physically massive, and more of a blunt instrument in Murdoch’s service than anything else.

Murdoch himself is more cool and suave in the show than the hesitant, socially awkward innocent we’re used to from the internal monologue of the books. But he is of course utterly honest and reliable in both incarnations, and perhaps cleverer and more attractive than he realises.

The books are dark. They go digging into the underclass quite a lot, showing how difficult life in late-Victorian times was for the poor or disadvantaged – the latter including nearly all women, even if they were well off. There are TV movies of three of them. You can see the film of this first book on YouTube.

The TV show meanwhile is light hearted, by murder mystery standards, a bit like Murder, She Wrote or Rosemary & Thyme; and drifts into pure comedy for episodes at a time. It often features real-life characters in doubtless fictional adventures.