Posted by Clothes In Books on January 02, 2015
the book: Brideshead Revisited by Evelyn Waugh 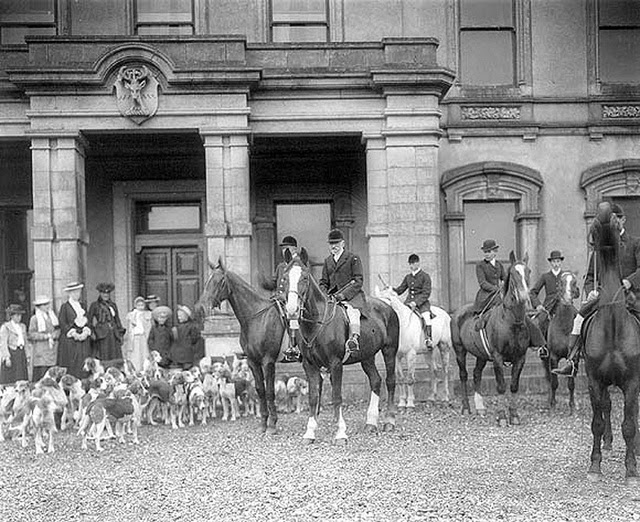 Next morning at breakfast Brideshead wore scarlet; Cordelia, very smart herself, with her chin held high over her white stock, wailed when Sebastian appeared in a tweed coat: ‘Oh, Sebastian, you can’t come out like that. Do go and change. You look so lovely in hunting clothes.’

‘That’s a fib. I helped get them out myself before you were called.’

‘Half the things are missing.’

‘It just encourages the Strickland-Venableses. They’re behaving rottenly. They’ve even taken their grooms out of top hats.’

It was a quarter to eleven before the horses were brought round, but no one else appeared downstairs; it was as though they were in hiding, listening for Sebastian’s retreating hooves before showing themselves. Just as he was about to start, when the others were already mounted, Sebastian beckoned me into the hall. On the table beside his hat, gloves, whip, and sandwiches, lay the flask he had put out to be filled. He picked it up and shook it; it was empty. ‘You see,’ he said, ‘I can’t even be trusted that far. It’s they who are mad, not me. Now you can’t refuse me money.’ I gave him a pound. ‘More,’ he said. I gave him another and watched him mount and trot after his brother and sister.

observations: The extended sadness of Sebastian's story has its heart in this Christmas visit to Brideshead by Charles Ryder. I did a piece on the book last week for the Guardian's Families in Literature series, and was struck by this section, and how well-done it was, and how sad, and how decisive and divisive in terms of the plot.

Surprisingly, the house's name is Brideshead Castle, though only for historical reasons - it is clear that the Brideshead Charles visits is not a castle at all.

The post-Christmas meet was a British tradition – see this post on the Diary of a Provincial Lady, and it also turns up in Nancy Mitford, and even in Antonia Forest’s YA novels. In posh places with a houseparty, there is often a tension because hosts and guests may or may not want to go hunting, may or may not have access to a horse, may or may not actually want to get up early and ride.

In this case, Sebastian is happy enough to leave his friend. The problem is the drinking. The whole household (including the servants) is aware of the issue and trying to decide the best thing to do. The writing is perfectly poised, with Waugh/Ryder fully aware that helping Sebastian drink is disastrous. As Lady Marchmain will later say to Charles:

I was unmoved; there was no part of me remotely touched by her distress.

‘Did you have a “little talk” with mummy?’

‘Have you gone over to her side?’

The day before I would have said: ‘There aren’t two sides’; that day I said, ‘No, I’m with you, “Sebastian contra mundum”.’ And that was all the conversation we had on the subject, then or ever.


The picture, from the National Library of Ireland, is of a meet in Waterford.

A hunt features in another Waugh book, A Handful of Dust.