Dress Down Sunday: A Running Duck by Paula Gosling 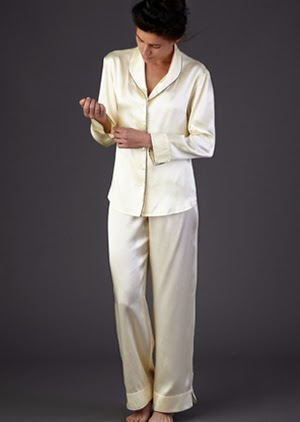 [Clare and Malchek are on the run, pretending to be a couple and hiding out along the way]

The double-bed in the first motel was a problem. To toss a coin and stick one of them with a chair or the floor seemed juvenile. In the end they both got ready for bed, went to bed, and lay on the bed, wrapped in more than blankets.

He was very aware of her nakedness under the white pyjamas she had chosen in an effort to appear sexless. In fact, all they did was outline her body even more emphatically than a nightgown would have done.

Normally he simply slept in his skin, but had borrowed some pyjamas for the trip. They constricted him and he felt strange, finally tossing the top back into the suitcase.

observations: Rich Westwood at Past Offences rediscovered this book a while back, and so I picked up a cheap copy in the hope of some splendid 1970s fashions for a blog entry. I had read a couple of later Paula Gosling books, but this one was very different: a tough, hard-boiled kind of book – as proved by the astonishing fact that it was turned into a Sylvester Stallone film, Cobra. The heroine is an executive at an ad agency in San Francisco: I’d envisaged nice scenes among the account managers, as in books by Dorothy L Sayers (Murder Must Advertize) and CS Forester (Plain Murder) featured in a short Ad Agency meme on the blog in 2013. (I was prepared to include this new one in my ranking of the best agencies to work at.)

But no: Clare is the only witness to the aftermath of a murder, and could identify the hitman, so she is in danger. A rough tough cop, Malchek, is desperate to catch the hitman – in fact he is more interested in that than in protecting the witness. Well, at first anyway. They end up racing around northern California, visiting small towns, almost catching the enemy, almost being caught. (I really enjoyed their travels through the redwood forests – having visited them myself under less fraught circumstances I know how beautiful and restful they are.)

It’s all very much of its time, and very typical of a certain kind of crime book by a woman which seems to be setting out to show the author can be as tough as any man, including a particularly weird moment early on concerning semen - which nowadays would be a source of DNA and a means of id-ing the shooter. There’s this wince-making sentence: ‘The receptionist was an ardent feminist, in between boyfriends’ – which I would have objected to just as much in 1978 as I do now. At the same time, when Clare tells the cops she works at an ad agency, they say ‘What do you do there? Secretary?’ It all reminded me rather of the Mary Tyler Moore Show of blessed memory, and I would have enjoyed more of the single-girl-setting – but she must away to the woods with the strong silent Malchek…

Mostly historical interest then. A Running Duck presumably means ‘as opposed to sitting duck’ and seems a particularly stupid title – worse even than Cobra. The book was called Fair Game in the USA.

Click on the labels for more pyjamas of various kinds.