Book of 1915: The Lost Prince by Frances Hodgson Burnett 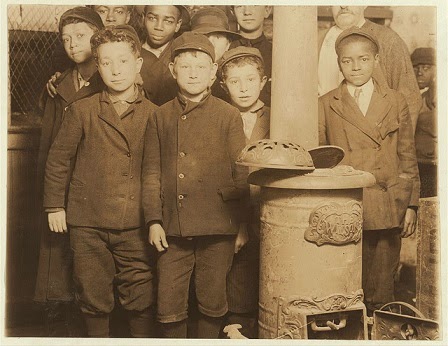 [12-year-old Marco, not long living in London and lonely, is walking the streets]

Marco heard a clamour of boys' voices, and he wanted to see what they were doing. ..Half-way to the street's end there was an arched brick passage. The boys were not playing, but listening to one of their number who was reading to them from a newspaper.

Marco listened also, standing in the dark arched outlet at its end and watching the boy who read. He was a strange little creature with a big forehead, and deep eyes which were curiously sharp. Near him were a number of sticks stacked together as if they were rifles. One of the first things that Marco noticed was that he had a savage little face marked with lines as if he had been angry all his life...

[later the boys are drilling] "Form in line!" ordered The Rat.

They did it at once, and held their backs and legs straight and their heads up amazingly well. Each had seized one of the stick guns.

The Rat himself sat up straight on his platform. There was actually something military in the bearing of his lean body. His voice lost its squeak and its sharpness became commanding.

He put the dozen lads through the drill as if he had been a smart young officer. And the drill itself was prompt and smart enough to have done credit to practised soldiers in barracks. It made Marco involuntarily stand very straight himself, and watch with surprised interest.

observations: Rich Westwood at the Past Offences blog chose 1915 for this month’s meme – see all the details here. Crime novels weren’t nearly as common then, and I was casting around for something to read when I came across this book, which was a childhood favourite. It’s not crime, but it is certainly a good strong adventure thriller, in the tradition of John Buchan’s 39 Steps (also 1915) or Anthony Hope’s Prisoner of Zenda. There is a mystery or a secret at the heart, but if anyone (including the children at whom it is aimed) doesn’t guess it by about page 50 I’d be surprised.

Marco is 12: he and his father Stefan have been wandering round Europe for as long as he can remember. He knows that they are actually Samavian, but cannot return there because of the political situation and warring factions. Samavia is an invented Ruritanian/Balkan state, as much loved in books of the first half of the 20th century. (Agatha Christie invented one for her early thrillers and then kept changing – or, one suspects, forgetting – its name). Marco and his Dad are patriots and have ‘warm Southern blood’. Eventually Marco realizes that his father is working towards a better future for Samavia – if only the Lost Prince could be found to take over the throne! Meanwhile Marco and his new friend The Rat play war games and ‘practise’ for a role they might play in the rescue of the country.

Then a message needs to go out, and Marco and The Rat set off: they will be unnoticed as poor children in rags, and can go to the great cities of Europe, and in each place seek out a local Samavian supporter (who might be anything from a shop-keeper to the Chancellor), a member of the Secret Party, and pass on the message: ‘The Lamp is Lighted’, to start the revolution. Quite honestly, if that plot doesn’t thrill you to the marrow, then you are not worthy of this book – I loved the idea when I was 10, and I love it now. It’s like a cross between John le Carre and Rudyard Kipling’s Kim.

It is by no means a perfect book – I could have done with a lot less of the unquestioned social stratification and the grovelling of the lower classes to the toffs. I quite hoped for a workers’ revolution in Samavia, but that was never going to happen.

At the end Marco is provided with ‘a richly decorated Samavian uniform’ – I hope this is not a spoiler – ‘which had a touch of the Orient in its picturesque splendor. A short fur-bordered mantle hung by a jeweled chain from the shoulders, and there was much magnificent embroidery of color and gold.’ 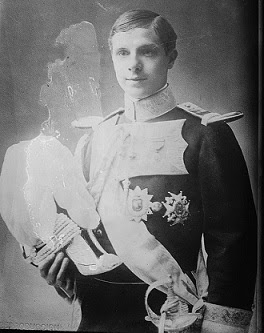 As a 1915 book for Rich’s meme it shouts out (as no doubt many will) as a book that was published then but had been written before the outbreak of the First World War in 1914: as I say above, it was quite unquestioning about life, and the future, and politics, and the excitement of war.

1910 newsboys from the Library of Congress.

Plenty more Francis Hodgson Burnett on the blog – click on the label below.