[A young playwright is reading his latest work to a family party at Christmas: here he is reading the opening stage directions, setting the scene]

'A pair of soiled pink corsets are flung across the only armchair.’ He looked round in a challenging kind of way as he enunciated this, and appeared to wait for comment.

‘Ah yes, I see!’ said Joseph, with a deprecating glance at the assembled company. ‘You wish to convey an atmosphere of sordidness.’

‘And let us admit freely that you have succeeded,’ said Stephen cordially.

‘I always think there’s something frightfully sordid about corsets, don’t you?’ said Valerie. ‘Those satin ones, I mean, with millions of bones and laces and things. Of course, nowadays one simply wears an elastic belt, if one wears anything at all, which generally one doesn’t.’

‘You’ll come to it, my girl,’ prophesied Mathilda.

‘When I was young,’ remarked Maud, ‘no one thought of not wearing corsets. It would have been quite unheard-of.’ 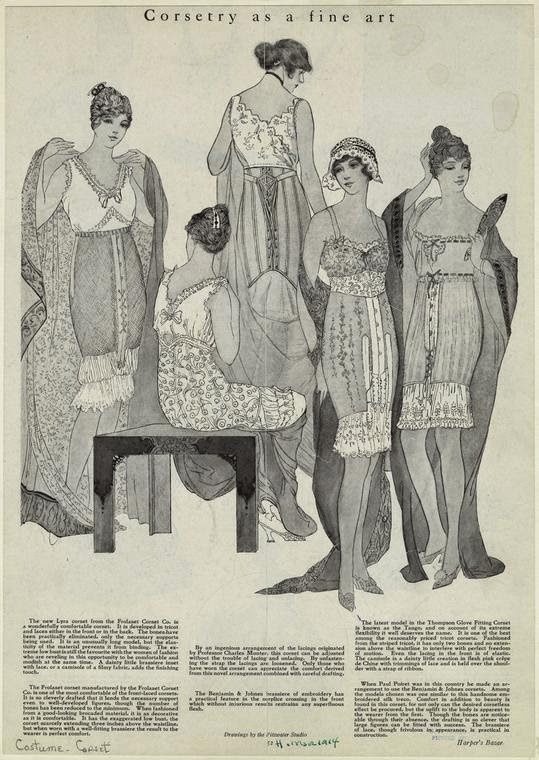 ‘You corseted your minds as well as your bodies,’ interpolated Paula scornfully. ‘Thank God I live in an untrammelled age!’

‘When I was young,’ exploded Nathaniel, ‘no decent woman would have mentioned such things in public!’

‘How quaint!’ said Valerie. ‘Stephen, darling, give me a cigarette!’

Roydon ignored this, and read aloud in an angry voice; ‘Lucetta May is discovered, seated before her dressing -table. She is wearing a shoddy pink négligée, which imperfectly conceals –’

‘It is grimy round the edge, and the lace is torn!’ said Roydon defiantly.

‘It’s surprising what a lot of dirt you can pick up from carpets, even where there’s a vacuum-cleaner, which I don’t suppose there would be in a place like that,’ said Maud. ‘I know those cheap theatrical lodging-houses, none better!’

observations: See earlier entry on this book for more about the plot and the Xmas setting.

The knockabout scene with the play-reading is completely hilarious: the playwright, Roydon, says:

‘If I’ve succeeded in making you think, I shall be satisfied.’

‘A noble ideal,’ commented Stephen. ‘But you shouldn’t say it as though you thought it unattainable. Not polite.’

Earlier two characters have been ‘drawn momentarily together by a bond of mutual misfortune’ just at the idea of a play-reading, and when Mathilda tries to explain that the old man doesn’t approve of his niece being on the stage at all, Roydon tells her of the big part:

After the murder, the Chief Constable makes his views clear:

There was a general sort of a row. Well, I’m a fair-minded man, and, after all, you can’t be surprised, can you? I mean, coming down to stay with a man, and then reading stuff aloud to him! Never heard of such a thing!

The general feeling is that play-reading is possibly worse than murder, and that the surprise is that the author wasn’t the victim.

A great achievement by Heyer is to make Maud – the lady who knows about dirt, above – completely thrilling. Everyone treats her as dim, and she is dull and lower class, (a great Heyer crime) – perhaps from the second line of the chorus. But we await her every entrance because she always gets great lines. She doesn’t think the murder should be investigated

‘as he is dead there is nothing to be done about it, and it will only create a great deal of unpleasantness to pry into the affair. Like Hamlet,’ she added. ‘Simply upsetting things.’


You want more of her: she is the best character in the book, and that is even more surprising when she is up against the wonderful Mrs Dean – see this entry - with her girlies and childies.

There’s a sudden venture into foreign affairs late in the book:

‘They do that kind of thing abroad,’ said the Sergeant. ‘Look at that King of Yugo-Slavia, for instance, at Marseilles ! Bad police-work.’

-- this is the assassination of King Alexander of Yugoslavia, and there are details of it in this blog entry on Matthew Sweet’s excellent book, The West End Front.