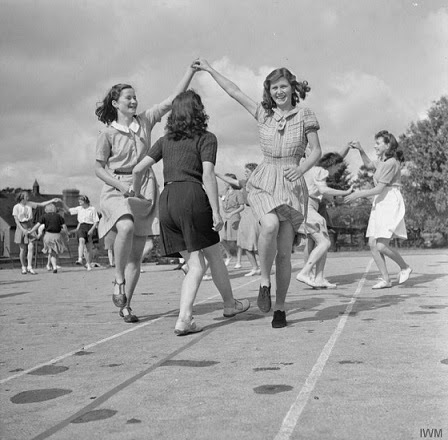 [Lucy Pym has been visiting a college for young women; it is the day when parents come for an exhibition demonstrating all their physical activities]

The guests moved out to the garden and the basket-chairs round the lawn. Lucy went with them…

The music began, and in front of the high screen of the rhododendron thicket appeared the bright colours of the Juniors’ folk dresses. Folk-dancing had begun. Lucy sat back and thought of Innes, and the way a black cloud of doubt and foreboding was making a mockery of the bright sunlight…

The programme consisted of the national and period dances beloved of all dancing mistresses, and they had been performed with conscientious accuracy that was admirable but not diverting. .. On the whole Lucy thought that it was that neither training nor temperament were sufficient. Their audience too lacked spontaneity; the eagerness with which they had watched the gymnastics was lacking. Perhaps they had had too much tea; or perhaps it was that the cinema had brought to their remotest doors a standard of achievement that made them critical. Anyhow their applause was polite rather than enthusiastic.


observations: This is a crime book of 1946 – my contribution to Rich Westwood’s Past Offences regular monthly meme. (See last month’s entry for more details and explanation.)

It must be 30 years since I first read Miss Pym Disposes, and I can still remember the utter shock the ending gave me. I wrote about that in a very early blog entry on this book – I said then:

Miss Pym Disposes is rather a sinister book, because it is set in such wholesome surroundings. Everything is too perfect, the girls are healthy and clean-living. Something is sure to go wrong, and it does. Many detective story fans have a real penchant for murder stories set in educational establishments, and this is a classic of the genre. The college is an all-female institution where women train, mostly, to be games mistresses at all-girls schools. It would make a wonderful film or TV programme, and it's surprising that it never seems to have been adapted for any other medium. The ending of the book (the very ending, the very last page) is shocking and discomfiting.

***** THERE WILL BE NO OUT-AND-OUT SPOILERS, BUT STOP READING IF YOU ARE PLANNING TO READ THE BOOK SOON *****


--- and it STILL is a startling ending, on what must be a 7th or 8th read, 30 years later. How I wish there had been the internet when I first read it – now, one would instantly go online to see what other people thought of it. I still haven’t read enough about it, and very much hope that some readers/fans will give their views on it below. Did Miss Pym do the right thing? What on earth will become of Innes and Nash? How could Miss Pym be so casual about it?

(I also had no idea what a Johannisberger, provided by Edward Adrian for Miss Lux, is – and did not find out until Google came along and told me that it is a South African German - see comments below - wine).

So how is it as a picture of 1946? Non-existent. In an entry on Jo Walton’s Farthing I mentioned a Tey-timing-problem regarding the same author’s Brat Farrar, and Miss Pym has the same issue – there is no mention of the war, and it is not clear whether it is set back in the 1930s, or around the time it was published – neither quite makes sense. I did not notice one thing in it that would key it to any date, though the lack of any mention of the war would place it firmly back in the 1930s.

But still a wonderful book, and one I confidently hope to read again.

The picture, from the ever-marvellous Imperial War Museum, shows young women on a course at Sidcot school doing European folk-dancing.