Dress Down Sunday: The Secret of Chimneys by Agatha Christie 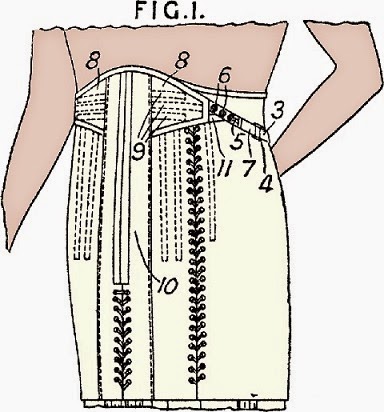 ‘Chilvers said you were going out.’

‘So I was – to Sloane Street. There’s a new place there where they’ve got a perfectly wonderful new hip band.’

‘I blush for you Virginia. You shouldn’t describe your underwear to a young man to whom you are not related. It isn’t delicate.’

‘But, Bill dear, there’s nothing indelicate about hips. We’ve all got hips – although we poor women are trying awfully hard to pretend we haven’t. This hip band is made of red rubber and comes to just above the knees, and it’s simply impossible to walk in it.’

‘Oh because it gives one such a noble feeling to suffer for one’s silhouette. But don’t let’s talk about my hip band. Give me George’s message.’ 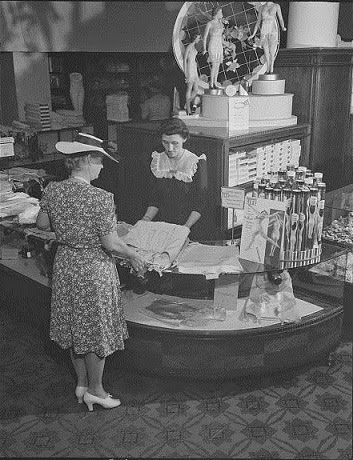 observations: Well, really, Bill is meant to be rather an ass, and Virginia to be the perfect woman, but I think Bill is in the right of it here – what a peculiar thing to be discussing.

The marvellous Vicki/ Skiourophile pointed this out to me in the comments on this recent corset entry and I was delighted by it.

Virginia is ‘tall and of an exquisite slimness’, so doesn’t really need a hip band – even in those days of flapper dresses and straight-up-and-down figures. I wondered at first if she was going for a slimming treatment – at one time (and perhaps now for all I know) you could go to have your flesh jiggled in an attempt to make yourself smaller, and this seems to have involved wrapping yourself up while in a machine. But close textual reading - eg the reference to walking – has led me to conclude that this was some kind of girdle. Why was it red? No idea.

Virginia’s hair ‘was of real bronze, with the greenish tint in its gold’ - the reference to green in her hair is repeated later on (‘the green gold of her hair’), so is deliberate, but it does sound weird - usually a greenish tint in hair is a sign that something has gone badly wrong with a dye-job.

As a crime novel, this is one of Christie’s light-hearted adventure thrillers, with far too much mixed in to the basic setting of an English country house weekend: a Balkan kingdom with a missing prince, oil concessions, blackmail, a Red Hand gang, lost jewels, secret documents in code, a master criminal. No Poirot or Marple – Superintendent Battle is overseeing the crimes.

It is readable, but somewhat tiresome, too frothy, and there is much too much in the way of racial slurs: the comments on Jews and dagos are hard to take.

Some of the characters from this one also appear in The Seven Dials Mystery in 1929 – which has an equally ridiculous plot but is much better than Chimneys. You can see Christie moving towards her glory days in the differences between the two books. Dumping the thriller elements was key.

Thanks again to Vicki, good friend to this blog. See here for a previous brilliant suggestion from her, Lucy Carmichael by Margaret Kennedy.

The first picture is a girdle from 1925. It is a patent application, with complex instructions:’ To prevent the protrusion of the stomach over the top of a low corset, tapered restraining flaps 8 are provided at the upper part, which flaps are fastened, as shown, to the central part 10 of corset. Tabs 3 attached to the side carrying hooks 5 capable of engaging holes 6. The straps 7 are attached to the flaps 8 as also are straps 11. Stiffeners 9 are provided on the flaps.’

The other picture, from the Library of Congress, shows someone buying one, but from much later, in the 1940s.
Agatha Christie corset dress down Sunday hip band Secret of Chimneys