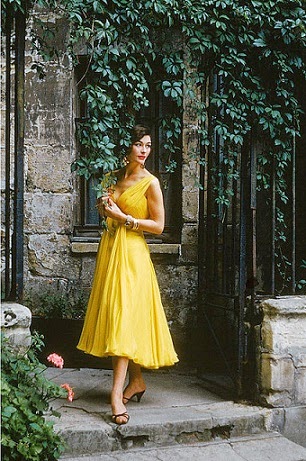 She was tall, especially in high-heeled shoes.The sleek black hair fell below her shoulders. Her eyes, which could be sly and dreaming or else full on you to express secrets while concealing them, were of a light hazel flecked with green where the light touched.

But Rose Lestrange was one of those women about whom you are less conscious of the face than of the figure. Slender, and yet rounded, the white skin of a rich dusky pallor, she wore a cotton dress of yellow, cut in a low V in front and stretching just below the knees. All her movements had that same sinuous grace; she seemed always in motion, deliberately calling attention to it.

observations: Rich Westwood has chosen the year 1958 for the September meme on his Past Offences blog. (See the fascinating previous roundups of entries: 1963 in June, 1939 in July, 1952 in August). And I’ve chosen John Dickson Carr again, as I did for 1939.

Carr – who also wrote as Carter Dickson - was American, but I haven’t before read a book of his set in the USA. He is famed for his locked room mysteries, and those rooms tend to be very European – panelled walls, gentlemen’s clubs, London atmosphere, and smoke and mist. So this is quite different: it’s a real campus murder, very much set in the USA – two characters met at a dance in a gymnasium, which you can’t somehow imagine in his English-set books. There are academics behaving badly, faculty wives, and a fair amount of illicit sex. The ghost of Wilkie Collins (constantly referred to as ‘fan-bearded’ and ‘fan-whiskered’, whatever that means) hovers over everything. It’s a goodish mystery, with a nice explanation for how the room was apparently locked from the inside…. Though the rest of the exposition isn’t so good.

In a recent review on her marvellous A Penguin a Week blog, Karyn Reeves asked a question about old murder stories where people are allowed to get away with it: ‘I always wonder, when I encounter this attitude in an old Penguin, if the misdemeanours and transgressions of the lower classes were viewed in quite the same way.’ (I covered the same book, JC Masterman’s Four Old Friends, on the blog here.) I can only recommend this book for her consideration.

As a 1958 book it has some interest – you would say that Carr was trying to keep up with the times, show modern life and young people, show, exactly, that he didn’t have to write about English country houses. I would class it as a good one, but not a great one - think I prefer his European works, though that may be just misplaced nostalgia on my part.

I had one funny experience while reading it: there was a section where several characters are wandering around in the dark, and one says:


‘It’s ten to one. You’re right. Miss Lestrange has probably taken a sleeping-pill.’

I was very puzzled by this because my impression was that it was more like 6am, so I re-read a whole section of the book to check on this, and indeed I seemed to be right. But then it turned out that I had misread the punctuation, and what the sentence actually said was

‘It’s ten to one you’re right. Miss Lestrange has probably taken a sleeping-pill.'

I feel Agatha Christie could have made a classic misdirection clue out of that one, like ‘I’ll see to her packing’ - someone half-asleep would overhear it, and use it as time/alibi evidence.

Various young women wander round in different-coloured dresses, which is moderately important, and another of them is in white and red, rather like the young lady from this entry on John Penn’s Mortal Term: 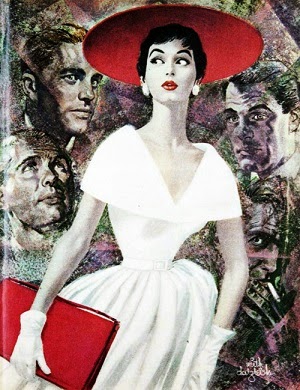 The top picture – from 1955 – is from Dovima is divine.
1958 John Dickson Carr Past Offences Rich Westwood yellow dress