Dress Down Sunday: The Witch of the Low Tide by John Dickson Carr 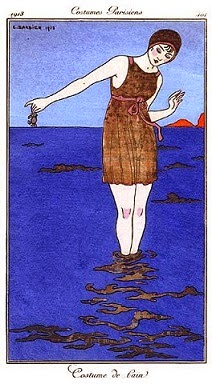 She wore the most modern bathing dress of 1907…
She lay face down on the floor in that other room. The pallid daylight fell faintly on her dark-brown bathing-costume, and on her bare thighs and legs, and on the canvas shoes that she always wore to swim. ..
Through his mind ran words Betty had read aloud to him, less than a week ago, from a so-called fashion hint in a magazine. 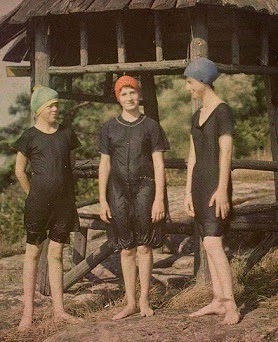 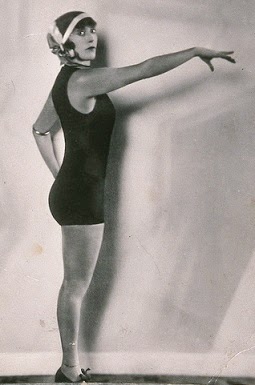 ‘“A discarded heavy wool-mohair skirt,”’ she had quoted,  ‘“can be made over into an excellent new bathing-costume.”’ And she had added,  ‘Ugh!’…
Garth looked at the wall opposite. From one of the hooks along this wall hung a long bathing-cape of brown serge with horizontal yellow stripes. It belonged to Betty, he knew, although she very seldom wore it. 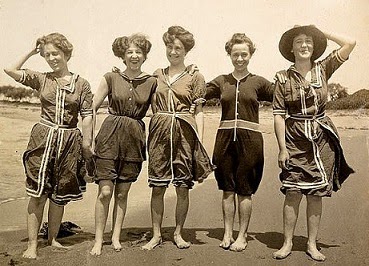 observations: This book is subtitled ‘An Edwardian melodrama’, and is part of a trilogy Carr wrote covering the first 90 years of the Metropolitan Police and Scotland Yard. He obviously researched these books very well, and went to a lot of trouble about – among many other aspects – the clothes. There were many items in the book I could have chosen to illustrate – Moulin Rouge, ladies’ daywear, men’s evening wear. (The Satanist group in Paris, though tempting, never really got going and he doesn’t tell us what they wore.) But the idea of turning your heavy woollen skirt into a bathing suit had to win out in the end. As he explains, bathing suits became a lot lighter at this time – and it is comment-worthy that Betty does not wear stockings to swim.

All this was to the good, and there is a hotchpotch of Freudianism, shilling shockers, the usual ‘impossible murder’, and dramatic tension-raisers such as authorial comments of (Look out! Look out!) interspersed in a tricky interrogation. I liked the character Marion, ‘in a pose he suspected of being imitated from Mrs Patrick Campbell on the stage.’

I have said before that JDC likes to create quite a sexy atmosphere, though true to his time he doesn’t go into too much detail, and in this book – can’t say too much – he ventures into some very difficult territory, with views that would not be popular today. (You might generously allow that he is trying to accept women as sexual beings.) There are shades of Ford Madox Ford’s The Good Soldier, of all unlikely books.

JDC is never less than a good read, though I think I prefer when he writes about his own time. And it was great fun finding pictures of the bathing costumes. These ones do not look as though they were made from old skirts, but that IS a useful fashion tip.

More discussion of beachwear in this entry and this one.

The (presumably) colorized photo is from George Eastman House.

The b/w photo is of ‘Australian swimmer and silent Hollywood film star Annette Kellerman’ in 1907, but it is recognized that this is quite a daring swimsuit for the time. It’s from the Australian National Maritime Museum.

The group of 5 women is from 1908 and is from the State Library of New South Wales.

The advertising illo is from later, 1913, and is from the collection of the University of Washington.