Dress Down Sunday: The Voice of the Corpse by Max Murray

Firth was propelling himself indolently to and fro on the swing seat of the lawn. Mrs Sim reclined in a deck chair reading. Celia was lying on her stomach on a rug plucking idly at blades of grass. The sight of her long shapely legs in very short shorts was to Firth satisfying and disturbing.

Without looking up she said to Firth: ‘So you’ve been boozing with the vicar?’

‘On the contrary, I’ve been sampling some of the best wine in the country.’

‘Bad,’ she answered. ‘Very bad. No young man should cultivate a taste that he cannot afford to gratify.’

‘I will be able to if I cultivate the vicar. He’s got plenty of wine.’

‘That’s right. Undignified, I agree, but look at the money I’ll save.’

observations: The young couple at the centre of this book engage in light conversation (if the word ‘banter’ hadn’t been downgraded recently I would have used it) throughout, but manage to do so – miraculously – without being annoying. I picked this one up having enjoyed The King and the Corpse recently, and I think The Voice of the Corpse is even better. It is a normal kind of village mystery: local busybody has been sending poison pen letters, and is found dead.

Firth Prentice is a solicitor down visiting the Sims family, and is thrust into the role of investigator. He doesn’t really want to do it (he says) but evidence is pushed into his reluctant hands all the time (mostly while he’s sitting on a gravestone); and when he does reach any conclusions along the way he reliably finds that dotty Mrs Sims knew it all ages ago, and half the village was ahead of him too. He is endearingly cross about all this.

In addition, everyone seems to agree that the victim is much better dead (in one case, a possible adequate motive was that she ‘wanted me to take part in one of her damned folk dance festivals’-like this one?) The village seems to be open to violence: there are two boys helping with the sleuthing (Murray is very good with children – a quite different pair of boys featured in the other book) and one says ‘My dad says Mr Millings has only got to say the word and he and some of the other men will throw Major Torrens in the duck pond.’

This is all mighty refreshing compared with much of the crime fiction of the era. There is some nice writing – a long lanky policeman ‘rose from the couch like an extension ladder’ – and lots of jokes, and it is very short. Well done all round, Max Murray.

On the clothes front, the victim has a penchant for spinning dogs’ hair into yarn and then knitting it into jerseys – yes, another motive for murdering her, and, happily, no picture could be found.

Celia, above, is described thus:


She liked the point-to-points in the winter at which it was not out of place to wear silk stockings, a coat and skirt, a mink coat and fur-lined ancient boots’.

Some of the rest of this para of description seems to be transferred to another character later in the book, but we’ll ignore that. This photo (from Dovima is Devine) is really far too smart , but is a similar idea: 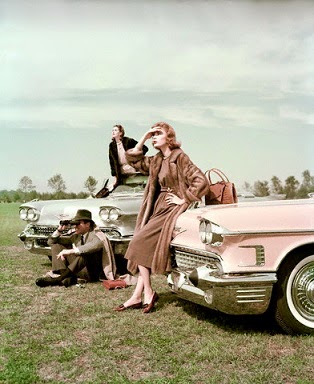 The sunbathing ladies are from the Library of Congress, and other sources. Another sunbathing lady in an academic setting here.
Max Murray point-to-point poison pen shorts sunbathing Voice of the Corpse