Dress Down Sunday: The Constant Nymph by Margaret Kennedy 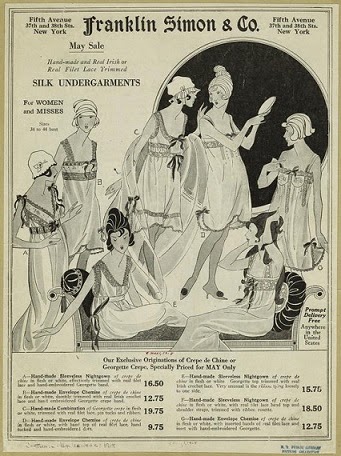 [Antonia is about to get married to Jacob, under the auspices of her cousin Florence. The engaged pair are discussing her trousseau]

She gave him the list, which began in her own childish scrawl and was finished in the neat scholarly script of Miss Churchill. He chuckled when he saw that his bride had intended to buy “six or seven hats, one gold evening dress with a train, and shoes with red heels”, but had overlooked the need for any underclothing. Florence had modified various items and added a detailed catalogue of lingerie.

“Is two dozen chemises enough?” he asked, planting a fat forefinger on the list. “When my sister married I remember hearing them speak of twelve dozen. You must have what is correct.”

“She says it’s enough for an English girl.”

“She should know,” he agreed.

And he continued to scrutinize the list, making very frank comments…

observations: This book came up in a recent entry on a different Margaret Kennedy book, Lucy Carmichael, when I said this:

The luscious Constant Nymph is a terrific melodrama with a rather uncomfortable plot involving an over-young woman and an older relation-by-marriage. Kennedy tilts the authorial scales so you can convince yourself that this – including breaking up a marriage – is all perfectly fine (the abandoned wife is treated most ruthlessly), although also tragically sad. It has been beloved by teenage girls and many others since it was first published in 1924, when it was a massive and rather risque bestseller.

The wonderful publishers Vintage have just produced a new edition of this favourite book, never out of print in 90 years, so it seemed a good moment to get it down from the shelf.

It is a great period piece and  extremely entertaining - and, the reader's attitude to it might change coming across it at different ages. Tessa is a young woman’s heroine: she is meant to be plain, and would make a good barmaid, and looks like Michelangelo’s Delphic Sibyl: 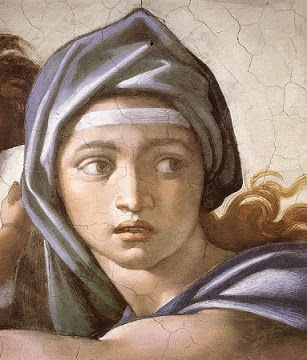 But she is that book-heroine-favourite: the right kind of person can see through to her inner wonderfulness, can see the point of her. In this case it is all the worthwhile men in the book, which gets a bit much,though there are moments when you can like her: ‘She looked at her diary as she said this, as if she admired her own language and would have liked to write it down.’

Tessa and her siblings, including Antonia, above, have been brought up in a Bohemian manner by their father, a great composer, wandering around Europe in some disarray. When he dies they are to be taken to England to go to school: their uncle describes what fun it will be and says their cousin Hilda, who is 17,

‘doesn’t want to leave school. She is captain of the school hockey.’

The four looked at each other, and though they were too courteous to say so they feared that their cousin Hilda must be a terrible simpleton.


The real problem is Lewis Dodd, the man for whose affections Florence and Tessa compete. In my page of notes on the book I have ‘Lewis is horrible’ and ‘Lewis is vile’ at regular intervals. He is meant to be a great composer, and worthy of their love, but he just comes over as unpleasant, selfish and stupid. Right at the end


- he is making a journey abroad with Tessa, who is 15, ill and penniless. He completely abandons her during their boat journey, and then gets on the train to Brussels without her – she only just catches up with him, and he says ‘What made you cut it so fine?’ In many readings of the book, I have never really noticed this before, caught up as I was in the romance and the drama. He really is quite dreadful.

The other huge problem is casual anti-Semitic remarks – very much of their time, but very hard for the modern reader. In fact the characters who despise Jews, such as Florence, are seen as snobbish and foolish: and one of the nicest men in the book (Jacob, above) is Jewish. But still it is seen as acceptable to make sweepingly rude generalizations about Jewish people.

The book is sad and funny, and Kennedy takes her strange characters seriously, which may be the secret of the book's abiding success.

The lingerie picture is from the New York Public Library.