Dress Down Sunday: Murder a la Mode by Patricia Moyes 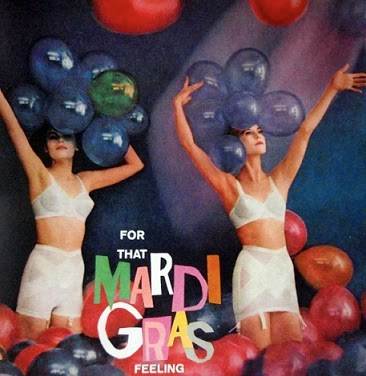 [Inspector Henry Tibbett is investigating a murder at a fashion magazine, and visits a fashion designer’s salon]

Here, a yard away from his startled nose were – as far as he could make out – about 120 exquisitely lovely girls, dressed only in the briefest of panties and bras. It was only when he caught sight of an infinite series of Nicholas Knights diminishing down apparently endless corridors into the distance that Henry realised that the effect had been caused by the placing of two huge mirrors in such a way as to reflect each other. There were, in fact, only three scantily-clad girls, but that was quite enough.

Nicholas Knight was engaged in draping a swathe of green satin round the slim hips of a fourth model – a brunette with a head like Nefertiti, who stood like a resigned statue, regarding her purple fingernails with more interest than pleasure. She too was was naked from the waist up, except for a scrap of white bra….

[Henry] was fascinated by the fact that the girls showed absolutely no self-consciousness at the arrival of a strange man.


observations: Another visit to this old-style crime story: murder at a magazine called Style (for which read Vogue), and a highly-convincing picture of life at such a publication, along with photo shoots, designer studios, and the more low-rent side of the fashion business. See the earlier entry for more about the plot, where the question is: who put the cyanide in the thermos flask of tea?

Moyes’ regular policeman, Inspector Henry Tibbett investigates with a heavy hand, and apparently an expression of permanent surprise on his face at the excesses and excitements of the fashion business. In fact our sleuth Henry a) doesn’t listen to somebody trying to give him vital info early on, and b) is shown as rather dim in his deductions, I think most experienced readers will be way ahead of him. But the book is still great fun. A young woman is described as wearing shoes with ‘those dagger heels and pointed toes.’ A secretary is dismissively described as ‘the siren of Surbiton’.

Fashion magazines, and indeed Vogue, also featured in blog favourite In the Mink by Anne Scott-James – click on the labels below to see several entries. The two books share a rather curious attitude to homosexuality in the fashion business – those expecting early tolerance in this industry will be sadly disappointed.

And the book covers similar ground (in a completely different era) to Margery Allingham’s Fashion in Shrouds – down to the disaster of two women in the same dress. One of the fashion shoots in the book has the model posed with a live cheetah – quite the trope at the time, and one we saw in this entry for Margery Sharp’s Something Light: 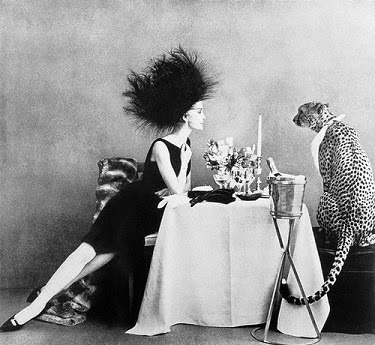 Girls in lingerie feature in the dress shop in the play Nine till Six – this entry, with some astonishing pictures: 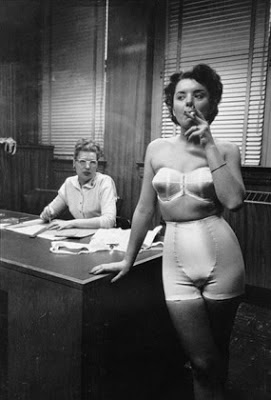