Posted by Clothes In Books on July 13, 2014
The Reader is Warned by Carter Dickson aka John Dickson Carr 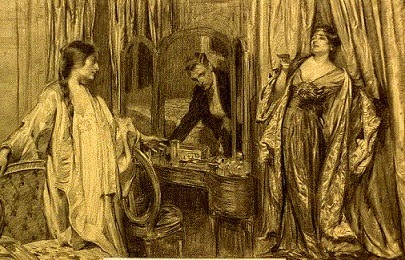 It was a woman’s bedroom or boudoir after the French fashion of the middle eighteenth century. The wall-panels were of silk, alternating in mirrors with gilt medallion-heads. The bed at their left, a sort of indoor tent, was draped and billowing from a gilded circle of wood in the ceiling…

The mist of unreality about that scene behind the gold gauze, the two electric candles throwing their light dimly on the silk wall-panels, the hush given to footsteps and even voices by very thick carpeting, all these things kept the brains of the watchers dulled like an opiate.

By moving his head sideways, Sanders could see her reflected in one of the long mirrors across the room. She was a small, plumpish, extremely good-looking blonde, with long ringlets which fell past her shoulders, large lips, and narrow twinkling eyes… She was wearing a heavy lace negligee which went went with her air of silk sleekness…

observations: Rich Westwood, Mr Past Offences himself, does a roundup each month on his blog of Classic Crime in the Blogosphere, a meme in which Clothes in Books is proud to make regular appearances. In June, he suggested that prospective participants do a 1963 book – see the fascinating results here. The July year (chosen by ME) is 1939. So this is my entry.

The book gets off to a stonking start – the usual odd collection of people are gathered in a country house, and one of them is a ‘mind reader’. As they make plans for a scratch meal, the mind reader says to one guest ‘I do not think that you will get any dinner… I do not think you will be alive.’ He sets the table for one fewer person than is in the house – and sure enough, by 8 o’clock there is a dead body on the landing. Excellent stuff. Lots of misdirection about the mind reader, who claims to be able to kill people via ‘Teleforce’ – kind of psychic waves. There’s a fascinating contemporary reference, given the date:

‘Well could you kill Hitler, for instance?’

All of a sudden it was like talking to the man in the moon. I asked him where he had been for the last five or six years. He said quite seriously, ‘In various parts of Asia, where we do not get much news.’

A chef’s hat crops up several times, and is referred to as a muffin-top hat – a change from the contemporary meaning of muffin top.

The book is dedicated to the author and playwright JB Priestley, and there is an extended reference to his play Dangerous Corner – which should be a clue, but didn’t help me much.

So all was going well. But then….

UNFORTUNATELY the solution and explanation involve (as something of a side-issue, this isn’t really a spoiler) some extremely racist views which will be abhorrent to most modern readers. It seems likely Carter Dickson was merely reflecting the society around him, and playing with ideas for clues and crimes, but it really messes up this book, and for that reason I can’t recommend it – except perhaps as a sociological document showing views of the time.