Posted by Clothes In Books on July 04, 2014
the story: Hapworth 16, 1924 from the uncollected short stories of JD Salinger


First published in the New Yorker 1965, and in an unofficial collection 1974 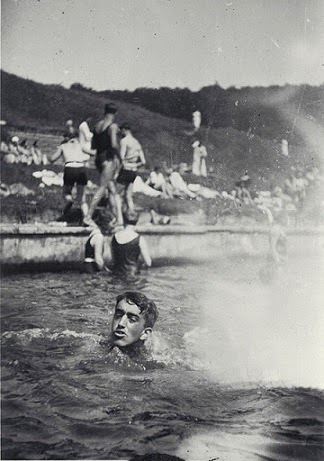 [Seymour Glass is writing home to his parents from summer camp]

I was quietly swimming in the lake during Aquatics Period, quite without a thought in my head, merely re-calling sympathetically to myself the pleasant passion of Miss Constable, at the main library, for the great Goethe’s works in full. At this quiet moment, a thought occurred to me which raised my eyebrows unmercifully! It was suddenly borne in upon me, utterly beyond dispute, that I love Sir Arthur Conan Doyle but do not love the great Goethe! As I darted idly through the water, it became crystal clear that it is far from an established fact that I am even demonstrably fond of the great Goethe, in my heart, while my love for Sir Arthur Conan Doyle, via his contributions, is an absolute certainty! I have rarely ever had a more revealing incident in any body of water.

observations: This story came up in discussing Joanna Rakoff’s My Salinger Year a few days ago. It’s a long story which was published in the New Yorker in 1965, and is available to subscribers in their archives but not – officially – anywhere else. In fact you can find it on the internet if you try hard enough, and some of us have a pirated two-volume collection of Salinger stories – this appeared briefly in the 1970s before the Salinger litigation machine put a stop to it.

Some of the uncollected stories are good, some of them are wonderful, and several of them are fascinating for showing the early versions of Catcher in the Rye.

Hapworth 16 is terrible: pretentious, unbelievable, annoying. Seymour Glass, aged 7, is writing home from summer camp. He is droning on in his clever way about the family, and about which classic books – Tolstoy, but not the Kreutzer Sonata because he has already read it; de Maupassant in French - he wants sent to him. It is true that he comes over as hateable, but more to the point it is completely unconvincing, even for a genius like the oldest Glass child, and it is cringe-making. If you ever thought that that line from Salinger’s Zooey: ‘the Great Gatsby… was my Tom Sawyer when I was twelve’ was off-putting and pretentious, then don’t go near Hapworth 16.

As far as we can tell, the reclusive Salinger was very proud of it, but it’s hard to find anyone else who likes it. I feel the paragraph above (written in the voice of a 7-year-old, remember) will give you a fair idea of whether you would enjoy it.

But still, Salinger is one of America's finest writers, so a good choice for Independence Day, 4th July.