Dress Down Sunday: The Third Man by Graham Greene 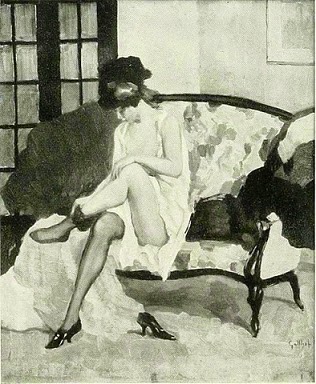 There is a lot of comedy in these situations if you are not directly concerned. You need a background of Central European terror, of a father who belonged to a losing side, of house-searches and disappearances, before the fear outweighs the comedy. The Russian, you see, refused to leave the room while Anna dressed: the Englishman refused to remain in the room: the American wouldn’t leave a girl unprotected with a Russian soldier, and the Frenchman – well, I think the Frenchman must have thought it was fun. Can’t you imagine the scene? The Russian was just doing his duty and watched the girl all the time, without a flicker of sexual interest; the American stood with his back chivalrously turned, but aware, I am sure, of every movement; the Frenchman smoked his cigarette and watched with detached amusement the reflection of the girl dressing in the mirror of the wardrobe; and the Englishman stood in the passage wondering what to do next.

I don’t want you to think the English policeman came too badly out of the affair. In the passage, undistracted by chivalry, he had time to think, and his thoughts led him to the telephone in the next flat.

observations: In a recent Guardian piece on character names, I discussed the main character of this novella, Rollo Martins, whose name was changed to Holly (or Holley, according to Greene) for the noted 1949 film. I described him as a tough guy, and a comment on the piece argued with that. But I think that, although he is a figure of fun, and comes over as rather foolish, he does have pretensions to being a tough guy, and is described as ‘Drinks too much and may cause a little trouble.’ He is attractive to women, and – it turns out – handy with a gun. It would be more reasonable to object to my comments on his name: Graham Greene wanted him to have an absurd name, so perhaps it was not my business to complain.

The novella itself – a form of novelization of the film screenplay – is a short, rattling good read, and of particular interest when compared with the film. There are a few marked differences: in particular a very different ending. The last few minutes of the film are legendary, and still heart-stopping, and pretty much everyone agrees, including Greene, that this is a better ending than the story. Greene thought it wouldn’t work – his preface to the book is full of such fascinating facts, concerning a film that is mythical already, with the Orson Welles connection (he appears on screen for a very short time, but is wholly charismatic, you can’t take your eyes off him for every second he’s there) and the various rumours about the writing and direction.

As a thriller The Third Man is excellent, and also as a work of literary fiction. Greene was such a good writer:

We never get accustomed to being less important to other people than they are to us.

[He] walked up and down underneath the little windows. He felt, he said, rather like a Romeo who wasn’t sure of Juliet’s balcony.

[At the hilarious literary talk] A number of names were simultaneously flung at Martins – little sharp pointed names like Stein, round pebbles like Woolf.

Great lines, and all relevant to the tight story. And the film is still well worth watching too.

Film and book both mention a black market in the artificial sweetener saccharine – this is something that crops up in Patrick Leigh Fermor’s A Time of Gifts, and is still rather hard to imagine.

For more Graham Greene on the blog, click on the label below.