[Lucy, narrating, is working in the drama department at an arts institute: Lady Frances is the patron. Her new friend is Ianthe.]

Since then she has rather attached herself to me, and I can’t help liking it, for she is amusing in a breathless, scatty sort of way. She is rather like something out of a Marx Bros, picture. She is a very good mimic; she can imitate anybody’s voice. I was on a ladder on the stage, fixing some lights, when the voice of Lady Frances rose up from the dark stalls. 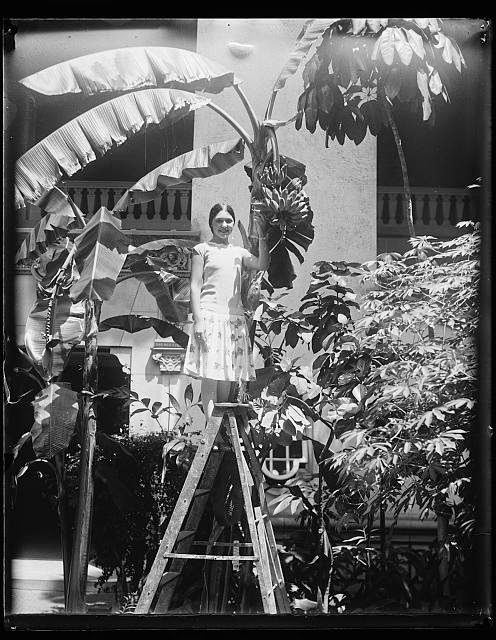 “Miss Carmichael! I can see right up your legs! Go home and put on sensible knickers.” I was furious. I quite thought it was Lady Frances and was just about to hand in my notice.

observations: As I said before, there are all kinds of incidental joys in this book, and this fairly irrelevant but hilarious story is one of them.

And then later on, one of Lady Frances’s daughters sits on a sofa in a hotel, and our heroine girls can see she is wearing woollen knickers. The sofas may be low, but:

“You and I can sit on them without making poppy-shows of ourselves, and we’re only poor middle-class girls. Think of all the advantages she’s had!”

Poppy-shows, apparently, are puppetshows or peepshows, and the phrase means to make a spectacle of oneself. According to Eric Partridge in his Dictionary of Slang, it specifically means women accidentally showing their underwear. But it is used in simpler circumstances - DH Lawrence uses it about a bouquet.

More language news: ‘to give someone a set down’ is a phrase used in Georgette Heyer’s Regency romances and not much anywhere else – it means to make a crushing retort. In this book we find that the plural of set down is sets down.

I also like Lucy’s forthright answer to a miserable young man, something I’ve often longed to say:

“I’ve lost my religious faith,” he declared. “That’s a simply frightful thing to happen to me just now.”

“But you always knew He allowed other people to be unhappy,” Lucy pointed out. “And that never worried you.”

And about committee meetings:

But if every Treasurer’s report which Garstang had heard read out in that Council room had been superimposed and photographed, he did not believe it would be blurred, and nobody seemed to be taking it much to heart.

And there is also excellent, non-medical, advice if you are trying to get pregnant: don’t bother with doctors:

If I was a girl I’d remember that the watched pot never boils, and put myself down to ride in a gymkhana at Easter — sort of thing it’s going to be a nuisance to have to cancel.

The incidentals in the book make it well worth reading, and the descriptions of clothes are splendid - see earlier entry. And thanks again to @skiorouphile for telling me about the book.

The woman up a ladder is from the Library of Congress.
ladder Lucy Carmichael Margaret Kennedy sensible knickers