Devil at Westease by Vita Sackville-West 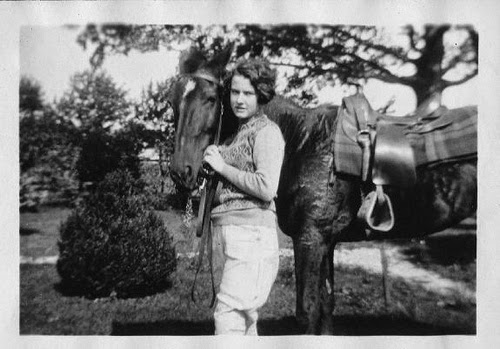 [The narrator is visiting a country village]

The landlord came out with me to give me directions, and as we stood together in the sunny street where the Jaguar patiently and incongruously waited, a girl came along riding on a sleek pony. Bareheaded, with short dark curls, a yellow jersey clipping her slim figure, well-cut jodhpurs encasing her long slim legs, she rode with a careless grace, long stirrups, and an easy rein. On seeing the landlord, she stopped. 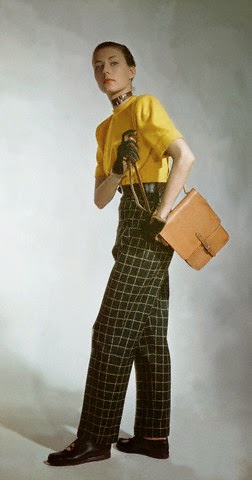 “Morning, Mr Sivewright,” she called out. “I’ll be coming down presently with the trap to fetch Fathers’s beer.” Then she looked at me, the stranger. “Is that your car?” she said, pointing at the Jaguar with her whip.

I was a little surprised, since the English, although a most individualistic and even eccentric race when you get to know them, are superficially conventional about such things as taking the initiative without an introduction. 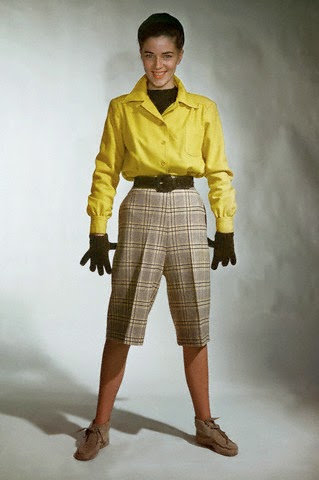 observations: Various surprises here. Vita Sackville-West, a fairly iconic figure of the first half of the 20th century, wrote a lot (see here, or click on the label below, for blog entries on her books or about her, or about Violet Trefusis) but until I read this I had no idea the oeuvre included a straightforward murder story – thanks to Kate Walker, who also suggested The Agony Column. As a 1947 murder story goes, it is quite clever, but at the same time strangely conventional and pedestrian – I was expecting something more – what? Theatrical? Metaphysical? Poetical? It is none of those things, and if I’d read it blind I would never in a million years have guessed who wrote it.

The narrator, Roger Liddiard, is revealed casually on p57 to be Sir Roger: the policeman is about to ask if he wouldn’t mind ‘stepping round [great Golden Age phrase of motion] to the Manor House’ to inspect the body. Vita S-W was truly a most tremendous snob – even her friends and defenders don’t argue with that. The book is quite like the recent ones I have read by Thurman Warriner, of a similar era, here and here, and goodness knows I didn’t ever think I’d be looking back nostalgically on them for their egalitarian socialism, but VS-W would have benefited a lot from the introduction of a spiv and his moll – extra investigators in the Warriner books.

Late on a character says to the hero: ‘there’s a streak of grudging ungraciousness in you, Liddiard, which I have often deplored.’ Perhaps one is not meant to take this character’s comments entirely seriously, but I felt like applauding.

The woman with the horse is from the Helen Richey collection at the San Diego Aviation archives, a fruitful source of wonderful photos for the blog. This one is plainly the same woman as above, though not actually Helen Richey I think.

The other two women, in trousers and yellow tops, are from the Dovima is Devine photostream, and for sure Mary looks a lot more like the San Diego woman (horsey Englishwomen don’t do Vogue), but I couldn’t resist the pictures.

I’m sure they have never lived in the same sentence before, but Enid Blyton, like Vita Sackville-West, always puts people into yellow jerseys if they are going riding – was there a secret dress code?