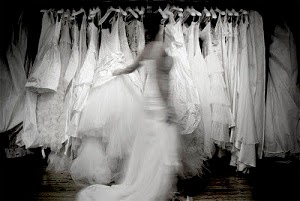 One of the original inspirations for this blog was Jassy in The Pursuit of Love worrying about her sister’s wedding-dress, short ‘as was the hideous fashion’ - she is concerned that Louisa will be buried in her dress, and the undertakers will have to look at her ‘poor old dead legs.’ So we’ve always taken our wedding dresses seriously. 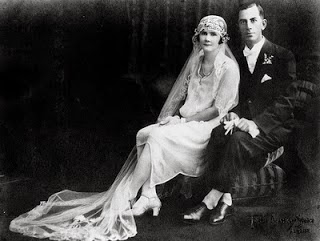 Today’s entry appears on the Guardian Books Blog, and looks at weddings, and the all-important dresses, in literature down the ages. It could be Clothes in Books’ specialist subject on Mastermind: click on any of the wedding-related labels below and you will find a fine array of brides in books. Beautiful dresses and bad outfits, weddings in Japan and in the USA, weddings involving real people (JFK) and double-imaginary (in Ulysses), civil ceremonies and wartime weddings, and the intriguing case of the duplicate wedding dress (thanks again Audrey). There are trousseaux, and racy ideas for wedding lingerie.

This is my favourite of all the dresses ever featured: 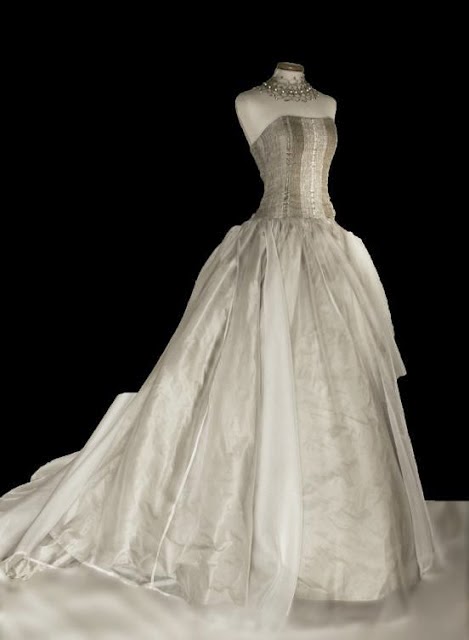 ...and here is part of the blogpost:


In Samuel Richardson’s early novel Pamela (1740) the heroine holds out for marriage and gets it (against considerable odds, like some early Bridget Jones), but she seems to get married, rather surprisingly, in ‘a rich white satin night-gown, that had been my good lady's, and my best head-clothes’, so that the servants won’t guess what’s going on.

Jane Austen’s books all end in weddings, but there is very little detail of the ceremonies, apart from Mrs Elton’s bitchy description of Emma’s nuptials as being shabby and inferior to her own: ‘very little white satin, very few lace veils; a most pitiful business!’ Mrs Bennett in Pride & Prejudice suggests that Lydia should not wait to have her wedding clothes (whole trousseau rather than just gown) made, but should get on with getting married – well, yes, she’s living in sin, on the edge of social doom.

Is the most famous wedding in literature the one that doesn’t take place? Jane Eyre is set to marry Mr Rochester wearing pearl-grey silk – she has insisted on plainness, but as an alternative to bright colours, not to white. He gives her a beautiful, elaborate veil, but that is destroyed by the woman from the attic. We all know this story all too well, but the scene where Bertha comes and tries on the veil is bone-chilling – the more so because we feel such pity for her, though no-one in the book seems to.

At the beginning of Mrs Gaskell’s North and South (1854-55), Margaret Hale helps with the preparations for her cousin’s wedding – as a guest she wears white satin, which 100 years later would have been very bad form. She also has some modern-sounding views: fed up with all the jobs for the girlish Bridezilla Edith, she says her own choice would be ‘to walk to church through the shade of trees; and not to have so many bridesmaids, and to have no wedding-breakfast’.

In the 19th century a new dress might be obtained for the wedding, but it is not necessarily white, and it will be used again - and plenty of women just wore their best dress, perhaps with a veil. The tradition for white seems to have started with the weddings of Queen Victoria and then her daughters, but took a long time to catch on. The one-off wedding dress is a 20th century invention, and even then, as you can find in Nancy Mitford and Somerset Maugham, a new bride was expected to wear her wedding-dress to her first dinner-parties.

The main complaint from readers of the piece was that there was no Miss Havisham – too sad, I thought. But there must be plenty of fictional weddings not yet covered on the blog, and I look forward to many more entries, and some same-sex weddings in books.

Some of our best wedding photos have come from Perry Photography, including two of those above, and they are used with her kind permission: you can see more of her pictures at Flickr, or at her website weddingsinitalytuscany. Her wonderful photos have featured on the blog many times before.