Dress Down Sunday: Wildfire at Midnight by Mary Stewart 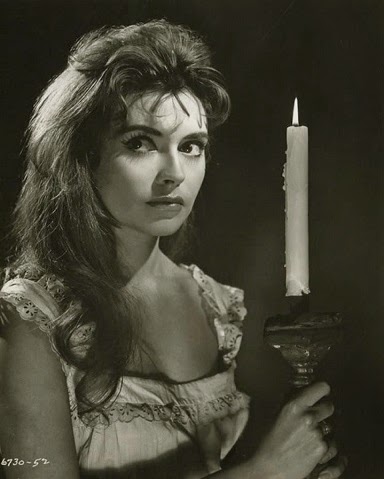 It was precisely one-forty-eight am when I decided that I was not going to be able to sleep, and sat up in bed, groping for the light-switch… Then I remembered that the hotel made its own electricity, and that this was turned off at midnight. There had been a candle-stick, I recollected… my hand groped and found it. I struck a match and lit the candle.

[she realizes that she has left her handbag, and headache pills, downstairs in the lounge of the hotel]

I got out of bed, and grabbed my housecoat… thrusting my feet into my slippers and knotting the girdle of my housecoat tightly round me.

I seized my candle, unlocked my door, and set off.

And at once I saw that this was not to be, after all, the classic walk through the murder-haunted house, for, although the corridor lights were of course unlit, the glimmer from the eastern windows was quite sufficient to show me my way. I went softly along the main corridor, shielding my candle, until I reached the stairhead. 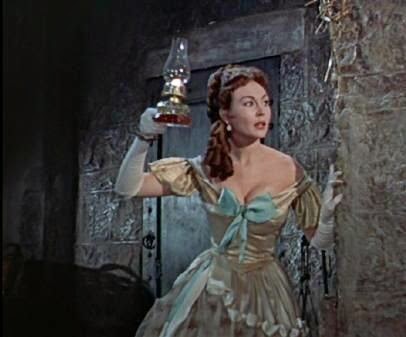 observations: The scene above, as Mary Stewart makes clear, is meant as a homage/ironical take on the traditional scene in the old dark haunted house. Stewart’s heroines, as pointed out before, are no clinging vines and don’t need looking after by men. The lady can take care of herself, thank you.

In the 1950s in even a quite posh hotel you would be expecting to share a bathroom – this is why characters in books mysteriously nearly always have a dressing-gown or housecoat with them when they go away, whereas most people probably don’t these days.

Mary Stewart died this month, and there was a blog entry then on her Arthurian cycle, the Crystal Cave trilogy. We also mentioned her romantic suspense novels, with a nod to their proto-feminism. This is not one of her best-known examples, but has a nice period feel: ‘Gianetta is hoping for a tranquil interlude on the Isle of Skye’ it says on the back cover – yeah, right. There will be danger, adventure and romance. Also quite a lot of mountain-climbing – this book has a very specific time frame, beginning just days before the Coronation of Queen Elizabeth II in 1953, and so also matching up with the first conquest of Everest. In fact Gianetta is disappointed about that:

I’d always imagined it as the last inviolate spot that arrogant man hadn’t smeared himself over, sort of remote and white and unattainable. Immaculate, that’s the word I want. I somehow think it would be a pity to see man’s footmarks in the snow.

There is a character who writes travel books called Sauntering in Somerset and Wandering Through Wales – rather like Gilderoy Lockhart in the Harry Potter books who has written Travels with Trolls, Wanderings with Werewolves and Gadding with Ghouls.

I wondered irritably why married women so often adopted that tone, almost, of superior satisfaction in the things they had to suffer… I thought wryly that nobody ever wanted advice anyway: all that most people sought was ratification of their own views.

They are very much books of their time, but still rattling good reads.

With thanks to Colm Redmond, the guest blogger, for finding the pictures. His recent post on Inspector Montalbano used a similar image. Top picture is Yvonne Monlaur in The Brides of Dracula, 1960. The second one is Hazel Court in The Curse of Frankenstein, 1957.  As can be seen, the ladies choose immensely practical clothes for wandering round in the dark.
Colm Redmond coronation dressing gown Everest guest blogger housecoat Mary Stewart Skye Wildfire at Midnight