Dress Down Sunday: The Railway Children by E Nesbit 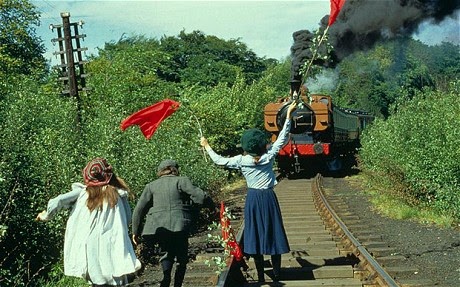 "If we only had something red," Peter repeated, "we could go round the corner and wave to the train." …

Phyllis was red-faced and damp with anxiety. "Oh, how hot I am!" she said; "and I thought it was going to be cold; I wish we hadn't put on our—" she stopped short, and then ended in quite a different tone—" our flannel petticoats."

Bobbie turned at the bottom of the stairs. "Oh, yes," she cried; "THEY'RE red! Let's take them off." They did, and with the petticoats rolled up under their arms, ran along the railway…

"You're not"— Phyllis faltered—" you're not going to TEAR them?"

"Oh, yes," said Bobbie, "tear them into little bits if you like. Don't you see, Phil, if we can't stop the train, there'll be a real live accident, with people KILLED. Oh, horrible! Here, Peter, you'll never tear it through the band!" She took the red flannel petticoat from him and tore it off an inch from the band. Then she tore the other in the same way.

observations: I mentioned this scene in a recent Guardian books blog piece as a disappointment for men of a certain age: “they have a complete conviction that in E Nesbit's The Railway Children, the girls Bobby and Phyllis take off their bloomers and wave them at the train to save it from disaster. But the truth is that in the book, as with Jenny Agutter and Sally Thomsett in that 1970 film, it is their red flannel petticoats they use. Sorry.”

But that doesn’t make the film, or the book, any less iconic. And if you can stay dry-eyed during the final scene where Bobby shouts out ‘Daddy! That’s my Daddy!’ then you must have a heart of stone. There was another TV adaptation in 2000, in which Jenny Agutter moved on to play the mother and Jemima Rooper took her role of Bobby – this was very good too, or perhaps the story is just failsafe.

The incident with the train and the petticoats is by no means the climax of the book, although it is often described as such. It is one of a number of linked adventures the children have, and there is a lot to come afterwards.

The story is very much of its time (I was surprised to find the word ‘snarky’ in it): a lot of it is about feelings and etiquette and honour and class distinctions, which should sit strangely with the adventures and the penny-pinching, but strangely works out mostly fine, with a bit of a blind eye to some references. It is sentimental to modern tastes, but seen as a historical artefact it is enchanting. 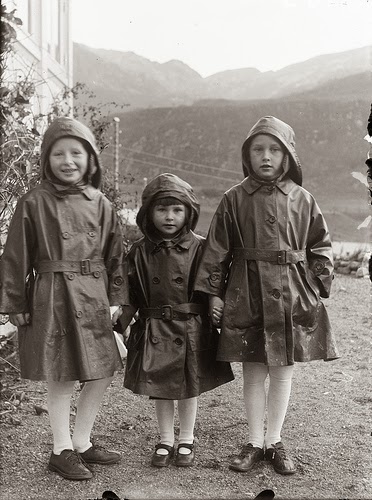 The children are very glad they were given new waterproofs before they moved to the cottage in the country – I found this picture, which shows 3 girls rather than 2 girls and a boy, but it is too delightful not to use on such pedantic grounds.

E Nesbit's Five Children and It has featured on the blog, twice (and with petticoats featuring again), along with Jacqueline Wilson's updating of it.