Dress Down Sunday: Green for Danger by Christianna Brand

[There’s an air raid at the hospital]

‘I suppose Woody and I will have to plunge down to that mouldy shelter. The one and only advantage of night duty is that you can stay above ground. Do you think we dare just go to bed and see if we can get away with it?’

‘My dear, last time Joan Pierson and Hibbert did that, the Commandant routed them out and drove them down to the shelter just as they were, and now everybody knows that Hibbert goes to bed in her vest and knickers.’

‘Well we don’t go to bed in our vests and knickers. Com’s welcome to drive me forth in my Jaeger pyjamas.’…

[Later] Cockie [stood] in the narrow doorway, politely averting his eyes from a line of solid-looking underwear hanging across the little kitchen…

Woody dived under the line of washing, holding up a garment for the Inspector to follow her. ‘Excuse the Jaeger coms and things, but chiffon and crepe de chine don’t quite suit the life of a VAD…’ 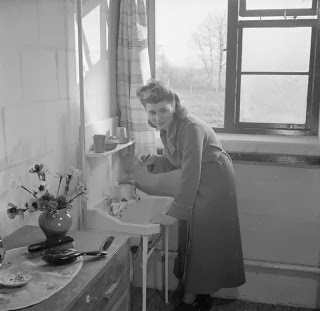 ***For a discussion on what you might understand by ‘vest and knickers’ be sure to see this entry.***


observations: It’s hard to say which is better – this book or the marvellous black and white film made from it in 1946, which apparently was too terrifying to be shown in any medical situation – ‘banned from hospitals’ makes a change in the annals of censorship.

The book creates an extraordinarily convincing atmosphere of the second world war – the hospital, the blitz, the regular medical staff and the volunteers. It is set in a hospital in Kent (ie not far from London): a harmless old man dies in the operating theatre – but why on earth would anyone want to kill him? Life goes on, and there is a ghastly party night for the staff. A second murder removes all doubts, and then it turns out that the main characters we have been following all have their motives. Days pass, and the suspects (all those who were near the theatre on the day in question) are stuffed in together (no-one else in the hospital wants to be around them) waiting for something to happen. The final denoument is wholly surprising, and brilliantly done.

In the meantime, of course, they have all been chatting, being witty, starting and finishing love affairs, and being snobbish about everyone else. The three main women share a cottage on their own to avoid being with the lower-class women, as above. There is some funny business with the shillings for the gas meter – what a gift that system was to UK murder story writers of the era – and the revelation that the medical staff all carried small quantities of morphine around in their gasmask holder, just in case they were ever trapped in a bombed building.

The picture is of utility underwear of the time – it was produced by the Ministry of Information and is now in the collection of the Imperial War Museum. The second picture, also from the IWM collection, is of a hostel for war workers – the toothbrusher lives in a hostel with other similarly-placed young women, very much like the women in this book.