New Year’s Day: The Case of the Four Friends by JC Masterman 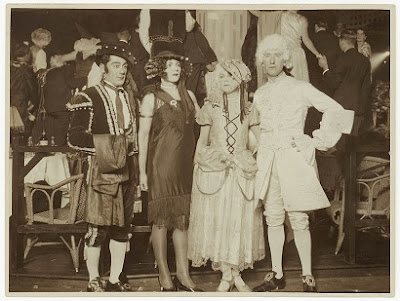 ‘I suppose’ he said, ‘that we’re conforming to convention and turning out for this fancy-dress ball to see the New Year in. It’s a confounded bore, but I like to do what’s expected of me…. Personally, I’m going as Metternich, it’s a fine court dress of that period, and I don’t really believe that any dress which dates from after the 1848 revolution is quite worthy of a gentleman. What are the rest of you doing?’

‘I’ve got an 18th century dress,’ said Gradon… ‘that ought to satisfy your aristocratic requirements.’

Bannister laughed. ‘Then I’m afraid that I shall pull the party down in the social scale, for I’m going as a Neapolitan peasant. What about you, Toby?’

I’m afraid I’m just as far down the scale as you are… sometimes the girls are just as fond of dancing with a pierrot as with an 18th century rake.’


A HAPPY NEW YEAR TO ALL CLOTHES IN BOOKS READERS


The key action of the book takes place at and after the New Year’s Eve ball, and the author has a character explain why the aftermath of the drunken celebration is the ideal setting for any number of crimes, up to and including a murder:

Is that shape in the corner of the Moroccan bar a Barbary pirate of is it Henry VIII? Is that not an inebriated Charles II trying door after door? And what is that – that dim shadow that seemed to flit down the corridor? Was it only a figment of the imagination or was it Harlequin… searching for the room of Columbine, or Mary Queen of Scots? Yes, if you have ever been the last survivor of a fancy dress ball you will have some conception of the meaning of the word chaos.


Clothes in Books does always love a fancy dress party in a book, and this is an excellent explanation of why.

Although this is rather a stiff and formal mystery, not a great lost masterpiece, it has its moments, like those above. Masterman was Provost of Worcester College Oxford and Vice-Chancellor of the University, and in the tradition of Dons’ Delights he wrote a couple of murder mysteries. This one is very schematic, and a modern reader probably doesn’t have much trouble working out what is going on, and is waiting for the characters to catch up. But there is the usual sociological interest – a solicitor is being blackmailed: the reader is wondering exactly what for, and assumes it will be left vauge, but another character says straight out that it must be for homosexual activities. Foreigners – particularly Huns – are automatically objects of suspicion (though there is an odd bit where it is seen as a sign of innocence that a German character ‘was most interested in our burglar alarm’ at the hotel.)

Later on there is a mixed-up reference to ‘flash ons’ – he speaks of novels where you find out what happens to the characters later, but in fact seems to be talking about what we would call flashbacks. These unworldly dons…

The book is somewhat reminiscent of Agatha Christie’s Cards on the Table, and none of the characters are particularly nice or attractive. The story starts in an academic setting, but isn’t really going to satisfy people looking for an academic mystery…. But it’s entertaining enough. And whatever went on at your New Year’s Eve party, you can be sure it wasn’t as awful as this one. There is a mention of the house detective at the hotel – long a feature of books (and perhaps of real life), it’s not something we hear of any more, and not a role it is easy to imagine in today’s hotels.

We have seen Lord Peter Wimsey dressed as one perceptive commentator put it ‘in a harlequin onesie’, and there were charming pierrots here. For a fine selection of fancy dress entries, click on the label below.

The picture of a fancy-dress ball is from Sam Hood’s collection at the State Library of New South Wales.