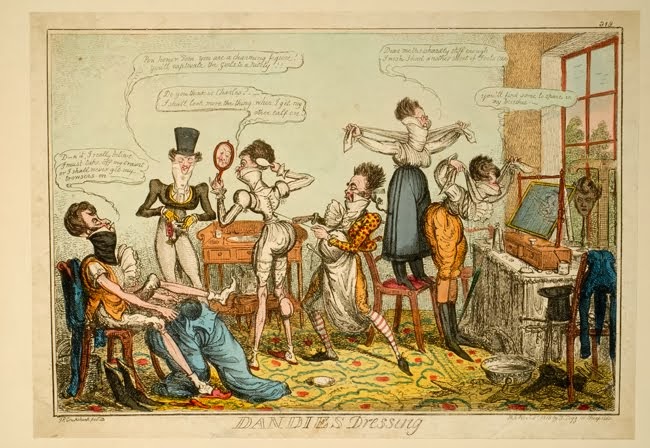 Young Mr Carrington, a very dashing blade, was indeed wearing a startling habit, and the fact that he had the height and the figure to adopt any extravagant mode without appearing grotesque did nothing to recommend the style he had chosen to adopt to his elder brother. He was a goodlooking young man, full of effervescent liveliness, and as ready to laugh at himself as his fellow-men. His eyes laughed now, as he said solemnly: ‘This, Des, is the highest kick of fashion, as you would know if you were as dapper-dog as you think you are!’ He thrust one foot forward as he spoke, and indicated with a sweep of his hand the voluminous garments which clothed his nether limbs. ‘The Petersham trousers, my boy!’

observations: So apparently they look like Cossack trousers, and are later described in the book as ‘preposterous’ garments. Lord Petersham was a fashion trend-setter of the time – which is the Regency, and perhaps around 1815. In the picture above, you need to look for the dandy who is standing on the chair - he is apparently wearing Petersham trousers.

This is one of Heyer’s later books, and perhaps not one of her best. The plot is wildly over-complicated, with all kinds of unnecessary characters who disappear unsatisfactorily, and a chain of information resolved into this kind of thing: Lord and Lady Wroxton call on Hetta to tell her that they have received a letter from Lady Emborough, which explains that she has had a call from Lady Bugle, who wants to know what has become of Cherry. It is exhausting to keep up with, and not really necessary. And there is a massive plot-hole: the gallant Desford goes careering round the country looking for someone to take in the charity girl, travelling for days to Harrogate, but it is mentioned several times that she has an uncle with family of his own living nearby – why on earth does he not take her there?

Heyer’s best books – and they really are good, light entertainment at its very finest – can be read over and over. But a lesser one like this shows up the problems: too many sentences like this one:


‘Her eyes twinkled mischievously; she said, on a choke of laughter: ‘No, no!’

And the endless use of her research – Heyer seems to have swallowed whole the Dictionary of the Vulgar Tongue first published in 1811, and (for example) the hero and his father discuss which clubs the son does not go to, obviously solely for the purposes of showing off. It is also a truism that Jane Austen, writing roughly at the time Heyer writes about, has barely a word in her entire oeuvre that isn’t straightforward and comprehensible. Every page of Heyer is full of kennel-raking and knocker-faced and spoon to the wall and butter-prints and jobations and rhubarb in the port. In this particular book a young man says ‘Anyone would think I’d tried to rape the girl!’ which I think is fairly rare in Heyer – there is often an undercurrent of the dangers of seduction and the dark side of what can happen to an unprotected female, but rape isn’t often mentioned as such.

But – all is forgiven for the good ones, the books which have been amusing and entertaining many of us since we were in secondary school, and which work for the times when only something very light and easy will do. Everyone’s favourites probably differ, but Black Sheep, The Unknown Ajax ** and The Corinthian will do it for me. And These Old Shades for the most outrageous, un-PC romance of them all – ‘Oh Monseigneur!’
**corrected, thanks to a helpful comment below.

The picture of Dandies Dressing was created by George Cruikshank, who showed us Tom and Jerry in this entry on Trollope, and the engraving was produced by his brother Robert Isaac Cruikshank.