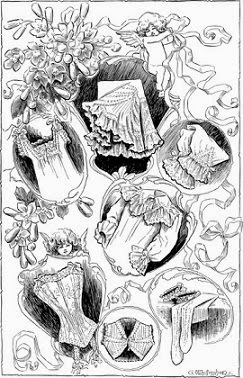 Caroline was a religious woman. Resolute, orderly and unromantic, she would have made an admirable Mother Superior. In her housekeeping and her scrupulous account-books she expressed an almost mystical sense of the validity of small things. But like most true mystics, she was unsympathetic and difficult of approach. Once only did she speak her spiritual mind to Laura. Laura was nursing her when she had influenza; Caroline wished to put on a clean nightdress, and Laura, opening the third drawer of the large mahogany wardrobe, had commented upon the beautiful orderliness with which Caroline’s body linen was arranged therein.

‘We have our example,’ said Caroline. ‘The grave-clothes were folded in the tomb.’

Looking into the large shadowy drawer, where nightgowns and chemises lay folded exactly upon each other in a purity that disdained even lavender, Laura shuddered a little at this revelation of her sister-in-law’s private thoughts. She made no answer, and never again did Caroline open her mind to her upon such matters. Laura never forgot this.

observations: I bet she didn’t – you wouldn’t would you? There are many absolutely splendid moments in this book - for example when Lolly attends a witches’ Sabbath, and tries to apply normal social skills gained when she was a debutante going to balls, but decides ‘It was scarcely possible to praise the floor.’ But this is surely the most startling.

It’s a tremendous book, and must have made strange reading when it first came out, Warner’s first novel. Spinster Laura Willowes goes to live with her brother and sister-in-law (Caroline, above) when her father dies - a rather dull life of duty, though she is much loved by her nephews and nieces. Twenty years later, out of nowhere, she makes a sudden decision to move to a small village.

Her excellent new life is threatened by her nephew Titus, who follows her to the village and nearly drives her mad following her around and joining in everything:

He was invited to become a bell-ringer, and to read the lessons. He burgeoned with projects for Co-operative Blue Beverens, morris-dancing, performing Coriolanus with the Ancient Foresters, getting Henry Wappenshaw to come down and paint a village sign, inviting Pandora Williams and her rebeck for the Barleighs Flower Show.


But all is sorted out when she realizes that the village is a hotbed of witchcraft, and joins in enthusiastically.

Caroline’s comment above is echoed later by Lolly, who is talking to the Devil at the time:

Respectable countrywomen keep their grave-clothes in a corner of the chest of drawers, hidden away, and when they want a little comfort they go and look at them, and think that once more, at any rate, they will be worth dressing with care. But the witch keeps her cloak of darkness, her dress embroidered with signs and planets…

The whole book is one long and wonderful feminist tract. And then tucked away there are minor joys, like a description of how annoying it is to have to wash double sheets when you’ve had a single visitor, and this description of Lolly’s brother:

Laura also thought that the law had done a great deal to spoil Henry. It had changed his natural sturdy stupidity into a browbeating indifference to other people’s point of view. He seemed to consider himself briefed by his Creator to turn into ridicule the opinions of those who disagreed with him, and to attribute dishonesty, idiocy, or a base motive to every one who supported a better case than he.


Halloween has just gone, and this is a witch book of note, but it is also just a great book for all time.

The picture is ‘some dainty lingerie for a bridal trousseau’ from a women’s magazine of 1903.
grave-clothes lingerie Lolly Willowes Sylvia Townsend Warner witch