The Public Image by Muriel Spark 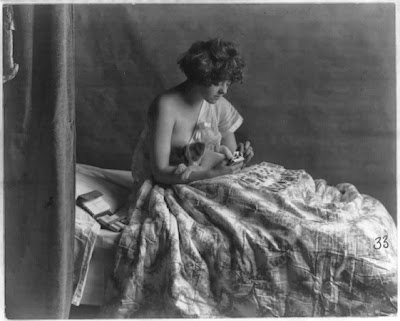 [Annabel is a successful film actress, Frederick is her husband, Francesca is a secretary in charge of publicity]

But then Francesca would come, either to talk to them, or to arrange an interview, or with a photographer to take a picture of Annabel lounging on the bed, in her nightdress, one shoulder-band slipping down her arm and her hair falling over part of her face. Francesca disarranged the bed. She sat Frederick on the edge of the bed, in a Liberty dressing-gown, smoking, with a smile as of recent reminiscence….

‘We must get the two sides of your lives,’ Francesca explained, in case there should be any doubt.

Annabel was entirely aware of the image-making process in every phase. She did not expect this personal image to last long in the public mind, for she intended to play other parts than that of the suppressed tiger, now that she was becoming an established star.


observations: The Public Image was shortlisted for the inaugural Booker Prize in 1969.

This is not one of the better-known Spark books, but it’s a little gem, well worth a read, and surely as relevant now as it was when written. It’s a story about fame, and image, and the press; it’s very funny and clever; and it’s only 125 pages long.

Annabel is becoming a film star. Her husband Frederick considers her to be empty, stupid and vacuous, and has a high opinion of himself:


His mind took the inward turns of a spiral staircase, viewing from every altitude and point of contortion the unblemished, untried, fact of his talent.

He does very little, and deeply resents her success, while happily living on her money. So he makes an outrageous but careful plan to do her down in the most unlikely way. Annabel fights back, and by the end of the book the reader is agog to know what will happen next.

The writing is superb, with lovely details: Annabel makes a film called Minerva Arrived at Platform 10, there is an extended comparison of the stories beloved of the press with the plots of opera, there is mention of ‘tiger in the tank’, an advertising slogan of the time, a friend is called Golly.

It’s hard to know what to make of Annabel: the blurb writer of my Penguin edition *, some reviewers, and – of all people – John Lydon** (aka Johnny Rotten) see her as an egotistical villain. Is this a male reaction? She seemed an excellent character to me: independent, successful, clever, focussed – perhaps not incredibly moral or perfect, but a lot nicer and cleverer than her husband. And the consideration of what happens to a public figure whose image changes struck home a lot in the days of Miley Cyrus - who can blame her for being careful?

*NB do not read the Penguin blurb before reading the book - as well as being idiotic, it has a major spoiler.

The book is set in the filmworld of Rome – as was part of last week’s Beautiful Ruins. The coldly manipulative Frederick came over rather like Harald, Kay’s horrible husband in Mary McCarthy’s 1963 The Group. Muriel Spark has featured on the blog several times before.

The picture is from the Library of Congress.