Dress Down Sunday: The Last Tresilians by J.I.M. Stewart

The Last Tresilians by J.I.M. Stewart 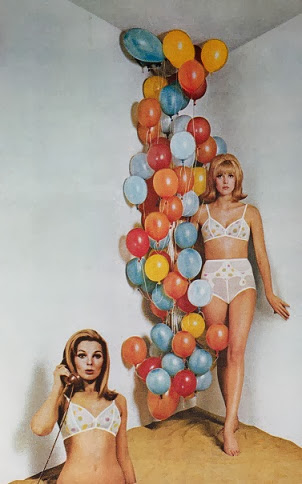 Madrona is an industrialist to be reckoned with. But he’s also very much a fine arts man. It may be a good idea to have a word with him on this business of undesirable advertisements. He may have a line which he’d be grateful to have taken up in the Lords.

Madrona listened. He nodded with an effect of large if undefined agreement…

‘Fascinating, fascinating,’ Madrona pursued. ‘Have you noticed the odd way in which the locale seems to be important? Women’s stockings and underclothes, now – girdles and brassieres and what are called, I believe, foundation garments: why should their advertising be concentrated, as it is, so massively along the escalators in tubes?’

‘It is?’ It was with some promptitude that Burntisland asked this. ‘I hadn’t noticed.’ He didn’t care for talk of the mundus muliebris between males.

Madrona raised his eyebrows a shade above their common pitch. ‘Ah’ he said smoothly, ‘you are probably not an Underground man. But I assure you it is so. Of course, a staircase has powerful emotional suggestions, sexual connotations. You will have noticed it in films. The mounting of a staircase at an accelerating tempo. Most interesting.’

‘No. I’ve noticed nothing of the sort.’


observations: This is the second entry on this book – the first one explains more about it.

One of these representatives of the great and the good is going to turn out to be unnaturally fixated on sex and images, but you wouldn’t necessarily guess which from this extract. It doesn't quite make sense, in terms of the characters' comments - it's almost as if Stewart got them out of sync. Mundus muliebris can mean the world of women, but also more specifically women's means of adornment.

The book is very much locked into the 1960s as it deals with sex and changes in lifestyles and morals, and some of it is quite surprising from someone known for his academic work. Stewart seems more at home in tweed suit and gown discussing port at High table – though there’s enough of that in the book too.

He wrote his detective stories under the name Michael Innes. I quite like Innes’s Appleby books, but I do find them dated, they have not survived so well as some of his contemporaries. There is plenty of snobbishness and elitism in the Innes books (as in many of his contemporaries) and these traits are well to the fore in this book too.

In those tight Levi jeans, and in that anomalous upper garment of American suggestion,[presumably a t-shirt] he must be indistinguishable in the streets of Oxford from a lad out of the motor works.


He is a spectacularly unpleasant young man, rather oddly dumped in the middle of what is plainly meant to be a lovely family. All the characters are left to their fates at the end – everything is abandoned except one single central character who has found out something pretty bad. I could have done with a lot more of the loose ends being tidied up, and while I could see that Stewart was trying to do something very interesting with the discussions on art, it was lost on me. But again: for a different and very convincing view, which almost makes me want to read it again, see the really excellent Penguin a Week blog – the review is here.

Links on the blog: Advertising agencies, producing those worrying pictures, appeared in two recent entries. This Evelyn Waugh heroine is moving down the staircase in proper clothes and a memorable fashion. Quite a few underwear adverts have appeared for Dress Down Sunday – click on the label below – but this is one that you can imagine Lord Burntisland objecting to.