Labor Day: a September picnic with the Little Women

Posted by Clothes In Books on September 02, 2013
Little Women by Louisa May Alcott
published 1868  chapter 12 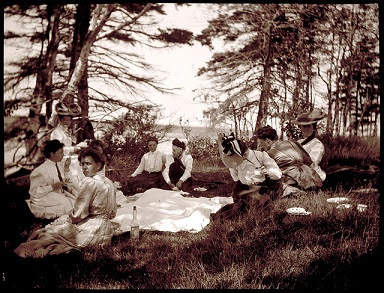 [Invitation to the March girls from Lawrie:]

Some English girls and boys are coming to see me tomorrow, and I want to have a jolly time. If it’s fine I’m going to pitch my tent in Longmeadow, and row up the whole crew to lunch and croquet – have a fire, make messes, gipsy fashion, and all sorts of larks.


‘I’m so glad my French print is clean; it’s just the thing, and so becoming!’ observed Meg complacently. ‘Have you anything decent, Jo?’

‘Scarlet and grey boating suit, good enough for me. I shall row and tramp about, so I don’t want any starch to think of.’…

‘Oh, Jo, you are not going to wear that awful hat? It’s too absurd! You shall not make a guy of yourself,' Meg remonstrated, as Jo tied down, with a red ribbon [a] broad-brimmed old-fashioned Leghorn.

[At the picnic] there was an inviting array of eatable and drinkables… and everyone settled themselves to a hearty meal. A very merry lunch it was, for everything seemed fresh and funny, and frequent peals of laughter startled a venerable horse who fed near by. There were many mishaps to cups and plates, acorns dropped in the milk, little black ants partook of the refreshments without being invited, and fuzzy caterpillars swung down from the tree to see what was going on. Three white-headed children peeped over the fence, and an objectionable dog barked at them from the other side of the river with all his might and main.

'What shall we do when we can't eat any more?' asked Lawrie...

'Have games till it's cooler.'

observations: Labor Day – the first Monday in September, so today – is a big deal in the USA: there is a political and philosophical meaning, as it celebrates the importance and solidarity of working people and trade unions (similar to the May 1st holiday in other parts of the world). But also, it marks the end of the summer, the last day you can wear white shoes (!) and for millions of children is a bittersweet last day of fun before school goes back. I was wondering why the  holiday doesn't feature in literature much – but it turns out that’s hardly surprising in the likes of Little Woman, as Labor Day didn’t exist until the end of the 19th century, and became a federal holiday in 1894.

So this is just a September day out and picnic for the cast of Little Women, and some British visitors (subtly shown as slightly inferior to the Americans, except, surprisingly, in the simplicity of their dress.). But there’s a pleasing pro-worker stance: Mr Brooke, Lawrie’s tutor, says

‘Young ladies in America love independence as much as their ancestors did, and are admired and respected for supporting themselves.’

He is defending Meg, the governess, and later says to her ‘There’s no place like America for us workers, Miss Margaret.’

One more Labor Day detail: Outside the Seattle Art Museum there is an enormous sculpture of a Hammering Man by Jonathan Borofsky, 48 feet tall, celebrating workers everywhere. 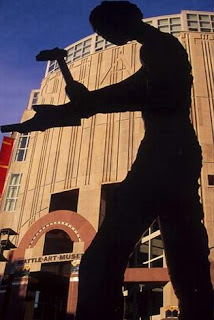 His arm "hammers" silently and smoothly four times per minute from 7 am to 8 pm every day, and it is a splendid sight. But he always has Labor Day off, so is immobile today.

The top picture is from the Nova Scotia archives.

Little Women has featured before – click on the label below.