Posted by Clothes In Books on September 10, 2013
The Private World of the Kennedy White House
published 2004 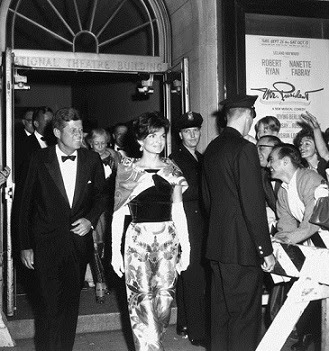 Tuesday night featured a performance at the National Theater of Mr. President, a new Irving Berlin musical inspired by the Kennedy administration, with the $70,000 proceeds benefiting two mental retardation charities in memory of Jack’s brother Joe… While Jackie and their guests went to the theater, Jack stayed behind to watch a heavyweight boxing match between Floyd Patterson and Sonny Liston on closed-circuit television... Kennedy didn’t show up until intermission at ten-thirty. He seemed to spend more time studying his program than watching the stage, turning at one point to ask Bill Walton, “Was the first act as bad as the second?” With a twist dance number, a song titled “The Secret Service Makes Me Nervous,” and a first lady riding a white sequined elephant, the show fell flat for the rest of the audience as well. “Dismal, corny, and hopelessly dated” was David Bruce’s verdict.

The fun came after the final curtain, at a lavish midnight champagne supper dance for six hundred at the British Embassy, its terrace covered by a huge white silk tent decorated with gold braid, gold medallions, and ropes of hemlock and pine entwined with tiny white lights. Jack and Jackie sat at a table next to the dance floor. “Everyone ogled everyone,” Katie Louchheim recalled… Jackie wore an exquisite gown made of pink and gold brocade that had been given to her by King Saud of Saudi Arabia.


observations: Surely it's time for a revival of this show: the Kennedys doing the twist and a white sequined elephant? A guaranteed winner.

This is an immensely detailed and fascinating book, gossipy and revealing, but carefully footnoted and referenced. It tells you what was going on in the outside world, with good accounts of the big political stories of Kennedy’s term of office, but the fun is in the story of Madam’s regime in private. By now the story of JFK’s philandering is no surprise (though this book first revealed some of the now-accepted stories): what was fascinating to me was the view of Jacqueline Kennedy’s character. Gifted, elitist, brought up in upper circles but without any financial security: she’s a challenge to those who claim that the USA has no class awareness. She was overtly snobbish, and her hatred for the press was partly because she wanted to keep her slightly disreputable secrets: she was supposed to wear American clothes but preferred Chanel and Paris. She accepted a lot of gifts, like the dress above. She was very keen on the trappings and luxury of the Presidency, but didn’t see she had to do anything in return.

Of course the First Lady is not paid, and has no official position, but most people might think they could offer something back for everything they receive? Compared with other First Ladies, who use the position for good, her only achievement was to stage a rather precious and snobbish ‘restoration’ of the White House (restored to what? why?) by, basically, selling access to herself to anyone who would donate money or objects to the cause. The other shocking thing in the book is how little time she actually spent in the White House. When Bedell Smith says casually “Most Thursdays Jackie would leave for Virginia with Caroline and John, not returning to the White House until Monday afternoon” it’s a bit startling. One of the most extraordinary facts in the book is that when she accompanied JFK to Dallas that fateful day, it was “the first domestic trip she had ever taken with the President as President.”

A riveting and convincing portrait of two 20th century icons.