- LOOKING AT WHAT GOES ON UNDER THE CLOTHES

The Fashion in Shrouds by Margery Allingham 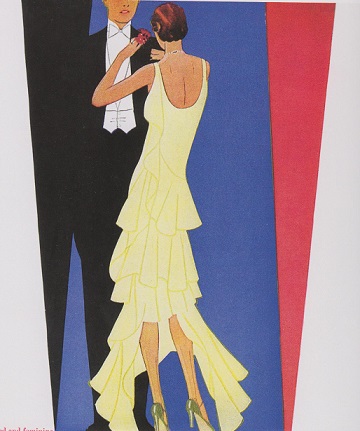 [most of the book’s characters have assembled in a fashionable nightclub. Amanda is dancing]

[Tante Marthe]… sat up, her small shoulders compact and severe. ‘Tell me about your engagement. It is so entirely unexpected.’

‘It is, rather, isn’t it?’ he agreed. ‘Still, Amanda’s an unexpected young person.’

‘She’s sweet.’ Tante Marthe glanced across the tables to the dance-floor. ‘She looks so lovely. Her figure is completely natural. How does she keep her stockings up?’ 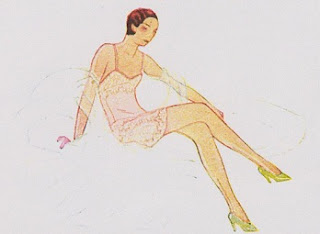 Mr Campion gave the matter his serious consideration. ‘I tremble to think. Two magnets and a dry-battery, if I know her, or perhaps something complicated on the grid system.’

The old woman leant back in her chair.

‘Delightful,’ she murmured. ‘You love her so comfortably. There is no unhappy excitement. I am so glad, my dear boy.’ 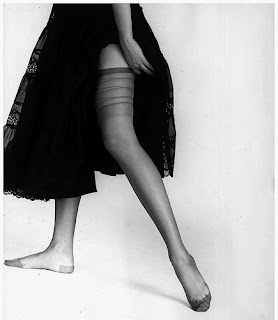 observations: Hold-up stockings – no garters or suspenders needed - were invented rather later than this: here’s an early example from 1957 – thanks as ever to Dovima is Devine.

The best Allingham is surely Tiger in the Smoke, a wonderful book, but a lot of Campion-lovers and clothes-lovers have a soft spot for this one, based in the world of fashion as it is.

Albert Campion’s sister is revealed as a top designer, in business with Tante Marthe above, and the story is funny and tough, and very good on love and marriage and dresses. The plot concerns a larger-than-life actress and her exotic lovelife – are bad things happening to the men in her life? Amanda – an expert engineer, hence the magnets - and Campion are only pretending to be engaged (for now) for a rather unconvincing reason.

The clothes are wonderful and memorable: over many years I’ve wondered about the Lincoln-green face-cloth cape (first page) - does it just mean towelling?

****ADDED LATER: check out the comments below for updates on this****

The fashion house is casually revealed to have had some drug smuggling going on at one point, but they just flung the morphine in a drawer and carried on. It is much more serious when designs are stolen – two women turning up in the same dress is a major catastrophe. Such melodramatic adventures in fashion are an occupational hazard – as explained in this entry.

Georgia, the actress, is a splendid character – horrible in many ways, but you can’t hate her as you should. When a dead body is discovered, her husband bracingly points out ‘a lovely girl looks very touching grizzling over a corpse, but she looks damned silly doing it over a skeleton’ and you can see she won’t make that mistake.

Altogether a wonderful read, enveloping you in the atmosphere of raffish 1938 London and one of those luxury country hotels just outside London, as well as the fashion studio.

Links on the blog: For more Dress Down Sunday click on the label below. The extract above is a flight of fantasy on stockings, but at least Allingham knows her stuff, unlike this modern author writing about the same period, while a 1950s crime story has an intriguing detail about saving your stockings.

The top picture is from a lingerie advert – the smaller one is what she is allegedly wearing under the dress, with ‘an extremely practical concealed girdle with garters’. It is ‘the only foundation one wears beneath dancing dresses.’